Share of theme-park operator Cedar Fair, L.P. (NYSE:FUN) rose 15% last year, according to data from S&P Global Market Intelligence. Though the company mostly missed quarterly estimates, earnings growth was still strong, helping to prop up the stock nonetheless. As the chart below shows, the stock increased thanks to two bullish waves, one in the beginning of the year and one toward the end. 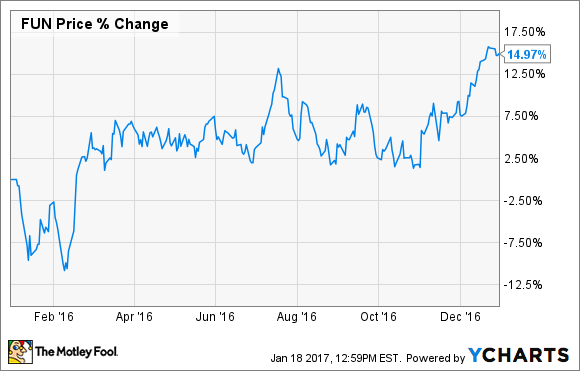 Shares started off the year on a down note, sliding with the rest of the market during the sell-off in the opening weeks of 2016. As a theme-park operator, the company is dependent on its customers' discretionary income and thus tends to be more sensitive to the macroeconomic climate than other stocks.

Not surprisingly then, the stock rebounded quickly when the market came back in mid-February, surging nearly 20% from its bottom to close out the month. On Feb. 17, the company reported record results for 2015, saying revenue grew 7% and earnings per share improved 7% as well. For the actual fourth quarter, the owner of Ohio's Cedar Point and other amusement parks swung to a loss as selling, general, and administrative expenses increased sharply, but since it's a highly seasonal business that generates about all of its profits in the third quarter, investors overlooked that part of the company's results.

The stock hovered near the $60 mark for much of the rest of the year as the company continued to put up record results throughout 2016. The stock then began to surge in November, first on a strong third-quarter report -- following Cedar Fair's peak season -- and then rallied along with the market after the election of Donald Trump.

Cedar Fair could be an appealing pick for those who expect a President Trump to revitalize the manufacturing sector, as many of Cedar Fair's parks are located in parts of the country that were hard-hit by the recession, such as Sandusky, Ohio; Allentown, Pennsylvania; Muskegon, Michigan; and others.

It also should thrive if the economy continues to expand. Cedar Fair stock has been a big winner in recent years, and analysts are calling for a 12% increase in EPS. Given its momentum, the stock should continue to move higher during a sustained economic expansion.