From an earnings point of view, 2016 was a year that Helmerich & Payne, Inc. (NYSE:HP) investors would probably like to forget. But even great companies have to live through hard years. And it's companies like Helmerich that survive the bad times in strong fashion because it's the underlying strength of their business model that investors should be looking to own. In fact, the best move this oil services industry leader made last year was simple: It stuck to the plan. Here's what that means and why the outlook for 2017 and beyond is bright.

On the surface, last year was an ugly one for Helmerich & Payne. The company's top line was essentially cut in half in fiscal 2016. Its bottom line went from $3.85 a share worth of black ink to $0.54 worth of red ink. But if you pull back and look at the bigger picture, 2016 was a year in which Helmerich proved the strength of its business model.

In fact, when reporting fiscal first-quarter earnings in January 2016, Helmerich & Payne CEO John Lindsay noted that the U.S. rig count was at low levels not seen since 1999. That's a lousy backdrop, and it helps explain the weak financial results throughout the oil and gas services industry. But it also obscures the strength at Helmerich & Payne. 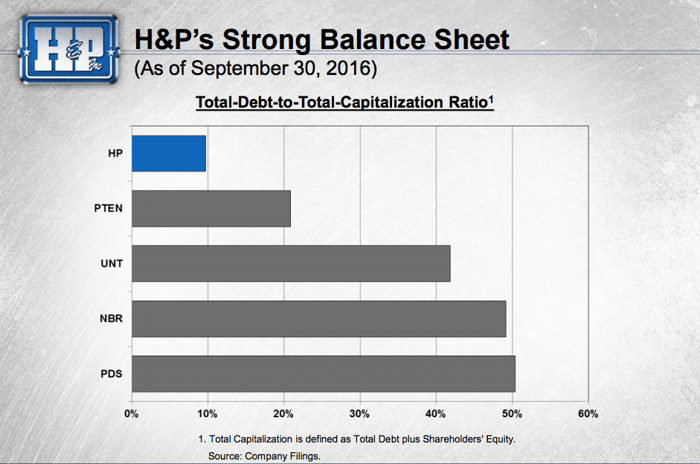 A conservative balance sheet is a key part of the plan. Image source: Helmerich & Payne.

Doing it the same old way

The thing is, Helmerich's best moves in 2016 were essentially the same as they have been for years. The company simply followed the plan. For example, a key part of the company's business is building industry leading rigs for customers. But that business dried up, so Helmerich pulled back on construction. That helped it reduce capital expenditures from roughly $1.1 billion in fiscal 2015 to around $250 million in 2016.

That flexibility is simply part of a model that stresses building when there's demand and curtailment when there isn't. It also helped protect the company's cash flow. Helmerich was able to add roughly $175 million to its cash balance in a brutal year for the industry, even after paying over $300 million in dividends. And it did that without taking on any additional long-term debt.

A conservative balance sheet, by the way, is another key part of the long-term plan in what is a highly cyclical industry. At the end of September, Helmerich & Payne's long-term debt accounted for a modest 10% or so of its capital structure. Nabors' long-term debt, by comparison, was roughly 50% of its capital structure. When it comes to flexibility, Helmerich's boring old plan gives it more room to move exactly when it needs it most, which also helps explain the company's enviable track record of 44 consecutive years of annual dividend increases.

I noted above that Helmerich specializes in industry-leading drilling rigs. That's a key point of the plan. It's fleet is composed of highly desirable AC rigs, which are faster and more efficient than older rigs. But here's an interesting fact: The company has 80 "super-spec" rigs, which have multi-well pad capabilities and allow for the drilling of increasingly complex wells. 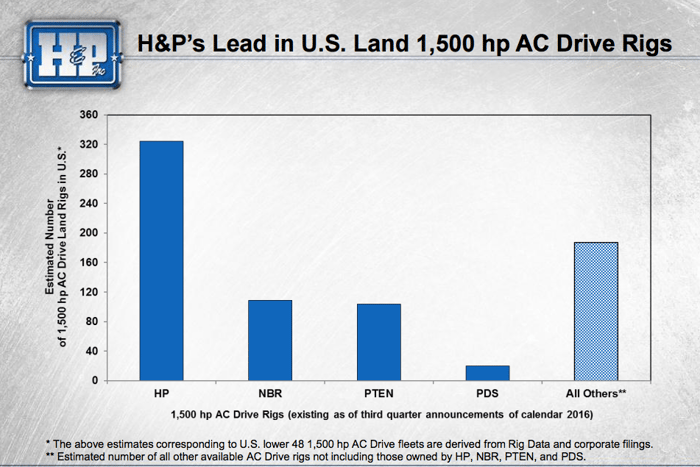 "Super-spec" rigs are the most likely to be in-demand when oil and gas drilling picks up again because they allow drillers to keep costs low. There's limited ability in the industry to build these rigs, according to Helmerich, but the company is confident it could have 120 "super-spec" rigs ready in a few months by upgrading its existing fleet. In fact, it thinks it could eventually offer up 270 of these rigs without building a single new rig. That puts it in a prime position to benefit from the next drilling upturn. Sticking to the high end is just another part of the plan.

Ready for the comeback

Helmerich & Payne is the type of company investors should love. Not only has it survived through one of the worst periods in the oil and gas industry in recent memory, but it's coming out the other side better positioned. This didn't happen by accident; it's the plan. And the company's execution of its long-term plan, through many smaller decisions, was the best move it made in 2016. It's also the move that makes the forecast look so bright for this well-positioned oil and gas services company.