MarketAxess Holdings (NASDAQ:MKTX) reported fourth-quarter results on Jan. 25. The bond-trading network's share of the U.S. high-grade credit market continued its ascent, rising to 17.2% from 15.1% in the prior year period, boosted by a 29% surge in trading volume. 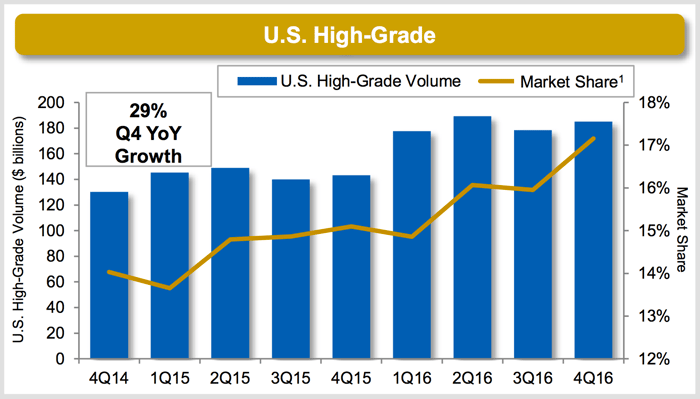 Volumes rose even more sharply in MarketAxess' emerging markets and Eurobonds segments, which were up 59% and 87%, respectively, compared with the fourth quarter of 2015. Impressively, MarketAxess continues to gain significant share in all of its core business lines. 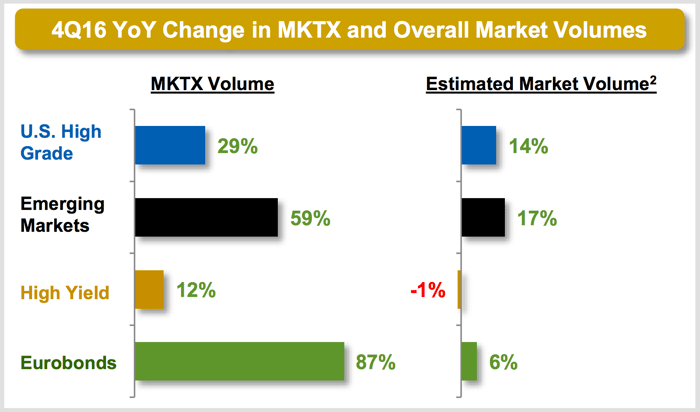 All other revenue -- consisting of information and post-trade services, technology products and services, and investment income -- decreased 1% to $8.9 million, mostly because of currency fluctuations.

With fourth-quarter total expenses rising just 11.2% to $44.1 million -- mainly because of higher compensation, marketing, and consulting costs -- MarketAxess' pre-tax income jumped 36.1% to $50.3 million, as pre-tax margin improved to a record 53.3% from 48.3% in the year-ago period.

Free cash flow rose 29% to $51 million in the fourth quarter and 30%, to $136 million, in 2016 as a whole. This strong cash generation has allowed MarketAxess to reward its shareholders with stock buybacks and rising cash payouts; The company repurchased 62,800 shares in the fourth quarter at a cost of $10.1 million, and MarketAxess' board of directors authorized a 27% increase in its quarterly cash dividend to $0.33 per share.

MarketAxess expects total expenses for 2017 in the range of $192 million to $208 million and capital expenditures of $25 million to $30 million.

While management offered no guidance on revenue, which is affected by difficult-to-predict trading volumes, recent trends point toward solid growth in the year ahead.

"Our fourth-quarter and full-year 2016 results show accelerating revenue and earnings growth, driven by broad based market share gains in all of our core credit products," said Chairman and CEO Richard McVey in a press release. "Clients have responded favorably to the expansion of liquidity solutions, trading protocols, and data available on the MarketAxess trading system. The growth in our network is delivering more trading opportunities and lower transaction costs for credit market participants."