Fiat Chrysler Automobiles (NYSE:FCAU), the world's seventh-largest automaker and often an afterthought compared to its Detroit rivals, struck a chord with analysts Thursday as it announced improved profitability across all of its regions and issued guidance materially ahead of Wall Street expectations. Let's take a look at some overall highlights, key figures, and a couple of important takeaways.

FCA reported its fourth-quarter adjusted EBIT of 1.5 billion euros, a 1% increase compared to the prior year. Revenue inched a similar 1% higher to 29.7 billion euros and unadjusted net income during the fourth quarter doubled to 409 million euros. FCA's adjusted earnings per share checked in at 0.35 euros, or $0.38, just under Zacks' consensus estimates of $0.39 per share.

The NAFTA region (U.S., Canada, and Mexico) was again the driving force behind FCA's top and bottom lines, generating 62% of its net revenue and a staggering 85% of its adjusted EBIT. That result was despite NAFTA shipments declining 5% during the full year. Even with shipments trending lower, FCA's adjusted EBIT was 15% higher for the full year, thanks to more-profitable Jeep and full-size truck sales, and margins expanded by 100 basis points, from 6.4% during 2015 to 7.4% last year. 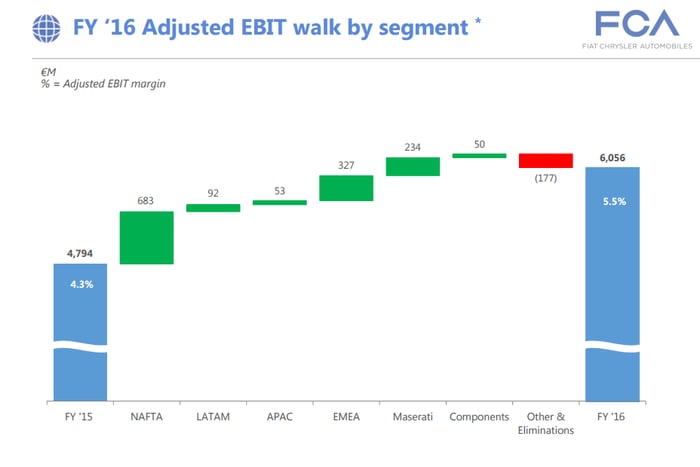 While FCA just posted improved profitability in all of its regions, its turnaround story is still gaining traction. One of the key factors in its ultimate success or failure will be its ability to expand its Maserati brand -- and FCA definitely took a step forward on that front in 2016.

Global shipments of Maserati increased 30% to more than 42,000 units, driven by the launch of the all-new Maserati Levante. The increased shipments helped drive net revenue 44% higher and adjusted EBIT 223% higher. One thing for investors to watch is just how high Maserati's margins can go. In 2015, Maserati's adjusted EBIT margins were 4.4%, much lower than luxury brands should record, and that jumped to a more suitable 9.7% during 2016.

Looking ahead, 2017 appears to be another transition year for the automaker, with modest top-line growth and a tougher first quarter due to NAFTA "manufacturing changes." Net revenue is expected to move from 111 billion euros in 2016 up to between 115 billion and 120 billion euros in 2017. Adjusted EBIT is estimated to check in above 7%, compared to 6.1% in 2016, and adjusted net profit at slightly above 3 billion euros. As long as SUVs and full-size trucks drive profitable sales in NAFTA and FCA continues to expand its Maserati lineup, 2017 should be another step in the right direction for the automaker.