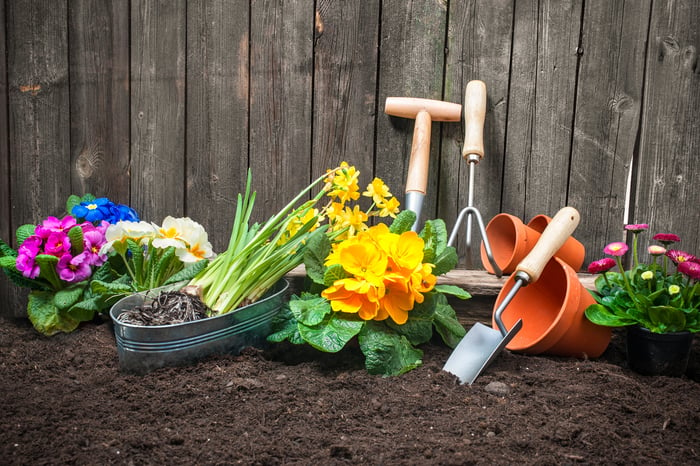 In the past several years, management at The Scotts Miracle-Gro Company (NYSE:SMG) has restructured operations and the senior executive team to deliver more efficient value creation opportunities for shareholders. The move was risky for a company so heavily influenced by seasonality, but it appears to have paid off. Revenue has grown from $2.5 billion in fiscal year 2012 to $2.8 billion for the fiscal year ended in September. Income from operations has more than doubled in the same period, from $213 million to $459 million.

It should be no surprise, then, that the stock has gained 133% in the past five years with dividends included. What may be surprising is that a good chunk of that rise came from 53% gains in 2016 alone. 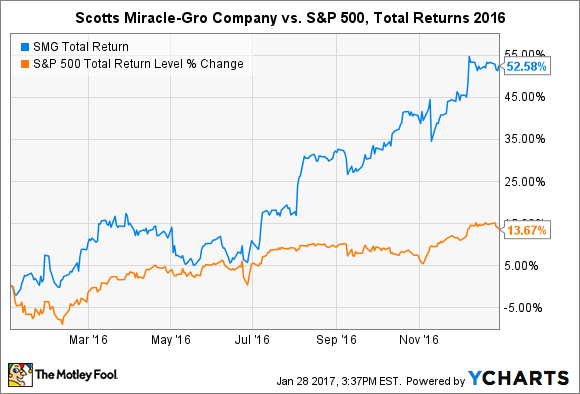 That handily beat the S&P 500, so investors may be wondering if they should lock in gains from the stock, but I think that could be a bad idea. Here are three terrible reasons to sell The Scotts Miracle-Gro Company.

Stocks can go up for any number of reasons, some of them very silly reasons. That wasn't the case with The Scotts Miracle-Gro Company, though. The world's leading consumer lawn and garden supplier earned every bit of its stock gains in 2016.

As I alluded to, profits soared last year. The company's EPS registered at an eye-popping $5.16. However, after divestitures and acquisitions, it's wise to adjust this figure to account for only continuing operations. Even then, GAAP net income was an impressive $4.15 per share -- well above $2.27 per share from the year-ago period.

Healthy profits handed The Scotts Miracle-Gro Company a trailing price-to-earnings ratio of just 14 last July, which catalyzed the amazing run in share gains through the second half of the year. Despite a soaring stock price, the trailing P/E sits at a historically low 18.5 today. 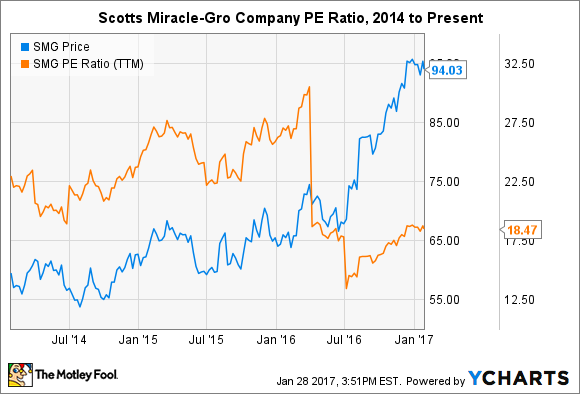 Analysts are expecting future earnings to dip, as evidenced by a forward price-to-earnings ratio of 19.8, according to Yahoo! Finance. However, management has guided for full-year 2017 EPS of $4.10 to $4.30, which hints that analysts may be forced to revise their earnings estimates upward -- and that the stock is still historically cheap entering the year.

Because of the inherent seasonality of the consumer lawn and garden market, The Scotts Miracle-Gro Company has to rely on revolving debt facilities to smooth out finances throughout an entire calendar year. That isn't a red flag, but when coupled with a modest level of long-term debt, it can result in relatively high interest rate expenses.

Consider that the company spent $65.6 million in interest expenses during fiscal 2016. That may not seem like much, but it's equivalent to an earnings hit of $1.09 per share. It has also been growing in recent years.

While not ideal, so far this hasn't stung investors. The company has been able to manage rising profitability with rising interest expenses in recent years, and judging by 2017 guidance, thinks it can continue to do so in the year ahead. It's also worth noting that management proposed to offer $250 million in debt notes last December and apply net proceeds to reduce the balance on its revolving credit facility. If completed, the transaction could result in lower interest expenses this year and boost near-term earnings.

The Scotts Miracle-Gro Company has three operating segments: the United States, Europe, and other. Although total sales have grown in each of the past three years, the European segment hasn't done investors any favors. Consider the breakdown of the company's revenue sources dating to 2014:

The company has seen a sharp decrease in business from Europe because of a series of factors. That includes strategic decisions to exit certain businesses, a very strong U.S. dollar, and decreased selling prices. However, other segment sales have been soaring thanks to a number of recent acquisitions, including several in professional hydroponics equipment providers. In other words, investors shouldn't see a decline in what has been the second-leading segment as a red flag, and be encouraged that growth investments and products are more than picking up the slack. It could even spawn a new, high-growth segment in the near future.

Impressive stock gains could make investors consider selling a company to lock in gains. You may find yourself in that position with The Scotts Miracle-Gro Company after a 53% total return in 2016. But if you take a deeper look at the driving forces behind the gains, then it becomes apparent that the stock could continue its ascension for the foreseeable future.