The for-profit education sector has had it rough over the past few years. Its big names, such as Apollo Education Group (NASDAQ:APOL) and DeVry Education Group (NYSE:ATGE), have been investigated and fined by government agencies for allegedly defrauding students, among other sins. 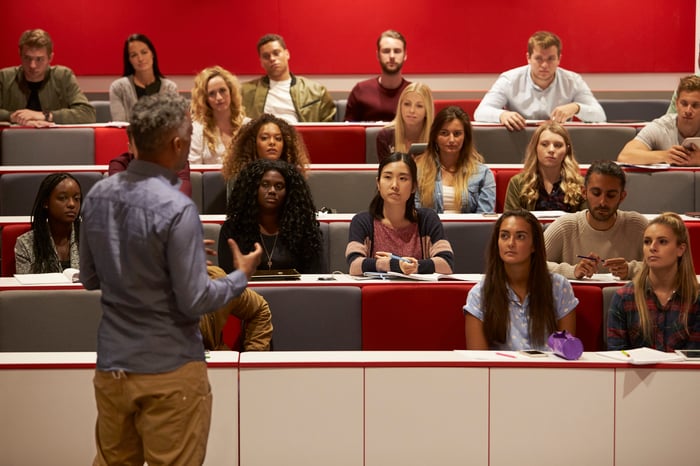 But that was one administration ago. Given that the current president was once at the head of a for-profit college, the environment might become much more friendly for such institutions. Likely with this in mind, a veteran fee-based learning company, Laureate Education, is about to (re-)launch on the stock exchange.

Learning around the world

Laureate Education is the successor company to Sylvan Learning Systems, a tutoring services company founded in 1989. After a pivot toward the higher education segment, in 2004, Sylvan was rechristened Laureate Education and spent several years as a publicly traded company before going private in a $3.1 billion deal in 2007.

Over this history, thanks in no small part to an aggressive acquisition strategy, it's managed to grow its network to 71 institutions. This makes it the largest for-profit higher-education purveyor in the world. Its largest regional market is Latin America, home to 29 of those facilities. All told, Laureate enrolls over 1 million students.

Expansion isn't cheap, nor is maintaining a clutch of universities and keeping them staffed. The company's costs and expenses are high, typically running at around 93% of total revenue. The top line grew at a healthy rate from fiscal 2011 to 2014, rising from almost $3.4 billion in the former year to the $4.4 billion of the latter. 2015, however, saw a drop-off, to just under $4.3 billion.

Laureate's pile of debt is growing -- it stood at over $4.2 billion as of the end of Sept. 2016 -- and servicing this has contributed to a series of net losses over the years. Since 2011, the company has posted bottom-line shortfalls ranging from 2013's nearly $70 million to last year's $316 million. Not coincidentally, interest expense over the past five years has grown steadily, from $277 million to $398 million.

In various parts of the world, the global higher-education market is ripe for growth. According to data from financial services company GSV Advisors cited by Laureate, the market, as a whole, should expand at a compound annual growth rate of 5% through 2020.

Another positive is that Laureate is very active in markets that are underserved. In Mexico, where it operates the country's largest private university, the population only had a higher education participation rate of 22% as of 2013, while the figure was 32% in Brazil -- another one of the company's important markets.

Meanwhile, investors are clearly expecting the regulatory heat on the for-profit sector to cool down with the new administration in the White House. Apollo Education Group shares saw a nice jump after Election Day, despite inking a deal to sell itself to a consortium of private investors months before. DeVry's stock rose by over 20% and has moved upwards since then.

But investors shouldn't get too hyped up about either of these developments. Yes, many of Laureate's markets have room for growth, but these tend to be relatively poor countries. Many would-be students there simply don't have the money to pay tuition.

And although the ascension of a for-profit university figurehead to the U.S. presidency might be heartening, it's far from assured that this will get the feds off the sector's back. Even if this happens, the eventuality is already baked into the prices of the sector's existing stocks following those November price pops.

Meanwhile, Laureate's recently eroding revenue is a concern. Since there likely won't be a sudden surge of enrollments, the company's options for growing the top line seem limited and unlikely to materialize in a meaningful way. That might mean it'll have to crank up the acquisitions again. This would add to the already considerable debt pile, and by extension, those profit-sapping debt-servicing payments.

Although there's potential in the for-profit education sector, if I were sniffing around for new stocks, I'd probably give Laureate a miss for now. There's too much red ink for my taste, revenue isn't going in the right direction, and there are big question marks about the regulatory environment just now.

Twenty-nine million shares of Laureate Education are to be sold in the offer at a price of $17 to $20 apiece. The stock, which is slated to begin trading publicly on Wednesday, will be listed on the Nasdaq under the ticker symbol LAUR.

The company will use the proceeds from the IPO largely to retire debt. Laureate Education does not intend to pay a dividend in the proximate future.