Shares of Ritchie Bros. Auctioneers (NYSE:RBA), the world's largest auctioneer of industrial and agricultural equipment, soared 46% higher during a strong 2016 -- and that impressive gain includes a pullback at the very end of the year. 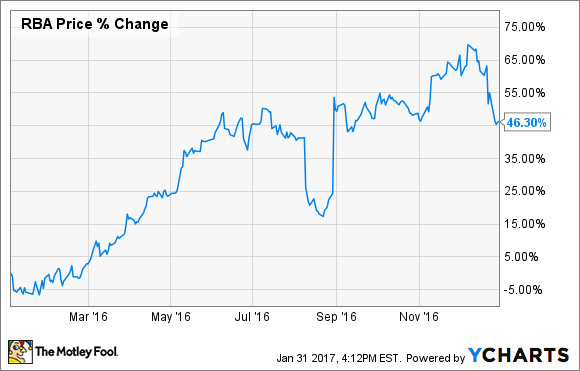 There were a couple of major factors driving Ritchie Bros.' stock higher last year. First, its gross auction proceeds (GAP) continued to increase. For the full year, GAP rose 2% to $4.33 billion, and on a constant currency basis, GAP was 3% higher than in 2015.

Second, Ritchie Bros. sold $2.1 billion of equipment to online buyers, which now account for just under 50% of its total GAP. That's an impressive rise considering that less than 35% of sales were generated online at the beginning of 2012. Increasing online sales has been a focus for Ritchie Bros., and during 2016, management made an announcement of plans to acquire IronPlanet, a major online auction competitor.

"This acquisition will help accelerate our growth in revenue and earnings and add shareholder value by continuing to expand our capabilities in new channels, sectors, regions and customer segments. Ritchie Bros. and IronPlanet both have talented teams and winning cultures built on a passion for serving customers." said CEO Ravi Saligram in the press release.

Looking forward, good times should continue for investors, as new management, which took over during the summer of 2014, emphasizes higher return on capital and asset productivity. Ritchie Bros. also boasts an industry-leading network because its sheer size, auction lots, and experience encourage more sellers to use the company, which brings more product selection, which brings in more buyers -- and then a larger buyer base attracts more sellers and the virtuous cycle continues. All of those factors in combination with increasing online sales should drive the company's top and bottom lines higher over the foreseeable future.