Please ensure Javascript is enabled for purposes of website accessibility
Log In Help Join The Motley Fool
Free Article Join Over 1 Million Premium Members And Get More In-Depth Stock Guidance and Research
By Brian Feroldi - Feb 6, 2017 at 10:05AM

A handful of positive developments caused shares to rally.

Shares of MannKind (MNKD 4.89%), a commercial-stage biopharma focused on inhaled insulin delivery, rallied 11.5% during January, according to data from S&P Global Market Intelligence. 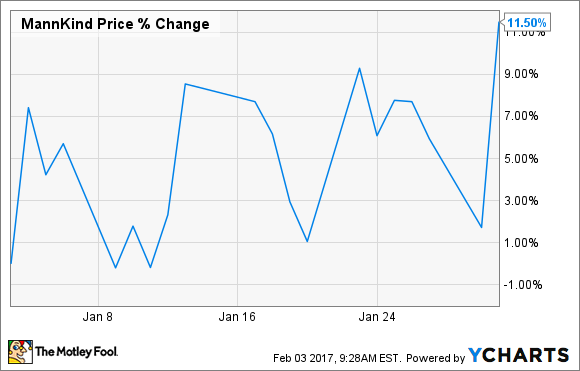 Shareholders can credit the gains to a series of positive news items released during the month.

Here's a quick recap of the key announcements:

When combined, these moves should provide the company with a little bit more breathing room financially, hence the rally in the share price.

Unfortunately, the month's double-digit gains proved to be short-lived. MannKind's stock took a tumble in early February after the company announced that it will be holding a special meeting of stockholders on Feb. 24 to vote on a potential one-for-three or one-for-10 reverse stock split. The company made this announcement in response to a letter from the Nasdaq that threatened to delist the company's stock unless it gets its share price above $1 per share for 10 consecutive days between now and March 13.

MannKind CEO Matthew Pfeffer stated that being delisted would be "disastrous for the company on many levels," hence his push for a special vote.

I for one agree with CEO Pfeffer that a reverse stock split would be in the best interest of the shareholders. However, traders do not appear to share that point of view.

Regardless of the stock's short-term price movements, the company's future remains completely dependent on the successful relaunch of Afrezza. Will the company's recent maneuvers reignite interest from patients and providers? We won't know the answer to that question for several more quarters.