Shares of Stratasys (NASDAQ:SSYS) jumped 19.2% in January, according to data from S&P Global Market Intelligence. The diversified 3D printing company's stock has gained 16.4% in the one-year period through Feb. 6. 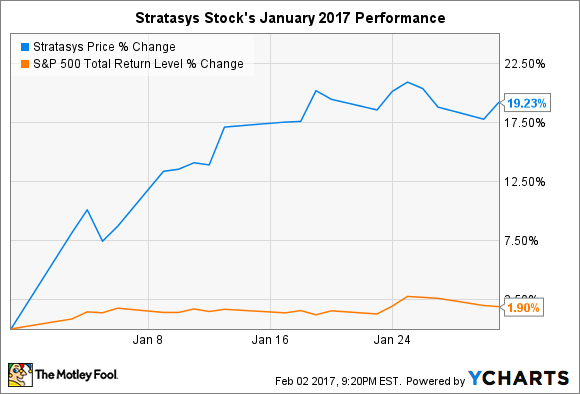 The only material news about Stratasys during January, in my view, was that it announced the appointment of two new top executives. A new CFO came on board at the start of the year, while a new CEO took over at MakerBot, the company's desktop subsidiary, in mid-January.

Both execs who previously held these positions reportedly resigned on their own, though we can't know for sure what went on behind the scenes. The fact that the former CFO is staying on in an advisory capacity does lend support to the theory that he voluntarily stepped down. Indeed, my impression is that former CFO Erez Simha was well regarded. I can't speak to the former CEO of MakerBot, which is in the midst of a turnaround.

So I don't think Stratasys stock's strong performance in January had much, if anything, to do with the changing of the guard in these two key positions. That said, both newly appointed executives seem well qualified.

So why the 19% stock pop? It seems likely that a fair number of investors bought shares because they believed that Stratasys' stock has simply been too beaten up, especially when compared with shares of 3D Systems, which soared 53% in 2016. Shares of Stratasys declined sharply in 2016 -- nearly 30%. The two companies' respective business performances didn't justify the nearly 83-percentage-point spread in their stock performances in 2016, in my opinion.

At first glance, this "normalizing with the primary peer" theory might appear weak, since shares of 3D Systems moderately outperformed those of Stratasys in January -- 24.1% to 19.2%. However, there was a reason behind the bulk of 3D Systems' pop: Shares soared nearly 16% after rumors surfaced that General Electric had approached Triple D about a buyout.

Investors shouldn't change course based on the rise in Stratasys' share price. The company's business performance and outlook remain the same as they were before the start of 2017.

Investors will, however, be getting some material news soon, as Stratasys is expected to report its fourth-quarter and full-year 2016 earnings in early March. The company hasn't set an exact date and time, as of this writing.