Shares of Teck Resources Ltd (NYSE:TECK) rose an impressive 21% last month. That, of course, comes on top of the metallurgical coal, copper, and zinc miner's nearly 420% advance in 2016. Last year's performance was driven by a mixture of things, including a broad commodity price rebound, improvements on the company's balance sheet, and continued progress at its Fort Hills oil venture. January's gain, meanwhile, was a little more nuanced.

The big news in January was all about commodity prices. On the positive side, zinc and copper both headed higher during the month. Since roughly 65% of the company's business is tied to those two metals, their price moves were clear positives. It's worth noting that Teck is one of the largest zinc producers in the world, so that commodity's 11% advance was a notable event.

Things were a little less clear on the met coal front. Met coal, which accounts for around 35% of Teck's business, actually fell nearly 25% in January. That came after a massive price advance toward the end of 2016. At first blush, you'd expect this to have been a material headwind for Teck's stock in January. However, the company's first-quarter contract price was set at $285 per tonne in late December, effectively locking in a good first quarter despite the fact that spot prices are now below that price level.

All told, January was filled with more positives than negatives. And any windfall profits from the coal business can be put to good use further reducing Teck's debt load. 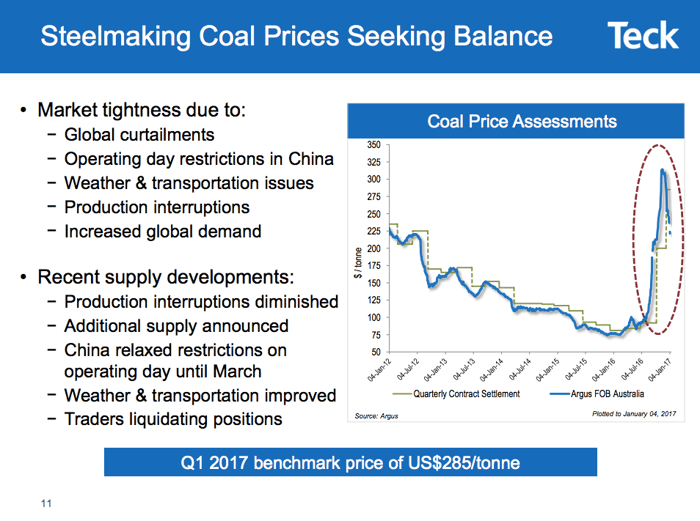 Teck is no longer facing the same financial risks that it was when 2016 started. And while it still has plenty of opportunity to improve the outlook of its business, most notably getting Fort Hills oil flowing, 2017 isn't likely to see a repeat of the 400% advance last year. In other words, don't look at January and think it's just a small step toward a much bigger gain. It would be wiser to take January's 20% jump with a grain of salt and focus more of your attention on the fundamentals of the business.