The pioneer in robotic-assisted surgery, Intuitive Surgical, Inc. (NASDAQ:ISRG), announced the results of its most recent quarter and full-year 2016 on January 24. Investors seemed to like what they saw, as the stock rose 5% the following day. Now let's look at a few of the most telling metrics from this most recent quarter and see what they reveal. Revenue for the quarter was $757 million, up 12% over the prior year. This revenue comes from three sources: system sales, instrument and accessory sales, and service revenue. System sales were up only 2% to $236 million. This was probably the most disappointing aspect of Intuitive's results since all other revenue flows from system sales -- it's the razor in the razor-and-blade business model. Service revenue increased 12% to $135 million. Instrument and accessory revenue was up 19% to $386 million.

Recurring revenue was 69% of total

I believe that one of the most important aspects of the company's revenue is the recurring portion. Once a system is sold, it continues to generate revenue. These recurring revenue sources -- instrument and accessory sales and service revenue -- accounted for 69% of the revenue generated for the quarter, up from 66% the prior year. For the full year, this accounted for an even more impressive 71% of revenue. A larger percentage of recurring revenue helps to decrease the lumpiness that results from system sales, so this is great news.

Net income for the quarter was $204 million, up 7.4% over the prior year. Normally, I like to see net income grow faster than revenue, but there's a good reason why the opposite is true in this case. Intuitive has been investing a higher percentage of its revenue in research and development, and those expenses are up 31% over the prior period. Intuitive also plans to increase that spending in the coming year as it prepares to bring its next generation Sp (or "single port") system to market for use alongside the da Vinci Xi. This is an important advancement in Intuitive's technology and should allow it to maintain its dominance in the space. Sale, general and administrative expenses are also up 21%. Intuitive explained during the conference call that this was a result of increased headcount and investment in its sales organization outside the U.S. in an effort to increase sales internationally.

System shipments were up 3%

The total number of da Vinci surgical systems shipped is typically a good indicator of success. In the most recent quarter, the company shipped 163 systems, which was 3% more than last year's 158. Drilling down a little deeper, system sales in the U.S. increased 20%, while sales outside of the U.S. fell 16%. The results outside the U.S., particularly in Europe, bear watching. Intuitive Surgical indicated that its European customers wanted to see "country-specific clinical and economic data for emerging procedures," and Intuitive is confident in the long-term opportunity there. The total installed base of systems grew 9% for the year to 3,919. It is also worth noting that 75% of the systems sold were the Xi.

The number of procedures performed with the da Vince grew 15% for both the quarter and the full year. This is an important metric. Not only are consumables used in each procedure, but there are only so many hours in a day and a limited number of procedures that can be performed using each system. As procedure volume on the installed base of systems grows, hospitals invest in additional systems to keep up with demand and grow their practices.

Back in December, Intuitive announced an increase in its share buyback authorization to $3 billion. In conjunction with its earnings release, the company announced an accelerated share buyback of $2 billion of that amount. It planned to finance that purchase with cash and investments on hand, which amounted to $4.8 billion at the end of the quarter. It will retain the remaining $1 billion of the repurchase authorization to make opportunist purchases as the company sees fit.  At first glance, this might seem an excessive use of cash, but the company added nearly $1.5 billion over the preceding 12 months, so this is about 16 months worth of cash generation. It will also retire 2.4 million shares or 6% of currently outstanding 40 million shares. This will increase the share of the pie for existing shareholders.

Overall, this was a very solid quarter. Though progress in Europe remains to be seen, the majority of financial metrics improved incrementally. While short-term pops following earnings releases are nice, they should be viewed through the lens of longer term performance. A review of the results going back three years shows that this is indeed part of a consistent trend: 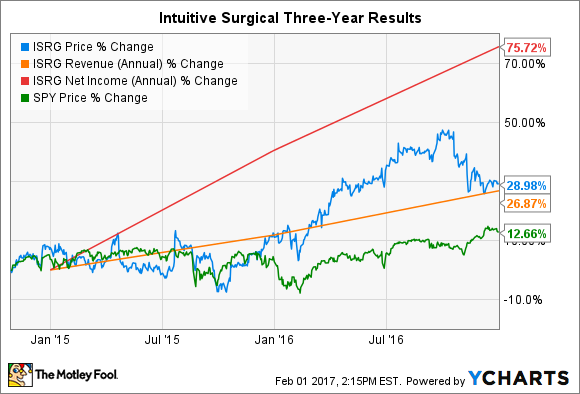 I remain bullish regarding the long term potential for Intuitive Surgical, though I doubt we will see a return to the frothy growth exhibited in its earlier days simply because this is a more mature company now.