One thing that should be pointed out here is that these two companies appeared to be in the most trouble following the drop in oil and gas prices starting in 2014. CARBO was heavily reliant on its manufactured ceramic proppant, which was more expensive and a less popular option for producers looking to cut costs. Emerge's troubles stemmed from the fact that its debt loads were simply too much. There was even a point at the end of 2015 where the company had violated its debt covenants and had to renegotiate with its creditors. 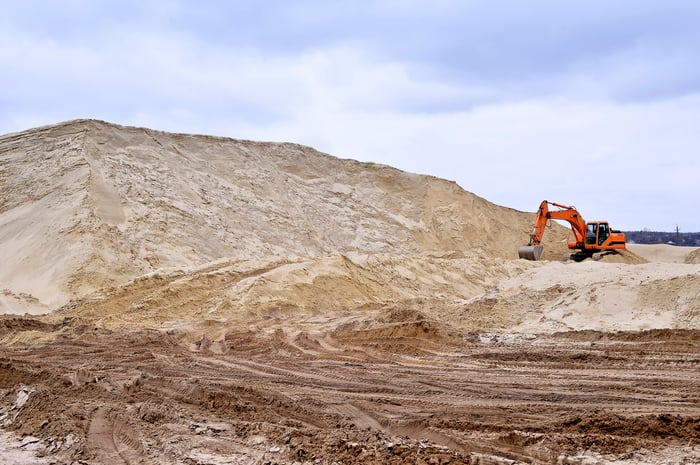 On top of that, they were losing market share to competitors. During the first nine months of 2016, Emerge's total sand volume sales slipped 53% whereas U.S. Silica Holdings (NYSE:SLCA) saw only a 4% decline and Fairmount Santrol Holdings (NYSE: FMSA) actually increased volumes by 3%. They were more willing to take a hit on price in order to preserve market share, which led both Emerge and CARBO Ceramics to some of the largest revenue declines among their peers. 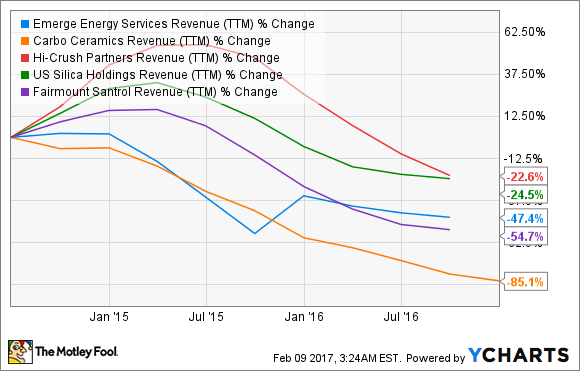 This past month, though, CARBO Ceramics showed a rapid reversal in its fortunes when it reported earnings on Jan. 26. The company announced that sequential revenue was up 44% for the quarter and, probably more importantly, that its ceramic proppant sales were up 41% sequentially as well.

Emerge has yet to report its earnings, but analysts at Goldman Sachs predict bright times ahead as it upgraded the stock last month to overweight. One thing that Goldman mentioned in its upgrade was that Emerge had a lot of unutilized capacity that will likely be absorbed by the oil and gas industry in the coming year or so. The larger producers that maintained market share -- U.S. Silica and Fairmount Santrol -- are currently running their mines at 75% or better of their nameplate capacity, whereas Emerge's mines in Wisconsin are only operating at 37%. This should leave the company with lots of opportunity to pick up incremental demand in the market.

Keep in mind that CARBO Ceramics is the only company that has so far reported earnings for the quarter and fiscal year. While it would be surprising if we saw revenue and volume increases as large as CARBO's, investors should expect some strong upticks in revenue for all of these companies. The trend of higher proppant use per well means that we will likely see sand demand outpace overall increases in drilling activity. This should bode well for all stocks in the industry.

As for Emerge, it is probably best to see what the upcoming quarter has to offer before making any decisions. It still has to deal with its debt load a bit before it can start paying out a distribution to shareholders, and it will take some spending to get those underutilized mines back up and running.