India is the world's second most populous country, its biggest democracy, and its sixth-biggest economy. And now, it appears to be the next big prize for Amazon.com (NASDAQ:AMZN).

When Amazon spots a market opportunity, it goes all in after it. In the past, the company has jumped on nascent markets in e-commerce, e-books, video streaming, and cloud computing. Its ability to recognize opportunities and take advantage of them is one of the biggest drivers of its success. 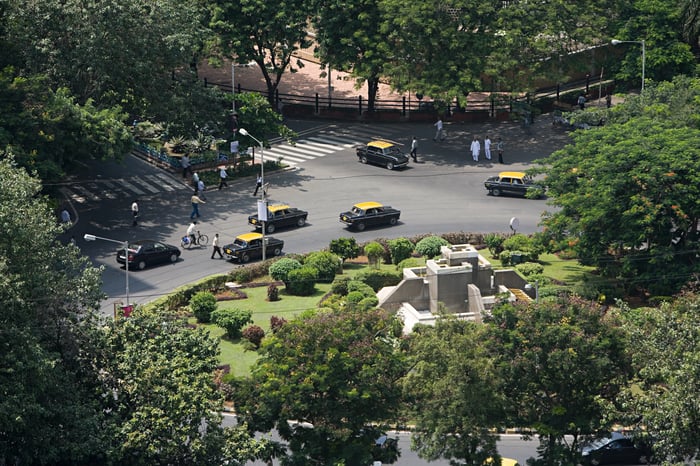 Now, on a global scale, India may be the company's next big opportunity. Amazon announced it would invest an additional $3 billion on the subcontinent last year, and CEO Jeff Bezos has ordered his deputies to "do what it takes" to win the Indian market, where the company faces stiff competition from China's Alibaba and native players Snapdeal and FlipKart.

What makes India so special

India presents a unique e-commerce opportunity for several reasons. The country currently has 1.3 billion people, about four times the population of the U.S., and is on track to surpass China as the world's most populous country in just five years, according to the U.N.

Its economy is growing 5% annually. Much of the population is tech-savvy, with smartphone penetration reaching more than 30%, making it the world's second-biggest smartphone market after China. About 10% of Indians speak English, giving it the second-largest English-speaking population after the U.S., and thus making it an ideal market for Amazon Video, which the company launched internationally at the end of 2016. Finally, India is densely populated, with 1,033 people per square mile, compared to the U.S., which has just 85 people per square, and its retail industry is highly fragmented, without dominant entrenched brands occupying positions similar to what Wal-Mart, for example, holds in the U.S.

Those two factors make the country an ideal market for an e-commerce operator like Amazon. The high population density means shipping would be much easier and cheaper than in the U.S., especially if the company can master drone delivery, and the highly fragmented nature of the retail sector makes the benefits of e-commerce even more desirable and the competition weaker.

What is the company doing?

In 2014, Amazon announced a $2 billion investment in India and followed that with another $3 billion last year for a total of $5 billion. Due to Indian regulations, Amazon operates only a marketplace in India, selling goods through third-party vendors, but it handles the technology infrastructure and most of its vendors' deliveries. Building out its own delivery network, as opposed to relying on UPS or the Postal Service as it does domestically, is costly. Amazon also seems to have learned lessons from China, where it failed to adapt significantly to the local market and fell well behind the competition.

The company stepped up its efforts on the subcontinent in December when it launched its video streaming service as part of Prime, for an annual fee of just $15. Amazon is offering a one-year trial for half that price, just $7.50, a notable contrast with Netflix, which launched its service globally at roughly the same $10-a-month price tag the company charges in the U.S., as it says it's targeting elites rather than offering a mass-market product. Amazon, as usual, is content to grab market share now and worry about profits later.

Amazon isn't the only one paying attention to the Indian market, of course. Apple has also noticed a big opportunity, and it's increasingly touting its growth in India on its earnings calls -- smartphone shipments grew 18% in the country in 2016, and it sold 2.5 million iPhones there.

Amazon has always been willing to play the long game, investing for the long term is one of Bezos' core mantras, and he promised his first shareholders as much. The Indian e-commerce market is still small, but it's growing fast: Sales more than doubled from $6.3 billion in 2014 to $16 billion in 2015. If Amazon can repeat its performance in the U.S., where it controls about one quarter of e-commerce sales, its Indian operations could be huge in just a few years.

The company does not break out results by country, but its investments abroad are apparent from its financial statements. While operating income spiked in North America and in Amazon Web Services last year, its international operating loss widened from $699 million to $1.28 billion, evidence of investments like those it is making in India.

Though it will be several years at least until Amazon generates a profit in the region, the company is making the right move by investing heavily in the subcontinent. Its size and growth make it a unique opportunity for the company, and Amazon has shown time and again that it recognizes the wisdom of breaking into an emerging market early.