Crude oil has stabilized above $50 per barrel, which is right in the sweet spot for a select group of oil stocks. What makes these companies unique is that they control prime positions in America's best shale plays, which, thanks to a combination of factors, are now very profitable at current commodity prices. This scenario has the following crude oil stocks forecasting robust production growth rates, and that could create tremendous value for investors in the future.

Before the oil market downturn, EOG Resources was one of the fastest-growing large-cap oil producers in the country. However, it slammed the brakes on growth once crude started to plunge and refocused its attention on driving down costs and improving well productivity to boost drilling returns. Those initiatives have proven to be wildly successful as EOG Resources has been able to identify roughly 6,000 drilling locations spread across several shale plays that can earn premium returns in the current market environment, which it defines as 30% after-tax at flat $40 oil. EOG Resources expects to use that drilling inventory to fuel 15% to 25% oil growth through 2020 at $50 to $60 oil, respectively. That's a remarkable growth rate for a company of its size. 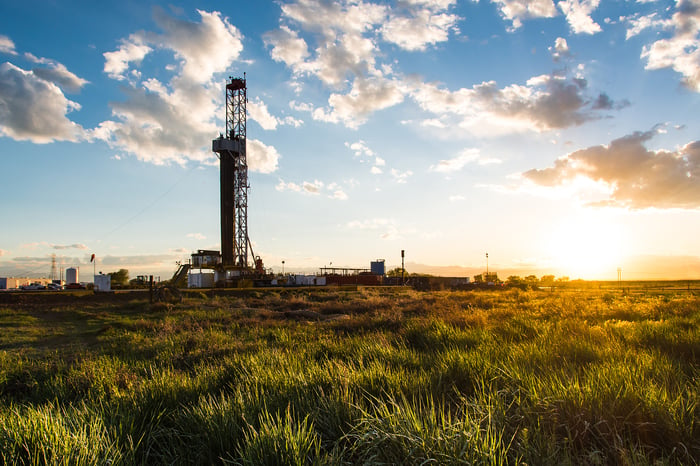 Repositioned and ready to roll

Anadarko Petroleum spent much of the downturn focused on repositioning so it could grow at lower oil prices. However, aside from driving down costs, the company also restructured its portfolio by jettisoning some lower-margin gas assets and its Eagle Ford shale position, while bulking up in the Gulf of Mexico. As a result, Anadarko Petroleum controls a cash cow in the Gulf that it intends to use to fuel robust production growth from its shale position in the Delaware Basin side of the Permian Basin and the DJ Basin in the Rockies. The company expects these two shale plays to fuel double-digit compound annual oil output growth over the next five years as long as crude is between $50 to $60 per barrel.

Powered by the Permian

Unlike EOG and Anadarko, which expect several shale plays to fuel growth going forward, Pioneer Natural Resources has one focus: the Midland Basin portion of the Permian. While the company does control some land in the Eagle Ford, it is currently the largest acreage holder in the Midland by a long shot. More importantly, that prime Permian real estate holds an estimated 11 billion barrels of oil equivalent resource potential according to Pioneer. Its rocks are so saturated with hydrocarbons that the company expects to drill 20,000 future wells on its acreage position. It recently unveiled a 10-year development plan that it expects will grow production and cash flow by a compound annual growth rate of 15% and 20%, respectively, by 2026 as long as crude averages $55 per barrel. If it can achieve those robust growth rates, its output would average 1 million BOE/d and its cash flow could top $10 billion annually.

Devon Energy has taken Anadarko's approach during the downturn, focusing most of its efforts on adding to its ability to grow by subtracting non-core assets that were holding it back. As a result, the company now has a portfolio it can be proud of, which includes prime spots in both the Delaware side of the Permian and the STACK play of Oklahoma. It plans to use these regions to restart production growth this year, with it expecting oil output to rise by double digits compared to where it ended last year. Furthermore, thanks to the high-margin nature of these wells, Devon Energy sees its cash flow soaring and anticipates that it will deliver peer-leading cash flow growth this year, putting it in the position to accelerate its oil growth rate next year.

Concho Resources has one thing in common with all the other oil stocks on this list, which is a prime position in the Permian Basin. However, what's unique about Concho compared to rival Permian pure-play Pioneer Natural Resources is that it controls land across the basin and not just in the Midland, which gives it more opportunities to expand via acquisitions. Overall, Concho has identified about 18,000 future drilling locations on its land, which it estimates can recover as much as 5 billion BOE of resources. While Concho doesn't have quite as ambitious a growth forecast as Pioneer, the company still anticipates that it can deliver 20% oil growth through 2019 at current crude prices.

One thing all five of these oil companies have in common is that each controls a prime acreage position in the oil-rich Permian Basin. Because of that, these companies can drill wells that earn fantastic returns at $50 oil, which will provide them with the cash flow to fuel remarkable production growth rates even if crude barely budges. This high-margin growth has the potential to create tremendous value for investors as these oil companies put the recent market downturn in the rearview mirror.