Chime comes in three versions -- Chime Basis, for 1:1 voice and video calls and chat; Chime Plus, which adds screen sharing and the integration of company directories; and Chime Pro, which adds tools for scheduling, hosting, recording, and personalizing meetings for up to 100 people. 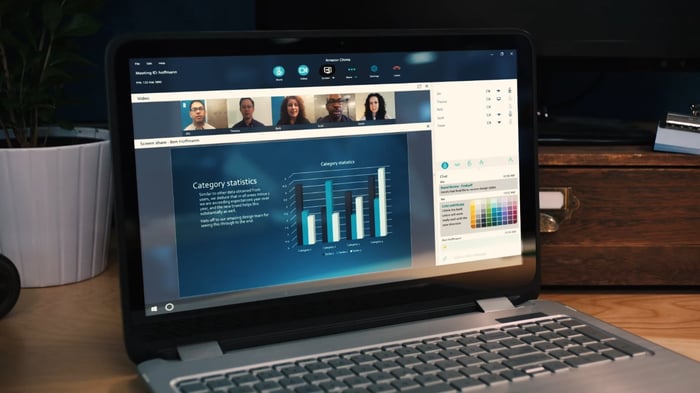 These features indicate that Amazon is taking aim at collaborative tools like Microsoft's (NASDAQ:MSFT) Skype and Cisco's (NASDAQ:CSCO) Spark. But are those rivals already too deeply entrenched in the enterprise market for Amazon to disrupt? Let's take a closer look at Amazon's game plan to find out.

Amazon's AWS, which has an annual run rate of $14 billion, is the biggest cloud infrastructure platform in the world. It's several times larger than its closest competitor, Microsoft's Azure. But while AWS dominates the cloud platform (infrastructure/platform as a service) market -- which hosts storage space, processing power, and other tools for companies and developers -- it doesn't have a major presence in the SaaS (software as a service) market yet.

The SaaS market is the crowded, consumer-facing side of the cloud, which includes services like Microsoft's Office 365, Dynamics CRM, and Skype. The lion's share of Microsoft's commercialized cloud revenue run rate of $14 billion is generated by those SaaS products instead of Azure. Microsoft has also been expanding Skype's capabilities as an enterprise collaboration tool with Microsoft Teams, which enhances Skype's cloud-based communication features and tightly integrates the service into Office 365. 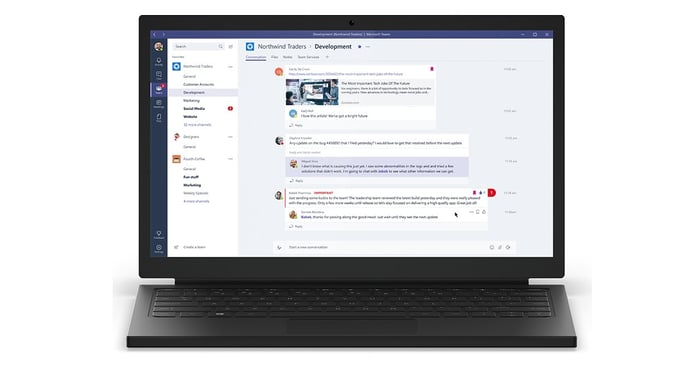 Meanwhile, networking giant Cisco aggressively bundles software and security products with its routers, switches, and unified computing systems. Those bundles include collaboration tools like Spark, the cloud-based platform for messages, meetings, and calls it launched in late 2015. Last quarter, Cisco's collaboration revenues rose 4% annually to $1.06 billion -- making it its third largest business after its core businesses of router and switches.

But Microsoft and Cisco aren't the only players in the crowded field of cloud-based collaborative tools. Alphabet's Google has been promoting Hangouts to enterprise customers over the past year, Box has added collaborative tools on top of its cloud storage platform, and LogMeIn acquired Citrix's GoToMeeting video conferencing platform for the same purposes. However, all these challengers notably lack Microsoft and Cisco's clout in the enterprise market.

That's why Amazon believes it can succeed

But like Microsoft and Cisco, Amazon also has leverage -- the growing importance of AWS to enterprise customers. Amazon likely believes that by offering Chime as an extension of AWS (especially with its 30-day free trial) to its enterprise customer base, it can gain a foothold in the crowded "unified communication" platform market.

Amazon previously launched enterprise SaaS products like WorkSpaces, WorkDocs, and WorkMail, but it hasn't ever released official growth figures for those products. However, most industry watchers believe that those products are still dwarfed by comparable solutions from Microsoft and Cisco. This strongly indicates that AWS' dominance of the PaaS/IaaS markets doesn't guarantee that Chime will become a Skype or Spark killer anytime soon. Chime Pro also costs more than Skype for Business -- so it doesn't look like Amazon plans to undercut its way into the market.

Chime sounds like a logical way for AWS to straddle the PaaS/IaaS and SaaS markets, but it's easier said than done. The market for cloud-based unified communication platforms is incredibly crowded, and it's doubtful that a new service -- even one bundled with AWS -- can claim a meaningful slice of the market. However, Amazon investors should still keep an eye out for future SaaS products to see if the company can eventually challenge heavyweights like Microsoft and Cisco.