General Motors (NYSE:GM) threw the media a bone this week as we all got to imagine the potential outcomes from the Detroit automaker's discussions with PSA Group to sell its unprofitable European operations. The overwhelming talk is in regard to GM making a clean exit by simply selling its Opel/Vauxhall operations, and how some extra cash on hand could open the door for GM to purchase Fiat Chrysler Automobiles (NYSE:FCAU), just as the latter pushed for only a couple of years ago. Possible, right?

Highly doubtful, in my opinion, for a few reasons.

Playing devil's advocate for a second here, it's entertaining to think of General Motors having control of FCA's Jeep and Maserati brands. That's because Jeep had mostly been a North American player, and a leading SUV brand, until recently when FCA stretched its Jeep brand overseas. GM, which sells more vehicles in China than in the U.S. and sells more vehicles around the world than FCA does, could more effectively expand Jeep globally. 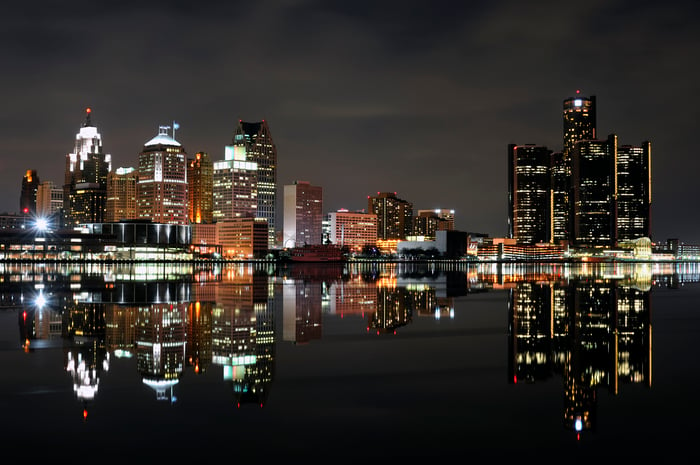 It's also entertaining to imagine General Motors in control of a powerhouse European luxury brand such as Maserati. Though both have made strides recently, a struggling Cadillac and Lincoln luxury lineup has always been a knock against Detroit's two largest automakers, something they have been able to offset by dominating a lucrative full-size truck market in the U.S. But if GM had the best of both worlds, full-size trucks and a legitimate European luxury brand? That's tantalizing for investors.

It's even intriguing to wonder what margin improvement and cost synergies could be created by GM buying FCA, as the former has proven it has the ability to cut costs. GM is already shifting from 14 core and 12 regional vehicle architectures in 2015 to a much more efficient and flexible four-global-vehicle set by 2025. Furthermore, GM is on target to generate $6.5 billion in cost efficiencies by the end of 2018 through materials cost reduction, logistics optimization, manufacturing, and SG&A improvement -- all changes FCA's operations could benefit from in its current state.

But let's be realistic

There's simply no way General Motors is going to buy FCA. Among many reasons, there's too much dead weight with FCA's Dodge and Chrysler brands and too much debt to make it even a little enticing.

While FCA does indeed have some attractive assets in Ram Truck, Jeep, and Maserati, reviving Alfa Romeo, Dodge, and Chrysler while paying down debt and focusing on the future of autonomous vehicles and smart mobility projects under its own Maven brand would be too much on GM's plate. Also, as talks between GM and PSA Group have evolved, the rumored valuation for GM's Opel unit is about $2 billion, which is a nice chunk of cash to have but not nearly enough to persuade GM to purchase FCA -- remember, GM wants to keep its cash and cash equivalents around $20 billion.

It seems far better for investors that GM stay clear of purchasing FCA, as it has long said it would, and instead focus on its goals: exiting its long-unprofitable Europe operations, turning Maven into a real pillar of revenue, accelerating sales of Cadillac, and developing autonomous vehicles for its Lyft ride-hailing investment.