Although the Federal Reserve has started to tighten interest rates, it's still hard to find investments providing a notable yield. But it isn't impossible if you look in the right places and are willing to take on a little extra risk. Royal Dutch Shell Plc (NYSE:RDS.B) and Buckeye Partners, L.P. (NYSE:BPL), with their 6.5%-plus yields, are perfect examples. Here's why you might want to take a look at these energy industry players that pay you to own them.

Royal Dutch Shell, one of the world's largest integrated energy companies, made a $50 million bet while falling oil prices were crimping its top and bottom lines. It basically doubled down on liquefied natural gas via the purchase of BG Group. Strategically, this should position the company well in a fuel that's widely expected to be the bridge between the carbon-focused world we live in today and a more environmentally friendly one fueled by renewable power. 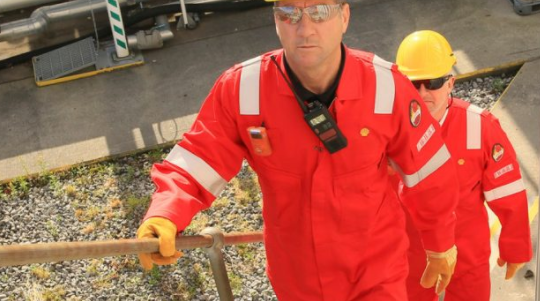 The problem is that the $50 billion price tag left Shell with a lot of debt right when investors were most concerned about its ability to pay its dividend and invest for the future. Debt was roughly $83 billion at the end of 2016, around 30% of the capital structure. That represents a huge 50% year-over-year increase. Shell's debt is one of the key reasons it yields nearly 6.8% today.

This fact isn't lost on Shell. In fact, it's now starting the process of selling non-core assets to pay down its debt. And every sale makes the dividend more secure. The sales will also further fine-tune the company's portfolio as it shifts toward natural gas, an area in which it is already one of the biggest global players. 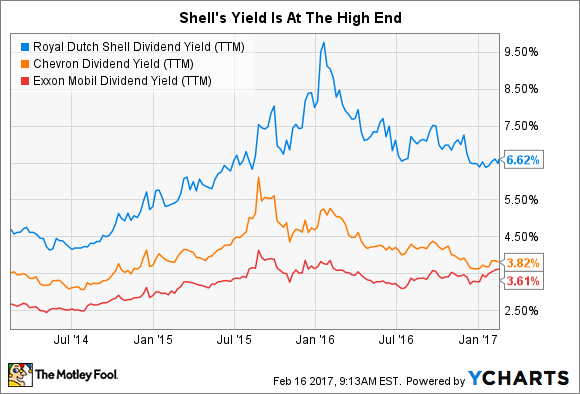 With competitors like Chevron sporting yields of around 3.9%, Shell's high yield might be worth the extra leverage risk...especially since management has already started to work on improving the balance sheet. It may take some time to get debt back to where it was before the BG deal, but you are being paid very well to wait.

Buckeye Partners' 7% distribution yield is a pretty good reason to put it on your income investing short list -- and why you might want to give it a higher slot than competitors like midstream oil and gas giant Kinder Morgan (NYSE:KMI), which yields a paltry 2.3% or so. Sure, Buckeye is a relative small fry at a $9 billion market cap (Kinder Morgan's market cap is over five times that figure), but it's been in the midstream business in some form for 130 years. Buckeye is no fly-by-night start-up.

There's more to like, here, though. Specifically, Buckeye has increased its distribution year-in and year-out for 21 consecutive years. That's even longer than Enterprise Products Partners, which is generally looked at as one of the best-run midstream companies around. Enterprise, for reference, yields around 5.8%, has increased its payout for 20 years running, and might be worth a look, too. But if you mix yield and distribution growth longevity, Buckeye wins. 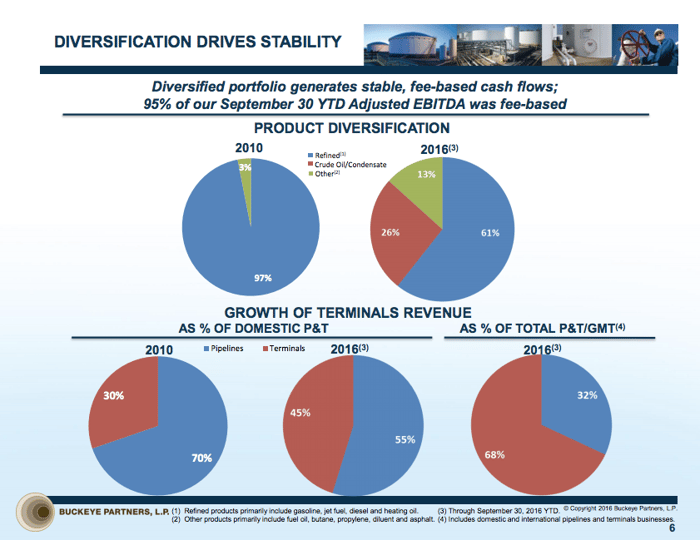 Since 2010, Buckeye has been tweaking its portfolio, spending more than $8 billion on acquisitions and internal growth products. The big goal was to diversify its business, and it has made notable progress. For example, domestic operations at this storage-focused midstream player made up over 75% of EBITDA five years ago. Buckeye has brought that figure down to around 55% while nearly doubling the size of its global business.

Buckeye was able to get through all of that change without disrupting its impressive annual distribution growth streak. Buckeye may be small, but it pays you well to own it and gives you regular pay hikes, too!

A little more for a lot more

There's no question that there are safer investment options than relatively debt-heavy Royal Dutch Shell and small-fry Buckeye Partners. However, if you're willing to take on a little more risk, this duo could easily find their way into your income portfolio, paying you very handsomely to stick around.

And the added risk -- well, it may not be as bad as it looks. Shell, for example, is on the way to fixing its balance sheet. And Buckeye, despite its modest size, stands up well against giant peers like Enterprise and Kinder, the later of which actually had to cut its dividend not too long ago.