Shares of retailer Target (NYSE:TGT) slumped on Tuesday after the company reported disappointing fourth-quarter results and guided for a substantial profit decline in 2017. Target pointed to rapidly changing consumer behavior as the main driver of its poor performance. At 11:20 a.m. EST, the stock was down about 11.5%. 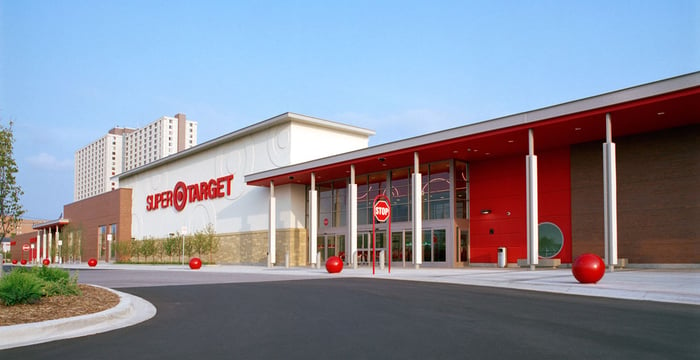 Non-GAAP earnings per share came in at $1.45, down from $1.52 in the prior-year period and $0.06 lower than analysts were expecting. Gross margin declined by 1 percentage point year over year to 26.9%, with the company blaming markdown pressure, promotional activity, and the shift toward digital sales.

While its fourth-quarter results fell short of expectations, it was the company's guidance for 2017 that likely triggered the sell-off. Target expects a low-single-digit decline in comparable sales and non-GAAP EPS between $3.80 and $4.20 for the year. That's as much as a 24% drop from non-GAAP EPS of $5.01 in 2016.

We will accelerate our investments in a smart network of physical and digital assets as well as our exclusive and differentiated assortment, including the launch of more than 12 new brands, representing more than $10 billion of our sales, over the next two years. In addition, we will invest in lower gross margins to ensure we are clearly and competitively priced every day. While the transition to this new model will present headwinds to our sales and profit performance in the short term, we are confident that these changes will best-position Target for continued success over the long term.

With Wal-Mart recently adopting free two-day shipping for online orders and reportedly lowering grocery prices and demanding cost reductions from suppliers, Target is feeling the heat. With slumping in-store sales and the promise of lower gross margins in the future, investors are finding little reason to stick with the stock.