Despite a slightly higher market, these stocks fell. Find out why.

The stock market eased higher on Friday, again bouncing back from gains earlier in the trading session. A speech by Federal Reserve Chair Janet Yellen confirmed what many market participants had already expected: The central bank is likely to move forward with an interest-rate increase when its monetary policy committee meets later in March.

Rather than panicking, investors seemed to take the stance as a positive sign that the U.S. economy is ready for at least slightly less accommodative monetary policy going forward. Yet some stocks suffered sharp declines, and Shake Shack (SHAK 3.61%), Fred's (FRED), and Seadrill (SDRL) were among the worst performers on the day. Below, we'll look more closely at these stocks to tell you why they did so poorly.

Shake Shack dropped 6% on Friday, adding to its losses on Thursday following its fourth-quarter financial report earlier in the week. The burger chain said that fourth-quarter sales were up 44%, continuing an impressive streak of growth for the company.

However, same-restaurant sales were up just 1.6%, and adjusted net income was up at a much slower growth rate of 12%. Looking forward, Shake Shack CEO Randy Garutti was excited about the company's prospects, pointing to continued restaurant expansion and efforts in its mobile strategy.

Yet predictions for same-restaurant sales growth of just 2% to 3% going forward didn't exactly live up to growth investors' expectations. Some shareholders appear fearful that diminishing returns from newly opened restaurants could weigh on Shake Shack's overall growth rate in the future. 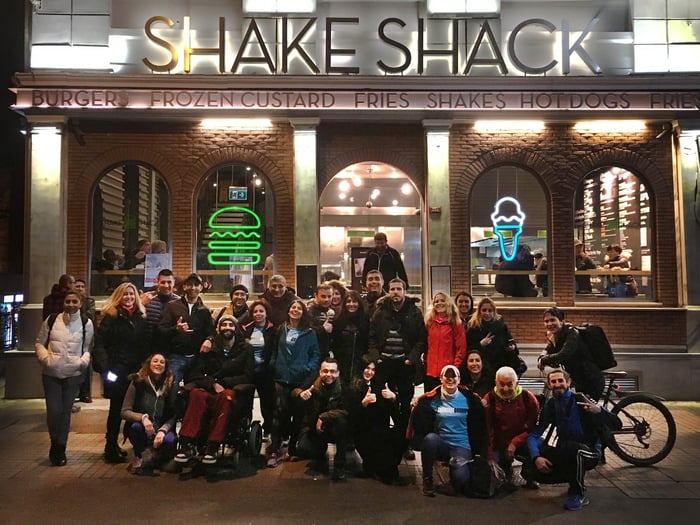 Fred's fell 11% after the drugstore chain reported its February sales figures. The company said that total sales were down 3.5% from last February, and total comparable-store sales were down a sharper 4% from the year-ago period. CEO Michael Bloom blamed a delay in tax refunds for some of the weakness, suggesting that March could be stronger than it has been historically once those refund payments start coming in.

In addition, Fred's signaled that it's happy with its healthcare strategy as it saw good same-store sales in the pharmacy business. A lot depends on whether Fred's ends up being the big beneficiary of the merger between Walgreens Boots Alliance and Rite Aid, which, if approved, would lead to Fred's having the opportunity to more than double in size through divestitures of Walgreens and Rite Aid stores. For now, though, investors can only hope for ongoing progress in March and beyond.

Finally, Seadrill plunged another 25%, with most of the losses coming late in the afternoon. Investors appeared unwilling to hold onto shares going into the weekend, especially after comments earlier in the week that suggested that the drilling company might have to consider less encouraging options if it couldn't successfully renegotiate terms of its outstanding debt with creditors.

Seadrill has a substantial amount of debt coming due in April, and its lenders have apparently been slow in reaching agreement on how to proceed. Seadrill said that it was exploring other alternatives, which might include a Chapter 11 bankruptcy filing, in the event that negotiations fail. Regardless of whether the company reaches an agreement, the odds of shareholders escaping negotiations without at least substantial equity dilution appear to be worsening as time passes.