Please ensure Javascript is enabled for purposes of website accessibility
Log In Help Join The Motley Fool
Free Article Join Over 1 Million Premium Members And Get More In-Depth Stock Guidance and Research
By Jeremy Bowman - Mar 4, 2017 at 8:03AM

Troubles continued for the struggling retailer in its recent earnings report.

Shares of the Container Store Group Inc (TCS 5.54%) were getting bottled up again last month as the organization-themed retailer disappointed in yet another quarterly earnings report. Shares dropped sharply over a two-day period, but recovered some of those losses in the following days: 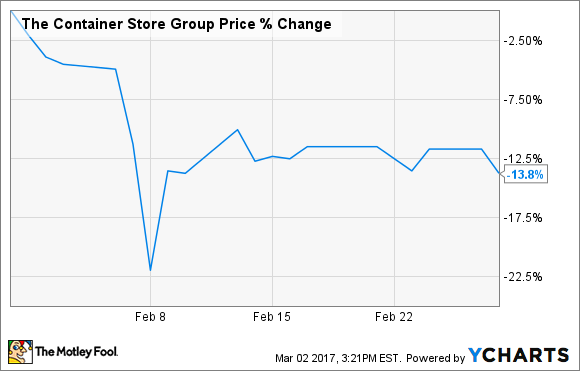 Container Store stock has been hammered repeatedly since the company's initial public offering, as growth has been sluggish and profits almost nonexistent. That pattern continued last month in its third-quarter earnings report, as comparable sales fell 3.9% in the period, worse than the expectations of 2.5%, while overall revenue improved just 1.7% to $216.4 million, shy of the consensus at $217.7 million.

Bottom-line results were more promising as earnings per share improved from $0.08 to $0.11, matching estimates. CEO Melissa Reiff credited "ongoing discipline on the expense side" for the improvement in earnings, and said sales of custom closets were strong but were counteracted by weak holiday-department sales.

Reiff said the company was working on a strategic plan to deliver long-term growth, which will be presented by June, but many of the company's problems seem to be secular and therefore beyond any attempt by management to overcome them.

Retailers across the board are struggling with the shift to e-commerce, and big-box stores like Container Store are reliant on customer traffic. Despite a strong housing market, the company has been unable to deliver consistent comparable sales growth. The company now expects same-store sales to fall close to 3%, and for full fiscal-year EPS to come in toward the bottom of its previously stated range of $0.20 to $0.30.

I'd expect the stock to remain mired in the doldrums.