Please ensure Javascript is enabled for purposes of website accessibility
Log In Help Join The Motley Fool
Free Article Join Over 1 Million Premium Members And Get More In-Depth Stock Guidance and Research
By Reuben Gregg Brewer - Mar 9, 2017 at 11:04AM

Silver and gold streaming company Silver Wheaton is well positioned, but there are still a few hurdles to overcome.

Silver Wheaton Corp. (WPM -5.53%) is benefiting from rising gold and silver prices. However, that makes life for this precious metals streaming company more difficult in other ways. And then there's the company's tax dispute with the Canadian government clouding the financial outlook. Investors should be pleased that Silver Wheaton's top and bottom lines are going up today, but that doesn't mean all is perfect in the world. Here's what you need to know about three of the company's biggest challenges.

It might seem odd to list rising precious metals prices as a risk, because it happens to be a huge benefit. For example, rising gold and silver prices helped push revenues over 50% higher year over year in the third quarter of 2016. Earnings increased more than 180%. How is that bad? 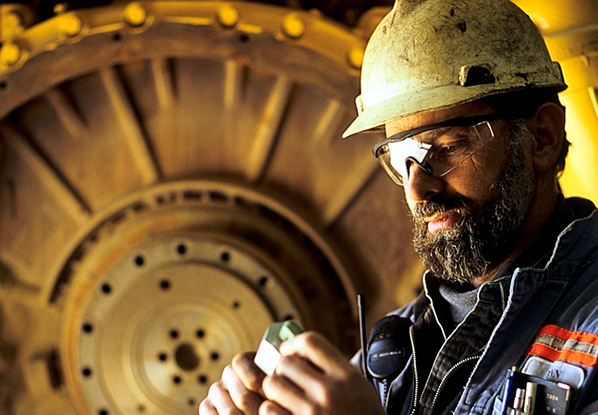 You have to think about the business model. Silver Wheaton gives miners up-front payments for the right to buy gold and silver at reduced rates in the future. But miners' results are improving, too. Precious metals giant Barrick Gold (GOLD -3.54%), for example, saw earnings jump to $0.53 a share in 2016 from a loss of $2.44 a share in 2015. Equally important, it's stock price is up more than 140% from the lows reached in the third quarter of 2015.

Improving earnings and a higher stock price increase the financing options for miners that might otherwise go to Silver Wheaton for cash. Barrick, for example, tapped Silver Wheaton competitor Royal Gold (RGLD -2.31%) for $610 million in 2015 when it was struggling. Silver Wheaton, meanwhile, inked deals with then-suffering giants Glencore and Vale SA (VALE -2.54%) worth a total of $1.8 billion in 2015. Those two deals helped push Silver Wheaton's silver production up 11% year over year in the third quarter of 2016 and rocketed gold production higher by over 85%.

Silver Wheaton didn't sign any big deals in 2016, meaning growth is going to slow down from 2016's heady rate. In fact, its only major move last year was a $500 million development investment (spread over a number of years) with Panoro Minerals. That's a company you may never have heard of for a mine that is likely years away from operation. Which brings us to point No. 2.

With the big miners regaining access to other funding sources, like the bond and equity markets, Silver Wheaton has to look elsewhere for deals. And that generally means working with projects that are in the development stage and inking agreements with smaller miners -- or both at the same time. The Panoro deal is an example of this shift. 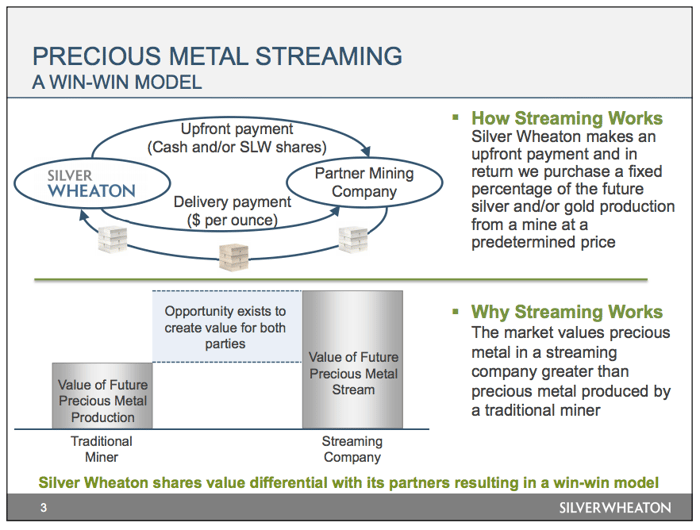 That's not necessarily bad, but development projects are inherently uncertain. The expected precious metals may not actually be there in the quantity or quality expected, legal and regulatory issues could complicate mine development, and building a mine is an expensive and time-consuming process with no rewards until it's up and running. And Silver Wheaton, as a financial partner, has little to no control over what happens.

So, as Silver Wheaton is increasingly reliant on development projects for growth, its risks go up.

The first two risks are just a part of Silver Wheaton's business model. Risk three, though, isn't. The streaming company is currently in a dispute with the Canadian government over how it calculates its taxes. Not surprisingly Canada says Silver Wheaton owes more money, and Silver Wheaton says it doesn't.

There are actually two big risks here. The first is that the years from 2005 on are in play, which could lead to a material one-time charge for back taxes, interest, and fines if Silver Wheaton losses this case. When I last did a back-of-the-envelope calculation on this, I came up with a figure approaching $500 million. And every day, it gets bigger. To put that into perspective, through the first nine months of 2016, Silver Wheaton had revenues of around $640 million. So this would be a big one-time hit. 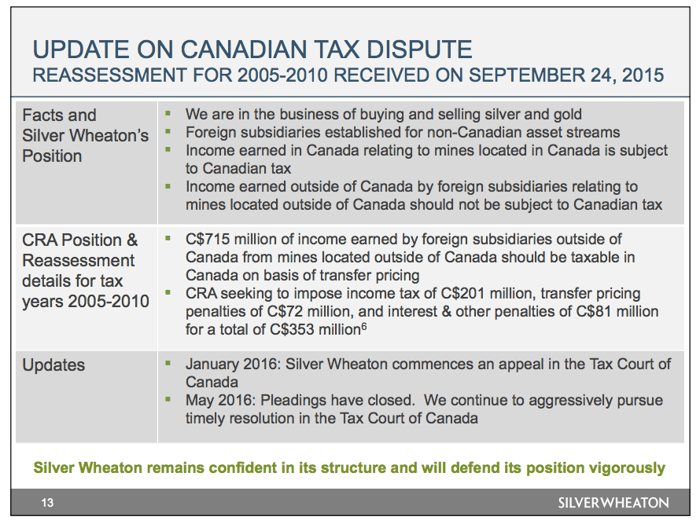 This is the backdrop for the first of two tax cases, covering 2005 to 2010. Image source: Silver Wheaton.

But it gets worse because a change in the taxes Silver Wheaton pays will likely reduce its earnings on an ongoing basis. So, Silver Wheaton could become a less profitable company if it loses. This is one risk worth watching very closely, even though Silver Wheaton is confident it will prevail in the end.

Silver Wheaton is in good shape today, so there's no particular reason to worry. However, that doesn't mean there aren't risks. Rising precious metals prices come with the risk of reduced investment activity. That, in turn, could mean slower growth. It will also push Silver Wheaton toward development projects, which are inherently risky. And then there's the tax dispute with Canada. That's a real wild card, since a loss there would mean a big upfront cost and higher ongoing taxes. If you're watching Silver Wheaton, these are risks you should have on your radar.