More cars on boats is partially why the number went up.

The breakdown of inventory isn't disclosed until the subsequent 10-Q or 10-K is filed after earnings, and Tesla filed its 10-K earlier this month. Investors can now see the moving parts.

Tesla is now sitting on $1 billion in finished goods

For starters, here's a breakdown of Tesla's inventory for the past two quarters.

It's worth pointing out real quick that the SolarCity acquisition closed during the quarter, combining both companies' balance sheets. SolarCity had about $172.7 million worth of total inventory (consisting primarily of $141 million in raw materials and $31.8 million in work in progress) at the end of the year, which accounts for a portion of the sequential increase.

Since SolarCity does not have a finished goods category for its inventory, we can safely say that the notable increase of about $225 million in finished goods is coming from the automotive side. This is the first time that Tesla's finished goods inventory has surpassed $1 billion. 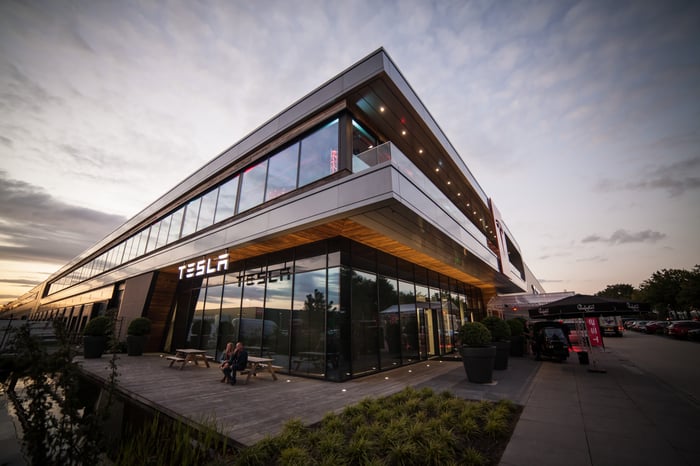 Investors do know that Tesla has been growing its international sales -- total revenue outside the United States grew 34% to $2.8 billion in 2016 -- and those orders take longer to get to their new homes abroad. Reflecting this, vehicles in transit at the end of each quarter rose throughout 2016.

Part of the increase for the fourth quarter was the nearly 1,000 additional vehicles that were probably sitting on a boat in the middle of the ocean, relative to the third quarter. Tesla doesn't disclose average transaction prices, but most third-party estimates peg the average at right around $100,000, which would suggest that approximately $100 million of the increase can be tied to the increase in in-transit vehicles.

The rest of the increase can probably be explained by a modest increase in stores and service locations (14 new locations opened during the quarter) and associated inventory models and loaners, as well as higher inventories of pre-owned vehicles (pre-owned vehicle sales are driving the growth in service and other revenue). Considering Tesla's integrated model and growth, a ballooning inventory balance is just par for the course.