Albemarle Corporation (ALB -1.51%), the world's largest supplier of lithium, reported fourth-quarter and full-year earnings and 2017 guidance on Feb. 28 that delighted the market, which sent shares soaring nearly 10% the day earnings were released.

The Charlotte, North Carolina-based specialty chemical company's quarterly revenue dipped 3.6% year over year to $696.7 million -- meeting analysts' estimates -- while adjusted earnings per share (EPS) declined 19% to $0.78, beating Wall Street's consensus of $0.73. EPS based on generally accepted accounting principles (GAAP), which got a boost from the sale of the Chemetall business, came in at $5.30, versus $1.55 in the prior-year period. The revenue decline was driven by the company's divestitures totaling $70.9 million, partially offset by higher sales volumes, higher prices, and more favorable product mixes in certain businesses, as well as favorable currency exchange impacts. 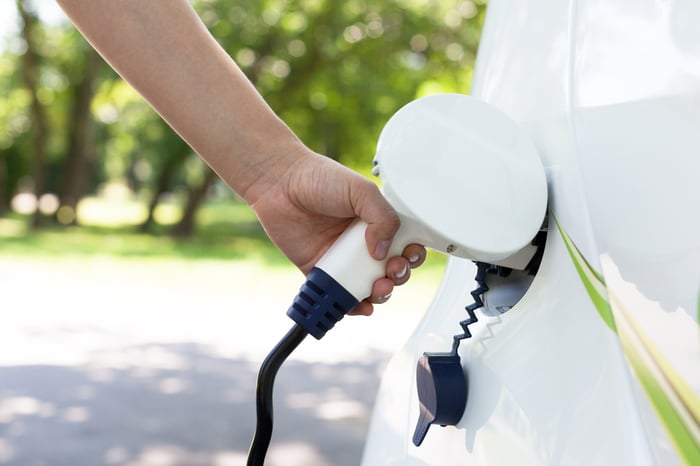 Albemarle's stock has returned more than 79% over the one-year period through Tuesday, crushing the S&P 500's nearly 21% return. The stock has been fueled by strength in the company's lithium business, as demand for lithium has considerably risen, along with its price, since early 2016. The primary driver is increasing demand for rechargeable lithium-ion batteries for electric vehicles and for other energy storage uses. 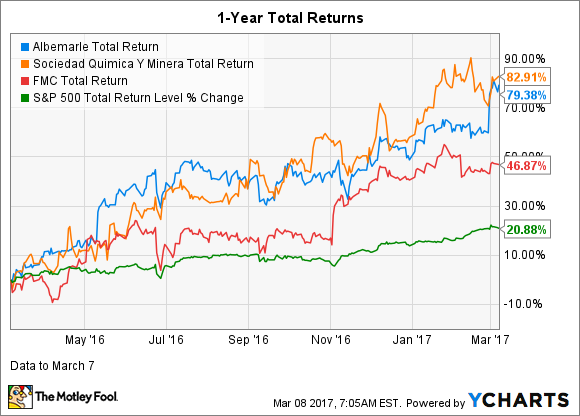 The stocks of the three largest lithium suppliers that are listed on a major U.S. stock exchange have been on a tear since 2016. Data by YCharts.

Data source: Albemarle. *Segment revenue and adjusted EBITDA do not add up to the company's totals because there is a tiny "other" category and a considerable corporate category. Total adjusted EBITDA rose 7.4% year over year to $187.4 million; excluding divestitures, adjusted EDITDA increased 12%. YOY = year over year.

Drilling further down into this segment by product line shows how powerfully lithium continues to perform:

Bromine specialties' sales and EBITDA primarily benefited from higher sales volumes, but also got a boost from currency exchange.

CEO Luke Kissam summarized in the press release the company's main financial accomplishments in 2016: "Our three reportable segments again delivered strong results in the fourth quarter capping a year in which our three [general business units] delivered adjusted EBITDA growth of $96 million, an increase of 13% compared to 2015. Full year adjusted EBITDA growth of 34% in Lithium and 21% in Refining Solutions was especially impressive."

Kissam also commented on key strategic initiatives Albemarle completed in the quarter in order to accelerate its transformation into a premier, high-growth specialty chemicals company:

The sale of the Chemetall Surface Treatment business to BASF SE was completed, fully restoring our balance sheet, and substantially increasing our financial flexibility. We finalized the agreement with CORFO [the government body that administers leases on Chile's lithium salars, or salt flats. ] that more than triples our Lithium quota in Chile, and secures our access to the best lithium reserve in the world through 2043. Finally, we closed on the acquisition of the lithium assets of Jiangxi Jiangli New Materials Science and Technology Co. Ltd., which makes us an owner of high quality spodumene [a lithium-bearing mineral in hard rock] conversion assets and makes us an integrated producer of lithium salts from spodumene given our ownership position in the Talison mines in Australia.

For context, for the full-year 2016, Albemarle's year-over-year revenue declined 5.3% and adjusted EPS edged up 1.4%. And going into the earnings release, analysts were projecting the company would post adjusted EPS of $4.07 on revenue of $2.78 billion in 2017. With the company's outlook rosier than Wall Street expected, the majority of analysts revised their numbers upward.

Based on Albemarle's sunny 2017 outlook, its actions in 2016 -- including divesting of certain lower-growth businesses and strengthening its lithium position -- appear to have set it up for solid financial performance in 2017.