Uranium miners are in a tough spot. The near-term forecast for the industry is stormy at best. But the long-term outlook appears particularly bright. Still, current trends are punishing well-positioned uranium miner Cameco Corp. (NYSE:CCJ), which is probably the best uranium stock to buy today. But it's also making life hard for companies like Denison Mines Corp. (NYSEMKT:DNN) and NexGen Energy Ltd. (NASDAQ: NXGEF) that are building from the ground up to serve the growing demand the entire industry expects to see in the future. Despite the headwinds, all three are worth a close look for investors seeking exposure to the uranium and nuclear-power industries in their portfolios..

Cameco is the largest publicly traded uranium miner in the world, selling 31.5 million pounds of the nuclear fuel last year. That said, CEO Tim Gitzel noted that 2016 saw uranium prices reach 12-year lows. The company lost money, too, though that was the result of a one-time impairment charge. This is the key here, because if you pull the roughly $360 million charge out, Cameco was profitable. Up until 2016, meanwhile, the miner was profitable every year through the current uranium downturn. 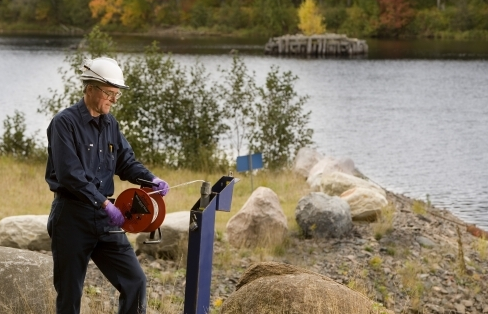 But that deserves a little more examination. Cameco's business is built on long-term contracts. That allowed it to realize prices that were 60% higher than the average spot price last year. Here's the interesting thing: Its contracts should protect it from weak prices out to around 2021. By that point, new construction of nuclear power plants should push demand beyond supply and, with any luck, lead to higher uranium prices.

Cameco is big, well run, and looks like it will easily survive today's market because of its contract-focused business. And when uranium prices pick up again, it will be ready to take advantage of the industry turn. Most of the other companies selling uranium today don't have the same scale and have been bleeding red ink for years, like Energy Fuels Inc. (NYSEMKT:UUUU). If you want a uranium miner that's up and running, Cameco is the best bet.

However, the real story for uranium isn't the tough market that Cameco is deftly navigating. It's the future opportunity that 58 nuclear power plants currently under construction (and the outlook for more because of increasing electricity demand globally) paint for the future. In fact, NexGen Energy sees the supply/demand equation starting to tighten materially in the next few years, which should lead to higher uranium prices and an uptick in contracting activity. 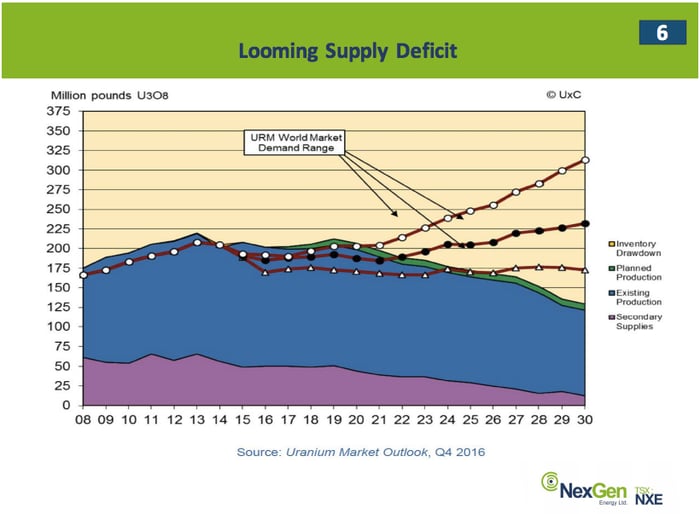 Supply and demand get tight in the next few years.  Image source: NexGen Energy.

This is where Denison and NexGen come into play. Both of these miners are in the process of building mines to meet future demand -- they aren't material producers of uranium today. Assuming that the story plays out as expected, they'll be able to sell their uranium into the next commodity upturn when their mines come on line. But it's important to openly discuss what's going on here for investors. Buying either of these companies is a bet that a money-losing penny stock will pay off with huge rewards.

Denison and NexGen, then, are kind of options on the future of uranium demand. Based on the current low price for uranium, they look like an interesting way to gain exposure to the industry, but they are not appropriate for conservative investors.

Denison has a 22.5% interest in a uranium processing facility that serves one of Cameco's newest and lowest cost mines. Although its exploration efforts cost well more than it's bringing in from that investment, at least it has some revenue from a reliable business to support its spending. NexGen is just spending money on exploring its uranium assets, which notably include one of the largest uranium deposits in politically stable Canada. Both, however, are basically funding growth by selling equity and debt.

That's fine, but every time they tap the capital markets, the eventual payoff for current investors gets a little smaller. If you decide to step in here, you'll want to pay close attention to the progress of their exploration and mine development efforts. And don't expect a big payday around the corner -- mines take a long time to get up and running.

I'm a bird-in-the-hand type of guy, so Cameco is my favorite uranium option despite the difficult market today. However, I can't help but find NexGen and Denison interesting because of the optionality of the investments. For an investor who just wants to put a little money at risk, they could end up offering a better risk/reward trade-off. All three, however, should be on top of your list if you are looking at uranium today.

The Best Uranium Stocks to Buy in 2017, and 2 More to Keep in Mind @themotleyfool #stocks $CCJ $DNN $UUUU Next Article
Current