The home-furnishings specialist is boosting its payout despite continued industry headwinds.

Williams-Sonoma (WSM 0.45%) announced better-than-expected fiscal fourth-quarter 2016 results Wednesday after the market closed. But that doesn't mean the Pottery Barn parent was without its challenges over the key holiday period. Let's take a closer look at how Williams-Sonoma capped the year, as well as what investors can expect from the company going forward. 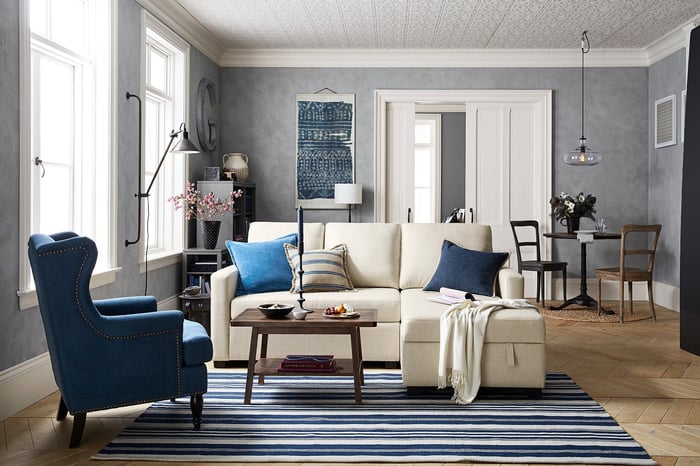 Williams-Sonoma CEO Laura Alber noted that the company "executed one of [its] best holiday seasons and delivered an improved customer experience" during the quarter. She elaborated on the road ahead:

Entering 2017, we will continue to improve performance and increase our competitive advantage, with a focus on innovation in e-commerce, our products and service, and the retail experience. We will also remain relentlessly focused on operational excellence throughout our supply chain, driving strategies that will improve our customers' experience across all of our brands. We are optimistic about the future and believe we have the infrastructure, strategies, and talent in place to drive long-term profitable growth for our shareholders.

For the current fiscal first quarter, Williams-Sonoma expects revenue to be in the range of $1.085 billion to $1.120 billion, assuming a change in comparable-brand revenue of negative-1% to positive-2%. On the bottom line, that should translate to diluted earnings per share of $0.45 to $0.50.

Finally, for the full fiscal year 2017, Williams-Sonoma expects revenue of $5.165 billion to $5.265 billion, up from $5.084 billion in fiscal 2016, and assuming comparable-brand revenue growth of 1% to 3%. That should result in full-year diluted earnings per share of $3.45 to $3.65, compared with $3.41 in fiscal 2016. For perspective -- and though we don't typically pay close attention to Wall Street's demands -- analysts' consensus estimates predicted revenue and earnings near the high ends of Williams-Sonoma's respective guidance ranges.

Similar to its past few quarters, that doesn't rule out the possibility that Williams-Sonoma is offering a tempered outlook given today's notoriously difficult retail environment -- something to which investors have grown accustomed. So given its relative outperformance in the lucrative holiday season, and with shares down nearly 20% over the past year, it's no surprise that the stock was moving higher in initial after-hours trading following the report.

1 Ultra-Cheap Dividend Stock to Kick Off 2023

Buy This Dirt-Cheap Dividend Growth Machine and Thank Yourself Later