After spending billions of dollars to expand its midstream business over the past few years, Phillips 66 (NYSE:PSX) released a capital budget that was on the lighter side this year. That was partly due to the upcoming completion of a big part of its major projects, but it also reflected the fact that the company didn't have as many compelling growth options as it had in the past. That said, the company appears poised to add a new expansion project to its backlog after launching an open season to build the Rodeo Pipeline in a scorching-hot portion of the Permian Basin.

As the slide below shows, Phillips 66 started to ramp up its investment spending in 2014: 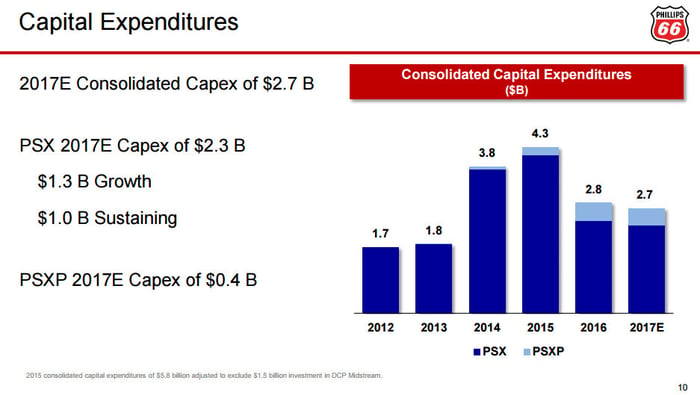 One of the drivers of that spending increase was the decision to invest $3 billion in building two major midstream projects: Sweeny Fractionator One and Freeport Liquefied Petroleum Gas Export Terminal. In addition to that, the company also became a 25% partner with Energy Transfer Partners (NYSE: ETP) and Sunoco Logistics Partners (NYSE: SXL) on their Dakota Access Pipeline and the Energy Transfer Crude Pipeline projects, which cost $4.8 billion.

That said, the company has since completed all those projects. Sweeney Fractionator One, for example, entered service in late 2015. Meanwhile, the company finished up the Freeport LPG Export Terminal late last year, and oil is expected to start flowing through the Dakota Access Pipeline this week. Because Phillips 66 has now completed most of its major capital projects, its capital budget for 2017 will be the smallest in years. Though, CEO Greg Garland also noted in the press release announcing the company's 2017 budget that "returns on our investments are important, and the reduction in capital spending from prior years reflects that fewer projects meet our return thresholds in the current business environment." 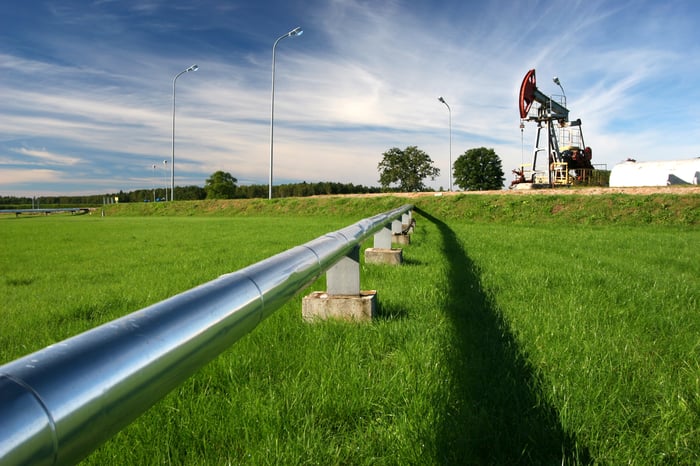 Opening up a new option

However, the company appears to have found a new project that just might meet its return threshold: the Rodeo Project. That proposed oil pipeline would ship crude from the red-hot Delaware Basin to storage terminals near Wink, Midland, and Odessa, Texas, with the latter terminal to be constructed by the company's master limited partnership, Phillips 66 Partners (NYSE:PSXP). Phillips 66 envisions a 130,000-barrel-per-day pipeline that would enter service in the second half of next year, with the potential to expand its capacity up to 450,000 barrels per day in the future. That said, the company does need to secure enough shippers for the project to justify the investment. However, given how quickly producers are ramping up production in that basin, it shouldn't have any problems in that regard.

The pipeline would focus on production coming from Reeves, Loving, and Winkler counties in Texas. That's a region where drillers have spent billions of dollars over the past couple of years to lock up acreage. For example, WPX Energy (NYSE:WPX) paid $2.75 billion in 2015 to acquire property in the region, the bulk of which is in Loving County. Meanwhile, earlier this year WPX Energy followed that up with a $775 million transaction to add acreage in both Reeves and Loving counties. As a result of these deals, WPX Energy has the capability to grow its oil output by 30% this year, with plans for 55% oil growth next year and 30% to 40% compound annual growth through 2020.

Meanwhile, RSP Permian (NYSE: RSPP) spent $2.4 billion to buy drillable land in Loving and Winkler counties last year. That deal will help fuel remarkable production growth for RSP Permian over the next few years, with the company expecting its output to surge 82% to 95% this year, and grow by over 30% in 2018 and 2019 at $55 oil. Overall, RSP Permian picked up more than 3,000 future drilling locations in the region, which gives it years of production growth potential.

Given how much oil output is expected to grow in this area, it appears that Phillips 66 shouldn't have any problem finding takers for the capacity of the Rodeo Pipeline. In fact, this project could prove to be a springboard to more projects in the future, including additional pipeline-capacity expansions, more terminal additions, and other infrastructure projects.

While Phillips 66's growth prospects have contracted over the past few years as a result of several recent project completions, the company isn't without growth options. In fact, it could be on the cusp of another expansion wave given the growth projections coming out of the Permian Basin.