Please ensure Javascript is enabled for purposes of website accessibility
Free Article Join Over 1 Million Premium Members And Get More In-Depth Stock Guidance and Research
By Lee Samaha - Mar 21, 2017 at 11:47AM

The construction machinery equipment stock is trading on a rich valuation and has upside potential, but is it a good value on a risk/reward basis?

The stock market and Caterpillar Inc. ( CAT 0.51% ) management appear to be taking a different tone with regard to the construction machinery giant's outlook for 2017. The stock is up nearly 60% since the start of 2016 and now trades at a forward P/E ratio of 30. Clearly, the market is expecting a strong recovery in the coming years, but management's recent commentary has been somewhat more cautionary. What's going on, and who is right?

Essentially, the market is hoping for a trough in revenue and income margin in 2017. When Caterpillar's trailing-12-month revenue (TTM) previously troughed, the pickup in the EBITDA margin was substantial: Earnings before interest, taxes, depreciation, and amortization recovered in the typical "V"-shape fashion found in cyclical upswings. 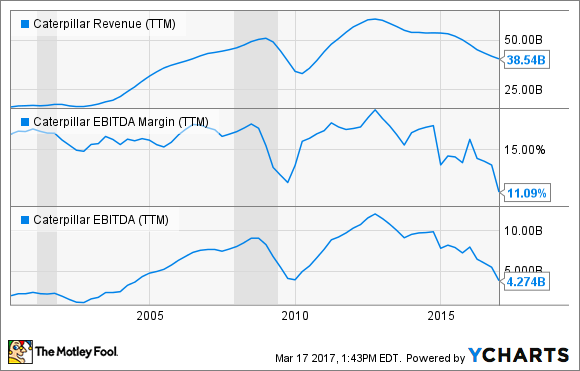 Given the company's exposure to infrastructure spending -- due for a boost thanks to President Trump -- and a bottoming out in energy and mining commodities, Caterpillar looks well placed to bounce back. Indeed, the bullish case takes heart from the outlooks of competitors such as Deere & Company ( DE -0.39% ) in construction. Deere recently raised its forecast for 2017 growth in construction and forestry equipment sales, from 1% up to 7%.

But here's the thing: Caterpillar's management hasn't been cheerleading the stock higher, because at three separate events it appears to have taken a cautionary position.

First, at a Credit Suisse conference on Dec. 1, management argued that the analyst consensus for sales of $38 billion in 2017 was reasonable but described the consensus for profit per share of $3.25 as being "too optimistic considering expected headwinds."

Second, on the fourth-quarter earnings call on Jan. 26, management gave its outlook for profit per share of $2.90 for 2017 and reduced the midpoint of its sales outlook to $37.5 billion -- the range being $36 billion to $39 billion. Although the reduction was mainly due to adverse currency movements, management didn't strengthen its outlook. In fact, CEO Jim Umpleby noted, "While we see signs of positive activity in some of our key end markets, the overall economic environment remains challenging." 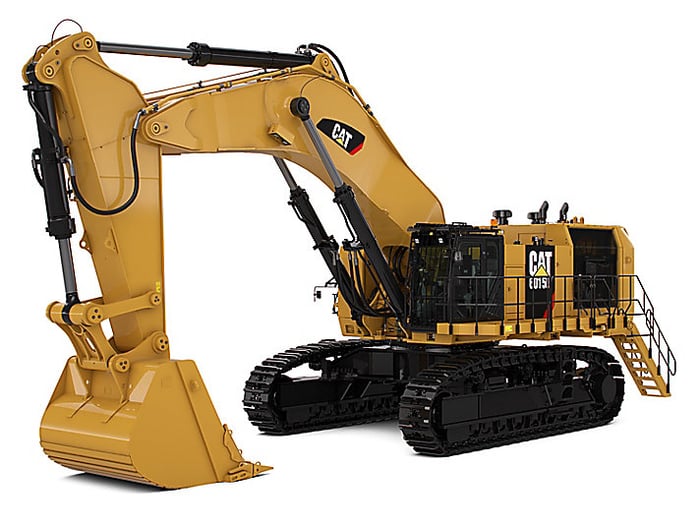 Third, at a recent J.P. Morgan industrials conference, Amy Campbell, Caterpillar's director of investor relations, sought to temper enthusiasm in describing the concern that North American dealers might "get ahead of end user demand" by ordering too much equipment in the first half "without the demand being there in the second half."

Of course, if dealer inventories get too high relative to sales -- and they usually rise in anticipation of selling season for equipment -- then Caterpillar is likely to see more pricing pressure in the future. That's the last thing management wants right now, because there are signs it's tentatively getting over the worst of it.

All about energy and mining

Moreover, at the J.P. Morgan, event Campbell touched on a recurring theme with Caterpillar -- its direct and indirect exposure to oil and mining commodity prices. The North American construction market has been robust for some time, but it hasn't translated into earnings for the company because of its exposure to oil and gas-related construction -- an area where a glut of equipment has occurred.

Each segment has seen significant revenue declines in the past few years, with construction sales down 24% from 2014 to 2016. Resource industries and energy obviously rely on commodity capital spending, and even transportation is heavily reliant on railroads that freight bulk commodities. In other words, energy and mining matter to Caterpillar. 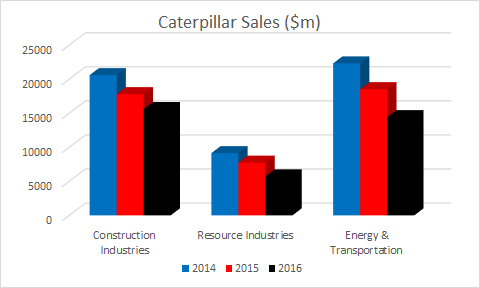 Caterpillar management's caution helps to draw attention to the risks facing the company. In this regard, it's worth focusing on three things.

First, Caterpillar's valuation multiple is significantly higher than what it was in the last trough in revenue. 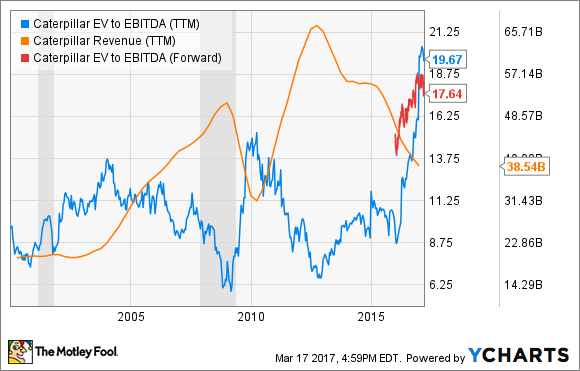 Second, if oil and commodity prices move sideways, or even if they don't move significantly higher, then Caterpillar could face more pricing pressure.

Third, this isn't a normal trough -- which might be accompanied by an overall V-shaped recovery in the economy -- and Caterpillar is unlikely to see a sharp pickup in revenue and earnings compared with previous recoveries.

All told, Caterpillar does have upside potential, but it needs a strong economy and improving energy and commodity prices. There may be cheaper stocks to play these themes than a stock trading on such a high rating.