Please ensure Javascript is enabled for purposes of website accessibility
Log In Help Join The Motley Fool
Free Article Join Over 1 Million Premium Members And Get More In-Depth Stock Guidance and Research
By Ashraf Eassa - Mar 22, 2017 at 7:30AM

It's high time for updates to this important product line.

Last year, Apple (AAPL 2.45%) hosted an event at which it introduced, among other things, the 9.7-inch iPad Pro. The device was essentially the spiritual successor to the iPad Air 2, offering up improvements across all major vectors, including the display, processor, cameras, and support for the Apple Pencil.

It's important for computing device companies to release new products on an annual basis (if not faster) to continue to stimulate demand for said devices. That's why Apple aims to release new iPhones each fall, and that's why personal computer makers and other smartphone makers also refresh their product lines at rapid clips. 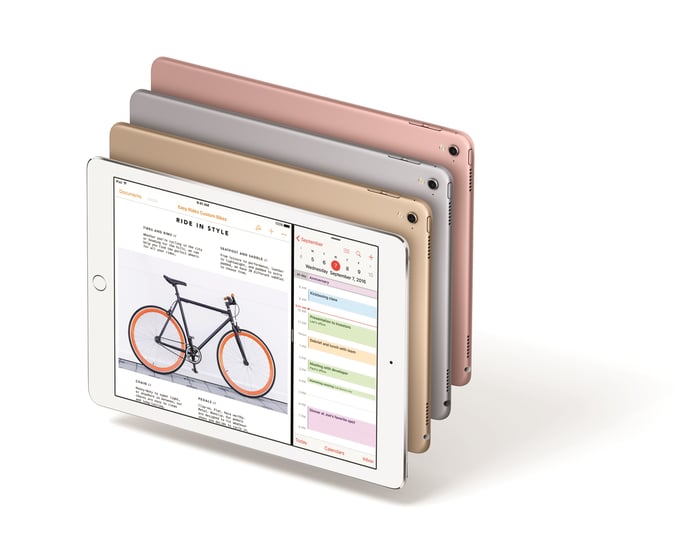 It's interesting, then, that the company has yet to update its iPad Pro lineup.

Apple first introduced the 12.9-inch iPad Pro in November 2015 and debuted the 9.7-inch iPad Pro in March 2016. It's been about a year since the latter launched and nearing a year and a half since the former made it into the marketplace.

Apple's iPad business would clearly benefit from launching new models of both devices, with the 12.9-inch model -- which lacks features that the cheaper 9.7-inch model has, like a wide color True Tone display -- sorely in need of a technological shot in the arm.

DigiTimes said about a week ago that the 10.5-inch iPad Pro -- which is widely expected to replace the current 9.7-inch iPad Pro -- is supposed to begin mass production this month (it may have already, given how late into the month we are) and launched at an event in "early April."

If that's true, then the "smaller" iPad Pro lineup remains on track to launch roughly a year after the original 9.7-inch iPad Pro -- staying true to the annual cadence.

What's more interesting, though, is that the replacement for the current 12.9-inch iPad Pro -- the device that's arguably much more in need of updating than the 9.7-inch model -- seems to be some ways off. DigiTimes' sources claim that "volume production of the 12.9-inch iPad Pro may kick off in May-June."

If true, then Apple could see continued sales declines of its 12.9-inch iPad lineup for several more months, especially as the company's product mix stands to shift toward the "new" 10.5-inch model.

What's the hold up?

If Apple is still two to three months off from mass production on the new 12.9-inch iPad Pro (and, to be clear, DigiTimes says that the "production schedule" for this new model "remains unclear"), and considering that Apple would clearly prefer fresher product in the market to sell, it makes sense that Apple is facing some technical challenges.

Perhaps the company is suffering from low yield rates on a critical component (for example, Apple could be planning a major display technology update for the 12.9-inch iPad Pro and the new displays might be hard to build), or maybe a critical technology slated to be used in the new iPad just wasn't ready in time for a late March/early April launch.

On the negative side, if my hypothesis is right, that'll mean a longer wait time before Apple brings a new, large-screen iPad into the world. A potential positive, though, is that the changes that Apple is making could be quite substantial and compelling for consumers.