The department store chain's annual report made it clear that the company faces significant challenges -- but it wasn't all bad news for investors.

After several years of being a Wall Street darling, Nordstrom (JWN 5.42%) has fallen out of favor since 2015 as it has been hit by some of the same negative trends that have hurt the department store sector as a whole.

Nordstrom's recently released annual report confirms some of the bad news that has been making the rounds. That said, there were also some nice surprises for investors hidden within the report. Let's take a look at five important highlights.

During fiscal 2016, Nordstrom spent a fairly modest $277 million on share repurchases. However, the company ended the year with $1 billion of cash on hand, giving it plenty of ammunition to return more cash to shareholders this year.

With Nordstrom's stock price having fallen recently, management is doing just that. Between Jan. 28 and March 1, the company bought back $120 million of stock. As of March 1, Nordstrom's board had authorized an additional $500 million of share repurchases through Aug. 31, 2018.

If Nordstrom is able to build on its strong 2016 cash flow performance -- free cash flow was $550 million last year -- it could potentially complete the new buyback program by the end of fiscal 2017. Based on Nordstrom's current $7 billion market cap, this would be enough to reduce its share count by an additional 7%.

Nordstrom has invested heavily over the past five years to enter the Canadian market. The company's operations in Canada are finally starting to contribute a meaningful amount of revenue. Nordstrom's sales in Canada totaled roughly $300 million in 2016.

Last fall, Nordstrom opened two new Canadian stores, including a flagship store in downtown Toronto, bringing its store count in Canada to five. Nordstrom will open a sixth store in Canada this fall. The impact of this ongoing store expansion could help Nordstrom reach $500 million in revenue from Canada this year. 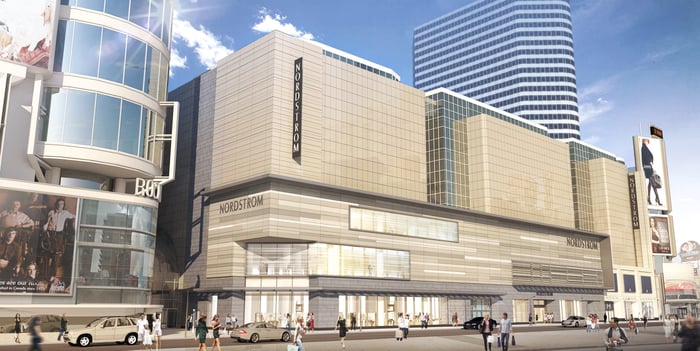 Nordstrom's Canadian operations aren't profitable yet, due to the expense of opening new full-line stores. However, with no additional full-line stores planned after this year (at least for the next few years), Nordstrom should turn profitable in Canada soon.

Nordstrom's domestic full-line stores remain quite profitable. However, that profitability is being undermined by falling sales per square foot.

Nordstrom still has significantly higher sales per square foot than most department stores. However, that is largely driven by the fact that most Nordstrom stores are located on prime real estate. Sales per square foot will probably decline again in 2017. If this trend continues, it may turn out that the real estate under Nordstrom's stores is worth more than the full-line business itself.

Borrowing costs are about to decline

Nordstrom has a very good credit rating. Nevertheless, it does have a significant debt load, with about $2.8 billion of outstanding debt at the end of fiscal 2016. The company's net interest expense totaled $121 million last year, which was significant relative to its adjusted operating income of roughly $1 billion.

However, Nordstrom will get some interest expense relief starting in 2017. Next month, it will redeem $650 million of long-term debt that carries a 6.25% interest rate. It is being refinanced with new debt at lower interest rates. As a result, Nordstrom's annual interest expense will decline by about $11.6 million going forward, providing a small but sustainable earnings boost.