Please ensure Javascript is enabled for purposes of website accessibility
Log In Help Join The Motley Fool
Free Article Join Over 1 Million Premium Members And Get More In-Depth Stock Guidance and Research
By Reuben Gregg Brewer - Mar 25, 2017 at 8:10AM

Silver prices have rebounded from their lows, and these three silver stocks still have material investor appeal.

Silver is an interesting precious metal. Like gold, it's a store of wealth, but silver gets used a lot more than gold in industrial applications. For investors, that means a more stable demand profile for silver stocks like Silver Wheaton Corp. (WPM 2.77%) and miners like Pan American Silver Corp. (PAAS 2.53%) and Great Panther Ltd (GPL -0.73%). Add in a touch of balance-sheet safety, and the outlook for this trio of silver stocks is solid, no matter what the commodity market brings.

The first company for investors to consider here is Silver Wheaton. It's a streaming company, not a miner. That means it gives miners upfront cash payments for the right to buy silver (and gold) at reduced prices in the future.

Miners use the money to shore up balance sheets, or invest in their businesses. Silver Wheaton, meanwhile, locks in below-market prices for precious metals. The company pays around $4 an ounce for silver -- roughly 60% of revenues -- and $400 an ounce for gold (around 40%).

Those prices are well below the current spot price of silver and gold, which is a good reason to like Silver Wheaton. But that's not the only reason. Part of the company's business model is to ink streaming deals with short-term financing, and then permanently finance by issuing stock. The company currently has around $1.3 billion outstanding on a $2 billion term loan that matures in 2021 (around 20% of the capital structure).

Other than the term loan, the company basically has no debt. And because it's a financial investor, it has no mining costs to deal with. Cash flow and share issuances will be used to pay the term loan down over time to free up capital for more investments, as needed. It's a unique model that makes Silver Wheaton more like a specialty finance company -- that gets paid in silver and gold -- than a miner.

But there's actually not much need to rush into investments right now. This is because the operating mines that Silver Wheaton has on the books today should keep production flat over the next five years. Growth, meanwhile, should come from development and expansion projects that are already on the books. So Silver Wheaton has a solid balance sheet, a good outlook for production growth, and no need to find big new investments. 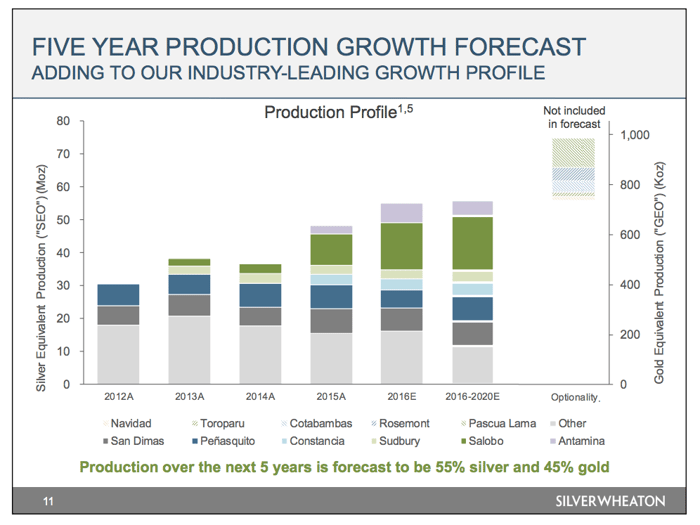 What's interesting is that Pan American Silver is working on projects that it believes will lead to expanded production in 2018 and 2019. And 2017 is the last big year for costs on those projects, which means expenses will be materially lower as production ramps up. That's much more interesting! The company's goal is all-in sustaining costs of $9.30 an ounce in 2019, down from an expected $11.50 or more this year. 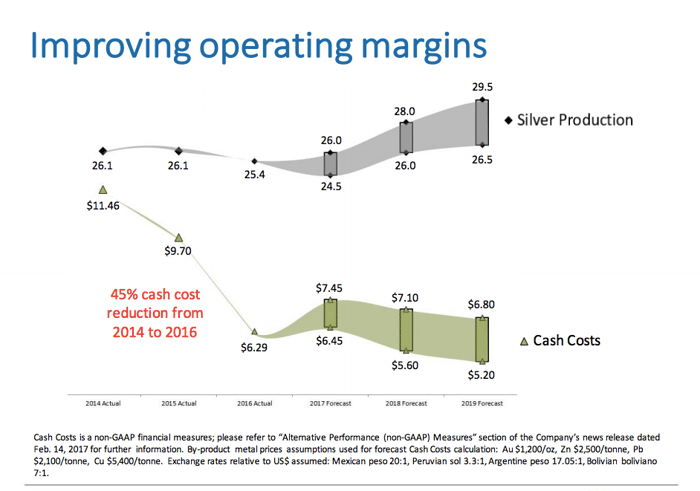 So there's a potential upside on production and an opportunity for cost reductions. Now add in the fact that long-term debt makes up just 2.5% of the capital structure. Pan American Silver easily has the foundation to execute its plans and it's worth a deep look.

Great Panther Limited is the last company on the list, with a tiny $300 million market cap. It only has two mines, and all-in sustaining costs are on the high side. That makes it a marginal miner that needs relatively high silver prices to make money.

But it has no long-term debt, and has just agreed to buy a new asset, the Coricancha mine in Peru for $100,000, with earnouts that could bring the price up to $10 million. Although the mine is currently not operating, Great Panther believes it can produce 3 million silver-equivalent ounces a year from the mine after spending around $25 million and roughly a year to get it up and running again. Great Panther is projecting production of around 4 million silver-equivalent ounces in 2017, so the new mine could really boost Great Panther Silver's growth prospects.

No debt and a potentially huge new mine investment make Great Panther Silver worth a look for those willing to buy a small miner.

Silver Wheaton probably has the broadest appeal here since it's really a collection of mine investments with built-in low costs. It's a great way to invest in silver without having to take on the risks of mining.

If you don't mind owning miners, then Pan American Silver's low debt and modest growth profile should be of interest, particularly since capital spending is expected to fall dramatically, just as production growth is projected to pick up in 2018 and 2019. Great Panther Silver, meanwhile, is the smallest and probably riskiest of the trio -- though it has no debt. But it has the biggest growth opportunity ahead if the mine it's buying pans out as expected. All three, however, could be great options for investors looking at silver today.