If lululemon athletica (NASDAQ:LULU) is going to keep clawing its way back into investor fancy, it's going to have wow investors this week. The retailer of high-end athletic apparel reports fiscal fourth-quarter results after Wednesday's market close, and the stock will have to justify its recent bounce.

Shares of Lululemon declined for three consecutive years before rising 24% last year. The stock has been marching in place so far in 2017, down 1% year to date. The stock was a market darling until it proved mortal in 2013 with the see-through yoga pants scandal. Lululemon had to recall its black Luon pants because of their sheerness. This could've been dismissed as a one-off flub, but the brand's reputation took a hit. The retailer's clothing lines aren't cheap. It didn't help that the stock also wasn't cheap. Lululemon needed to keep performing at a high level to justify its lofty market multiples, and something as simple as yoga pants that proved to be see-through when some wearers would bend over was enough to set the stock's demise in action.

The stock began bouncing back last year, and after a flat showing so far this year, it faces its first big test of 2017 with Wednesday afternoon's quarterly report. 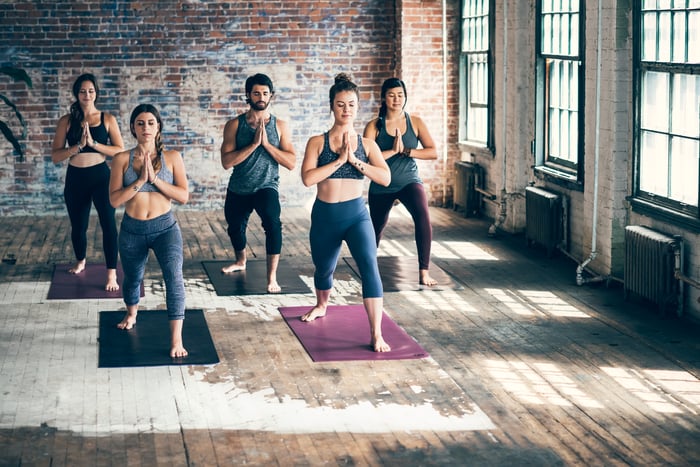 Analysts see another period of growth at Lululemon. Wall Street pros see revenue climbing 11.3% to $783.7 million since the prior year's holiday quarter. They see earnings growing even faster, climbing 19% to $1.01 a share.

Lululemon initiated guidance for the fourth quarter in early December, targeting $765 million to $785 million in net revenue and earnings per share between $0.96 and $1.01. Lululemon updated its outlook a month later, narrowing its guidance to the high end of its earlier range. The early January tweak was calling for $775 million to $785 million in net revenue, with earnings per share clocking in between $0.99 and $1.01.

The timing of the update is important. Revising its outlook in a bullish manner after the telltale holiday shopping season is an encouraging sign. It confirms that the chain didn't sputter like many of its more pedestrian retail peers in December. The update also came with just a couple of weeks left in the fiscal period, explaining why analysts are now perched at the high end of Lululemon's guidance at both ends of the income statement.

When yoga mats are welcome mats

Oppenheimer analyst Anna Andreeva put out a bullish note two weeks ago, reiterating her bullish "outperform" rating and ambitious $75 price target. She thinks Lululemon is a stock worth owning as one of the few consumer-facing names with double-digit earnings growth potential. She had raised her target from $70 back in December after its better-than-expected fiscal third-quarter report.

A few weeks before Anreeva's update, OTR Global put out an upbeat note. OTR pointed out that among the store managers it checked in with, nearly all seemed to agree that the chain met or beat the holiday quarter's sales plan.

Shares of Lululemon rocketed higher after its well-received third quarter. It was the first time in a year that it had beaten analyst profit targets. If Lululemon wants to build on last year's gains, it will need a repeat performance on Wednesday.