The home-furnishings specialist jumped after a strong quarterly report. Here's what investors need to know.

Shares of Restoration Hardware Holdings Inc. (RH -4.56%) were up 13% as of 12:15 p.m. EDT after the home-furnishings retailer announced better-than-expected fiscal fourth-quarter 2016 results.

For its quarter ended Jan. 28, 2017, Restoration Hardware's revenue declined 9.3% year over year to $586.7 million, and adjusted net income fell 32.3% to $27.9 million, or $0.68 per diluted share. But Wall Street was even more pessimistic, with analyst consensus estimates predicting adjusted earnings of $0.65 per share on revenue of $585 million. 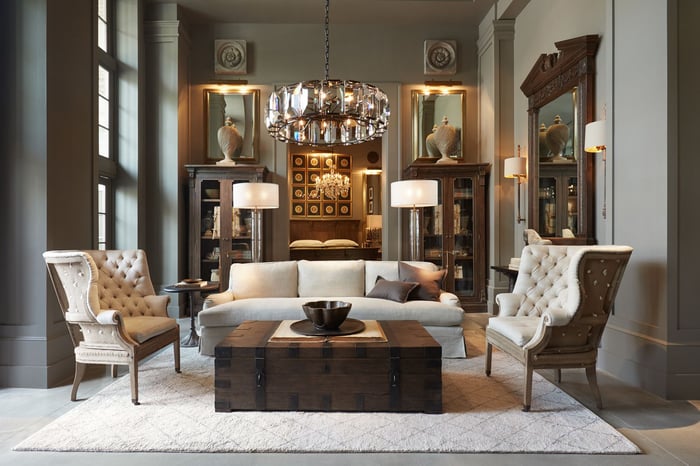 "Exiting fiscal 2016, we are now through the most uncertain stages of our transformation," elaborated Restoration Hardware Chairman and CEO Gary Friedman. "We made several strategic investments and changes to our business last year, which temporarily depressed financial results in the short term, that we believe will strengthen our brand and position the business for accelerated growth in fiscal 2017 and beyond."

Restoration Hardware anticipates revenue in the current quarter to climb 16% to 20% year over year, or to a range of $530 million to $545 million, with roughly 5 percentage points of that growth attributed to its acquisition of Waterworks and 5 percentage points related to higher outlet and warehouse sales driven by accelerated inventory optimization initiatives. On the bottom line, that should translate to adjusted net income of $0.8 million to $2.4 million, or $0.02 to $0.06 on a per-share basis.

All things considered, between Restoration Hardware's relative outperformance last quarter and its encouraging outlook, it's no surprise to see investors celebrating today.