Please ensure Javascript is enabled for purposes of website accessibility
Log In Help Join The Motley Fool
Free Article Join Over 1 Million Premium Members And Get More In-Depth Stock Guidance and Research
By Daniel B. Kline - Mar 30, 2017 at 6:27AM

People are ditching traditional pay-television services, but that's not the whole story.

For years, the media has written about cord-cutting -- people dropping traditional pay television in favor of streaming solutions -- as a potential industry killer.

Much like the way digital delivery and inexpensive all-you-can-listen services devastated the music business, the explosive growth of Netflix was supposed to cripple companies including Charter Communications (CHTR 1.49%), Comcast (CMCSA 0.51%), and AT&T (T 1.65%). The difference, however, and it's an important one, is that while more people cut the cord each year, they are not cutting their relationship with their pay-television provider in many cases because they still need internet service. In addition, most cord-nevers -- people who have never had a cable or satellite subscription -- choose to subscribe to broadband as well.

That's leading to a changed market where there will be clear winners and losers. Cable itself may be suffering a slow death, but some pay-TV providers will suffer while others thrive. 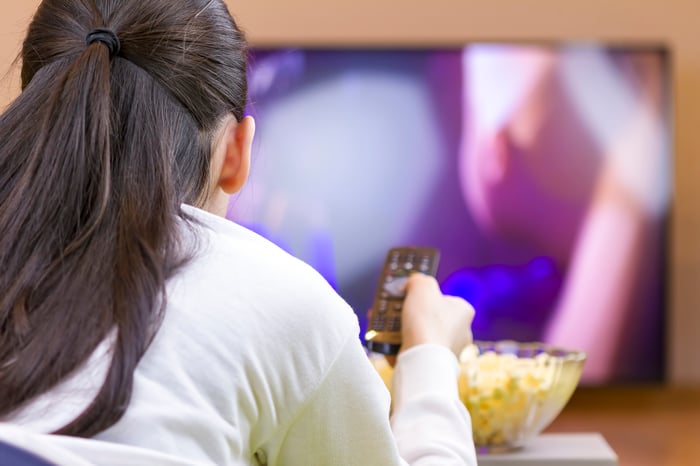 Cord-cutting is a provable fact. The largest pay-television providers in the United States, a group that covers about 95% of the market, lost roughly 795,000 subscribers in 2016, according to data compiled by Leichtman Research Group (LRG). That's close to double the 445,000 subscribers lost in 2015, which was more than triple the 125,000 who dropped cable in 2014. The LRG numbers include net losses for cable and phone companies and net gains for satellite services and internet-delivered options.

The numbers for 2016 include as net adds in the internet-delivered category 645,000 people who subscribe to DISH Networks' (DISH -1.16%) Sling TV and 200,000 who pay for AT&T's DirecTV Now streaming services. That group of 845,000 could include both people who never had cable previously and ones who downgraded their service from a full-price package. You could still call them pay-TV subscribers, but in most cases they are likely paying less than people who buy traditional cable or satellite packages.

Pay-television is a balloon with a leak. It might be a slow leak, but the end result is the same.

Broadband is salvation for some

While cable customer counts have been steadily falling, broadband subscriptions have been going up in even greater amounts, according to LRG. The 14 biggest cable and telephone company providers of internet service in the U.S., covering the same 95% of the market as the pay-TV providers above, gained 2.7 million subscribers in 2016. That's down slightly from 3.1 million in 2015, and 3 million in 2014.

Traditional cable companies that offer both cable and internet, including Charter and Comcast, have gained dramatically more broadband customers than they have lost cable customers over the past three years. That has not been the case for the phone company providers including AT&T, which have given up market share, and since DISH does not sell internet service at all, it stands to be the biggest loser.

The number of people cutting the cord is a steady trickle, but the trend shows that it's going to escalate. Those consumers, however, while leaving their cable bill behind, did not suddenly lose interest in watching television-style programming.

In most cases cord-cutters are simply opting to watch streaming video, both paid and free services, rather than buying a traditional pay-TV bundle. Opting for streaming entertainment requires a good internet connection and that has pushed Comcast and Charter to new heights. For now, the phone companies have suffered, generally because they offer older, slower internet technology, but they could reverse that trend by upgrading their networks.

For the companies offering multiple services, including internet, the slow death of cable will be no different than the torturous demise of landlines. Some will manage it better than others, as has already been the case, but it's a problem that can indeed be managed.