Last year, Intel (NASDAQ:INTC) began shipping products based on a technology that it refers to as 14-nanometer+. This is a performance-enhanced version of the company's initial 14-nanometer technology that first went into production in 2014. Intel claims a 12% improvement.

That technology is currently being used to manufacture the company's seventh-generation Core processor family -- Intel's current personal-computer processor product line spanning notebook and desktop computers -- and is expected to be used to build the company's upcoming Skylake Xeon processors for data centers. Let's take a closer look at what Intel had to say about this technology and what it should mean for the company's future products built using this technology.

Another large boost in performance

Intel claims that 14-nanometer++ delivers either 26% better performance compared with its original 14-nanometer technology, implying a 12.5% improvement over 14-nanometer+, or up to 52% lower power. 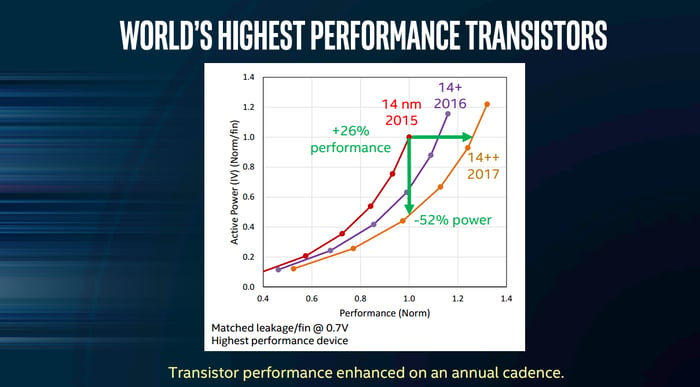 As we saw when Intel moved from 14-nanometer to 14-nanometer+, those performance enhancements on the manufacturing side can translate into nice performance gains at the product level. For example, Intel's Core i7-6640U for notebooks came rated with a base frequency of 2.4GHz and a maximum turbo frequency of 3.4GHz.

The 14-nanometer+ version of this chip -- the Core i7-7660 -- runs at a base frequency of 2.5GHz and delivers a maximum turbo speed of 4GHz. Maximum turbo to maximum turbo, we see a nearly 18% jump in frequency because of the migration to 14-nanometer+ and the other enhancements Intel probably did to the underlying circuit design of the chip.

Even in the high-performance desktop market, Intel's 14-nanometer+ technology delivered nice gains. The Core i7-6700K gaming chip came rated at a base speed of 4GHz, and it could run a single core at up to 4.2GHz. The successor to this chip, built on 14-nanometer+, ran at a base speed of 4.2GHz, single-core turbo of 4.5GHz, and all-core turbo of 4.4GHz.

I would expect, then, Intel's 14-nanometer++ technology to help deliver a solid improvement in product performance when it rolls out later this year. More on that in a future column.

However, I don't believe that both statements are likely to be true simultaneously.

For example, in moving from 14-nanometer+ to 14-nanometer++, Intel says it's relaxing the transistor gate pitch from 70 to 84 nanometers. This certainly helps Intel improve performance, but it will undoubtedly come at some cost to chip-level transistor density.

This is a good trade-off, especially since consumers are more interested in higher performance than in the density of the manufacturing technology that's used to build the chips inside their computers, but Intel's marketing makes it seem as if 14-nanometer++ delivers the density and performance advantages simultaneously, which I'm not happy about.

Intel has committed to delivering newer, better products to the market on an annual cadence, and the company's work to deliver 14-nanometer++ and products built on that technology should allow it to fulfill that promise.

What I'd like to see from Intel now is sustained execution with respect to these annual product improvements. If it can deliver on this promise in the years ahead, then it should be in solid shape across its business units.