In the second half of this year, processor giant Intel (NASDAQ:INTC) is expected to launch the first of its next-generation family of computer processors, marketed as eighth-generation Core. The first products to roll out are expected to be a family of chips currently code-named Kaby Lake Refresh, with products code-named Coffee Lake (for higher-end/higher-performance systems) following in the first half of 2018.

Kaby Lake Refresh will be what Intel calls a "U" series processor. U-series chips tend to be Intel's highest-volume runners, targeting the bulk of the notebook personal computer market, as the slide below illustrates: 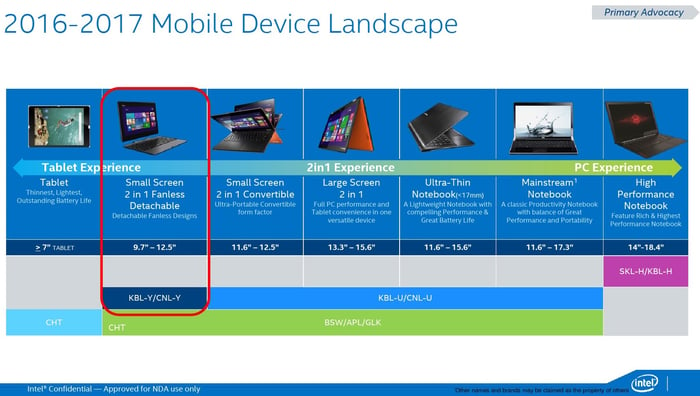 The Kaby Lake Refresh parts will come in what Intel refers to as a "4+2" configuration, meaning that it will have four processor cores paired with a graphics processor in a GT2 configuration (the "middle-of-the-road" graphics configuration from Intel). 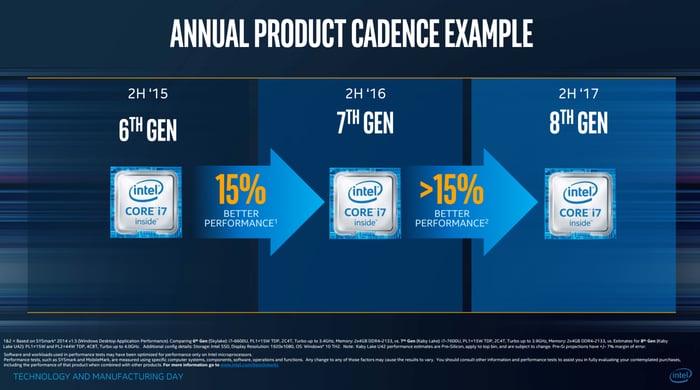 The purpose of this slide was to show investors that Intel is committed to improving its manufacturing technology performance and product designs to deliver better stuff each year.

In the fine print found at the bottom of the slide, Intel provides details about the system configurations used to generate the claims with respect to chip performance.

Intel's headline claim is that its eighth-generation Core processor family will deliver ">15% better performance" compared to its current-generation seventh-generation Core chips. Of course, the devil is in the details (or, in this case, the fine print).

First, the fine print confirms that the chip will pack four cores, up from the two cores present on the company's current Kaby Lake-U series chips. Furthermore, Intel says that the upcoming Kaby Lake Refresh 4+2 chip will run at a maximum single-core turbo speed of 4GHz (+2.56% from the top Kaby Lake-U 2+2 part, though there is a 2+3e part currently available that offers 4GHz single-core turbo ).

The combination of more cores and ever-so-slightly higher-frequency cores appears to allow Intel to deliver upon its claimed ">15%" performance improvement. It's worth noting, however, that Intel says that this performance estimate is a pre-silicon estimate (meaning that the number comes from simulations and not from measuring an actual chip) and that pre-silicon estimates have a "+/- 7% margin of error."

Also, Intel explicitly says that these performance comparisons refer to the "top bin" (that is, the best chips) parts within each respective product family, so the gains elsewhere in the product stack might not be as large as those being claimed here.

This is how Intel is leveraging 14-nanometer++

What Intel seems to be doing is using these more powerful/power efficient transistors to boost the number of cores that it can cram into a low-power notebook processor.

This is an interesting design choice, as Intel has spent many years focusing on trying to improve the per-core performance of its notebook and desktop processors (through a combination of frequency boosts and architectural gains) while keeping core counts stagnant.

More cores should allow for dramatically higher performance in applications that can take advantage of multiple cores and should also serve to improve multi-tasking performance. It will be interesting to see if "more cores" ultimately proves to be a successful marketing point in the segment into which Intel will be selling Kaby Lake Refresh.

At the end of the day, Intel wants to deliver new chips at a predictable annual cadence because Intel's own customers -- the companies that design and market personal computers -- really want new chips to build new systems around.

What Intel is doing with its eighth-generation Core processors is leveraging improved manufacturing technology to be able to stuff more processor cores into a given thermal design power. This is a reasonable move given that the Kaby Lake Refresh/Coffee Lake were probably "late" additions to the company's product road map, but Intel can't rely on core count increases indefinitely.