Please ensure Javascript is enabled for purposes of website accessibility
Log In Help Join The Motley Fool
Free Article Join Over 1 Million Premium Members And Get More In-Depth Stock Guidance and Research
By Maxx Chatsko - Apr 4, 2017 at 9:09AM

The company's recent reorganization should stoke the flames of optimism among investors.

Diversified chemical company FMC Corp (FMC 0.46%) became just a little less diversified last week. It announced a deal that packaged a $1.2 billion payment and its health and nutrition segment to DuPont (DD) in exchange for a significant portion of the latter's crop protection assets. The move will make it easier for DuPont to complete its mega-merger with Dow Chemical and leave FMC Corp with only two segments: agricultural solutions and lithium production. Risky? Perhaps, but the transaction simplifies operations while doubling down on more reliable markets with better growth prospects.

Management has already released preliminary expectations for the performance of the new assets in 2017 -- and investors have plenty to look forward to. In fact, the deal should make investors confident that FMC Corp's best days are still ahead of it. 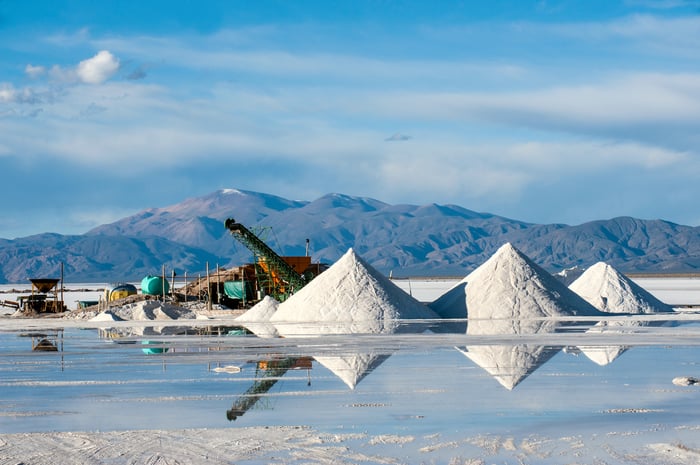 Operational diversity can be a great thing, but too much of it can create an unwieldy business. Consider that FMC Corp began 2017 selling products spanning crop protection (agriculture), battery and pharmaceutical manufacturing (lithium production), and specialty ingredients harvested from seaweed and wild fish (health and nutrition). There isn't really any overlap between the three -- and it began to show in recent years.

The company's health and nutrition segment reported an 11% decline in revenue from 2014 to 2016. While it was the second largest business unit, it went from contributing 25.6% of total revenue in 2014 to 22.6% last year. Operating margins were strong and gradually improving, but there were external factors negatively affecting operations that management couldn't control. Simply put, health and nutrition was holding the stock back.

Now that the segment has been sold to DuPont (which can probably scale the unit better in the long run), FMC Corp can focus on growing two very promising businesses: agricultural solutions and lithium.

The agricultural solutions segment was already FMC Corp's largest -- having generated $2.27 billion, or 69%, of total revenue last year -- but it's about to get a lot bigger. Acquiring a significant portion of DuPont's crop protection assets will immediately make the company the world's fifth largest player in agtech based on annual revenue. The segment is expected to achieve EBITDA of $475 million on sales of $3.8 billion in 2017, with the new assets kicking in an additional $1.5 billion in revenue for the year. That includes over $1 billion from three of the top insecticide products on the planet.

To be fair, even $3.8 billion in revenue is still a far cry from the three largest players in the industry (Monsanto generated revenue of $13.5 billion in 2016, and that was a down year). But with the top six companies merging into three, there should be quite a bit more shuffling of assets in the near future to appease global regulators. Therefore, FMC Corp could climb in the rankings without doing anything more -- or it could go all-in and continue to buy assets from peers desperate to win approval for their mergers.

Lithium may be the company's smallest segment, but it has no doubt been the primary driving force for the stock in the last two years. That's because the stock represents one of the few ways to gain exposure to the lithium production market without wading into penny stocks. FMC Corp, Albemarle Corp, and Sociedad Quimica y Minera de Chile represent a staggering 70% of the global lithium market. China's Tianqi Lithium owns another 16% market share, which doesn't leave much room for others. 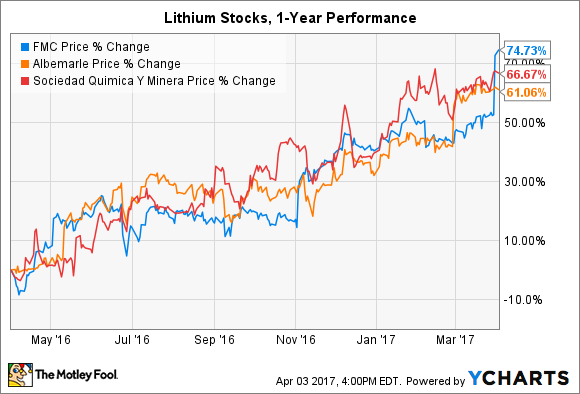 Market shares may change before the end of the decade as the industry consolidates and other reputable companies make serious long-term investments in lithium production, but today's major players don't plan on sitting idly by while newcomers chip away at their leadership positions.

Today, FMC Corp's lithium segment is dwarfed by the agricultural solutions segment. Excluding contributions from health and nutrition, lithium generated only 10% of total revenue and 15% of total operating income in 2016. That will be further diluted by the recent crop protection acquisition, but management is confident in the long-term trajectory of the business.

In May 2016, the company announced plans to triple the annual production capacity of lithium hydroxide (battery-grade material) to 30,000 metric tons by 2019. It also announced a sourcing agreement for 8,000 metric tons of lithium carbonate (raw lithium) that will begin in mid-2018, which shows that the ambitious expansion plans aren't fluff. If all goes according to plan, FMC Corp will ramp up production just as major automakers ramp up the production of electric vehicles. It would be difficult for investors to lose in that scenario.

FMC Corp made significant changes to its business by stepping in to help DuPont and Dow Chemical meet the demands of European regulators wielding the power to approve their megamerger. Downsizing from three segments to two may seem risky, but I think it was a smart move that offloads a struggling business unit and wisely focuses resources on the two with promising growth prospects. Given that the agtech industry has been caught in a down cycle and that global demand for lithium is expected to grow handsomely in the long term, I think it's easy to imagine that the stock's best days are ahead.