Please ensure Javascript is enabled for purposes of website accessibility
Log In Help Join The Motley Fool
Free Article Join Over 1 Million Premium Members And Get More In-Depth Stock Guidance and Research
By Daniel Miller - Apr 8, 2017 at 9:51AM

Markets were able to shake of an attack on Syria and weaker-than-expected jobs numbers. Here are some more optimistic highlights from the week.

Surprisingly, the markets were mostly able to shake off a couple of developments that often send the market instantly spiraling lower. President Donald Trump ordered an air strike on Syria, and then the markets were hit with the weakest jobs report in nearly a year. More specifically, The Labor Department announced the U.S. created just 98,000 jobs in March compared to estimates that called for 185,000 new jobs.

The markets shook off those factors until the last couple of hours of trading, when a minor sell-off occurred. With that aside, let's look at some highlights from companies making big moves, or positive headlines, this week. 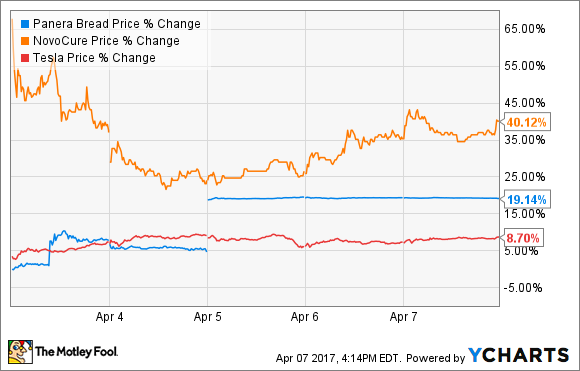 Shares of Panera Bread Company (PNRA) jumped early in the week due to rumors that the company could potentially be bought out by a number of suitors. A couple of days later, that potential became reality when it was announced that the fast-casual chain agreed to a deal with JAB Holdings for $7.5 billion, including $340 million in debt -- the equivalent of $315 per share -- which immediately sent its stock price near the deal price.

What's in it for JAB Holdings, you ask? Despite trading near all-time highs, Panera bread is still attractive, thanks to its leading loyalty program engagement (roughly half of transactions), increased delivery potential and capabilities, and consistent menu innovations that are taking advantage of an increased focus on health and wellness. Those factors all combined to help Panera deliver comparable-store sales gains of 5.3% during the first quarter. 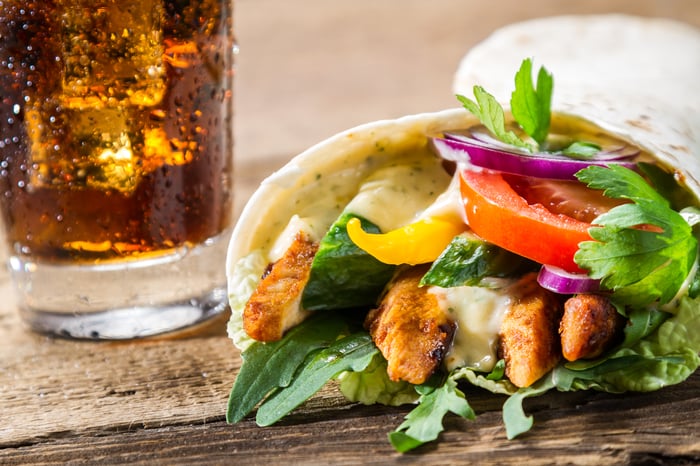 What's in it for Panera, you ask? Well, for one, it gets rid of investors in the public domain, which Panera CEO Ron Shaich said takes up much of his time. Rumor has it that JAB Holdings will be a hands-off type of owner, leaving management with increased capacity to work on improving its business out of the public spotlight.

What's in it for the consumer? It's business as usual, and if this all works out as intended, you'll probably end up enjoying your nearest Panera products even more.

On fire, in a good way

Shares of medical device company NovoCure (NVCR 7.08%) started the week absolutely on fire, opening more than 60% higher after reporting multiple clinical-trial updates. The company reported its phase 2 Panova study, which was testing a combination of NovoCure's Optune plus standard care chemotherapies for treating advanced pancreatic cancer -- and the results were solid. The trial showed that adding Optune more than doubled progression-free survival and one-year survival rates, and now it's on to a phase 3 trial.

Another big success came from NovoCure's Stellar trial, also studying the combination of Optune with standard care, testing treatment for malignant mesothelioma. The one-year survival rate was a staggering 50% higher in patients using the combination compared to control data. And these were just two of the positive trials announced, and all the data was thoroughly encouraging to investors, who have watched the stock shed roughly 60% of its value -- before this week's jump -- since its 2015 Initial Public Offering.

Shares of Tesla Inc. (TSLA 4.53%) were up 6% during intraday Monday trading, and up almost 9% for the full week after announcing record deliveries and production in the first quarter. The company shipped more than 25,000 vehicles during the quarter, which was higher than analysts' estimates calling for 24,200, and puts the company on pace to hit its first-half target of 50,000 units. Tesla's delivery mix was 13,450 Model S sedans and 11,550 Model X crossovers, with production checking in at 25,418 units.

"It's all about the Model 3 right now, but this is very good news," Ben Kallo, an analyst at Robert W. Baird & Co., told Automotive News. "25,000 units is the best we could have thought, and people are looking at Model 3 for growth."

What's wild about Tesla's valuation, which is getting tougher to defend, is that its market capitalization of $49 billion is now higher than Ford's $44 billion. But despite this, the young automaker remains largely unproven with high production levels, and that's what investors will continue to watch as we approach the Model 3 launch.