3D-printed shoes are coming to the mass market. Here's why it matters for investors in athletic-shoe companies.

Athletic-shoe giant adidas AG (ADDYY -0.51%) announced on Friday that it's partnering with venture-backed 3D printing company Carbon to manufacture Futurecraft 4D, a new line of athletic shoes for the mass market with 3D-printed midsoles that will eventually be able to be customized.

Adidas is on track to leave in the dust industry heavyweight Nike (NKE -0.65%) and other athletic-shoe industry players, such as Under Armour (UA 0.59%) (UAA 0.21%) and privately held New Balance, in the 3D-printed shoe race. All these competitors have announced or launched 3D-printed shoe initiatives in the past couple of years, but adidas is the first in the industry to announce concrete plans to produce 3D-printed shoes for the mass market. 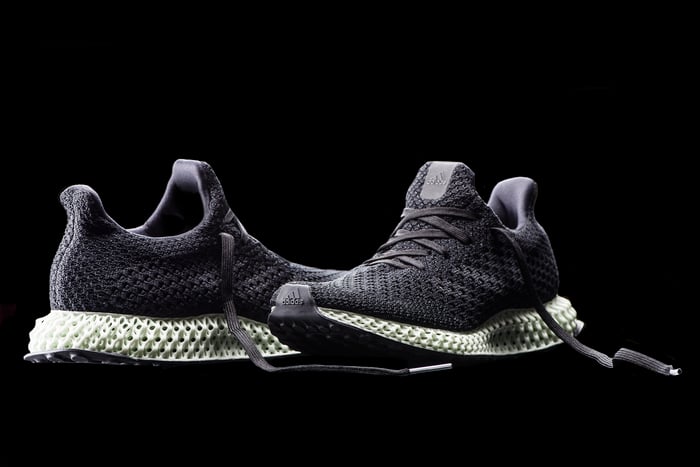 Adidas' first Futurecraft 4D will be a running shoe, though it appears the company has plans to eventually expand the line to include other types of high-performance athletic shoes.

As to the name, Futurecraft represents adidas' "journey to define the future of craftsmanship through exploring new technology, design, and collaboration in order to provide the best for each athlete," according to its press release. The "4D" represents adidas bringing 3D printing in the sports industry into a new dimension with respect to manufacturing scale and sport performance.

Unless Nike, Under Armour, New Balance, or one of the other industry players announces plans soon, adidas' Futurecraft 4D will be the first mass-market running shoes with 3D-printed midsoles. Futurecraft 4D is also the world's first high-performance footwear with midsoles produced by Digital Light Synthesis, enabled by Carbon's proprietary Continuous Liquid Interface Production technology. (Silicon Valley-based Carbon is privately held, so you can't buy stock in the company.)

Futurecraft 4D's midsole was designed using 17 years of running data adidas has collected from athletes. The midsole is made out of a blend of polyurethane and a unique ultraviolet light-curable resin proprietary to adidas that was developed with Carbon. It's a stiff elastomer that's 3D printed in a lattice structure to produce a high-performance midsole that's durable. Lattices are proving to be the structures of choice for the 3D-printed midsoles of athletic footwear because they're strong, yet lightweight. Lattices can not be made using traditional manufacturing techniques, so the 3D printing of midsoles isn't a gimmick; if optimally designed, these midsoles should help improve performance and lessen the chance of injuries, at least for some athletes.

The shoes feature adidas' proprietary Primeknit upper and Continental outsoles. Since 2007, Europe's leading tire maker has been supplying adidas with rubber compounds specially developed for outsoles for some of its athletic shoes. Continental claims that outsoles made with its compounds have grips that are up to 30% better than other outsoles. 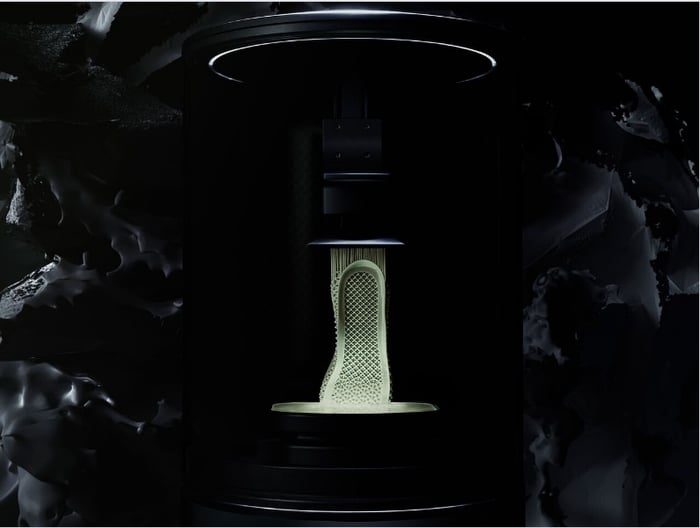 A midsole being 3D printed by a Carbon 3D printer. Image source: Adidas.

Futurecraft 4D will be the largest mass-produced 3D-printed product ever once production ramps to full scale -- that is, if no other product beats it to the finish line.

It currently takes 90 minutes to produce one midsole, though adidas and Carbon are working to develop new machinery that will reduce production time to 20 minutes.

It doesn't seem like the initial batches of shoes will be available with customized midsoles, based upon my read of the press release. However, adidas is planning on eventually offering performance shoes with 3D-printed midsoles tailored to an individual's specific physiological data and needs. There are several ways this could be accomplished, including gathering data in-store and/or having customers provide what they can online. These shoes will be produced in what adidas is calling "Speedfactories."

What this means for the athletic-shoe industry

Athletic shoes with 3D-printed midsoles followed by athletic shoes with customized 3D-printed midsoles promise to be a big business in the near future. Given the massive size of the global athletic-shoe market -- estimated at $81.9 billion in 2016, according to Statista --  this nascent subcategory could grow to be very substantial even if it captures just a relatively small chunk of the total market.

Moreover, this category should prove to be particularly attractive because it will surely be a premium category. Athletic shoes with 3D-printed midsoles should at least eventually be higher-profit margin products for the companies that produce them.

First-mover advantages can prove lasting. So, if adidas gets out way ahead of Nike, New Balance, Under Armour and others in the mass marketing of running and other performance athletic shoes with 3D-printed midsoles, it could capture customers that might prove hard for its competitors to later win over (or back).