The electric-car maker gets a big upgrade from Wall Street.

Shares of Tesla (TSLA 11.00%) jumped today, setting a fresh all-time record high of nearly $314 and also briefly overtaking GM as the most valuable U.S. automaker by market cap. The companies remained neck-and-neck in terms of market valuation as shares fluctuated during normal trading.

A lot of the bullishness on Tesla's part today comes from an analyst upgrade. Piper Jaffray analyst Alexander Potter has upgraded Tesla shares from neutral to overweight, while meaningfully ratcheting up the firm's price target from $223 to $368. That's a pretty big change, especially considering the fact that the prior price target was well below current prices, and the new price target represents nearly 20% upside. 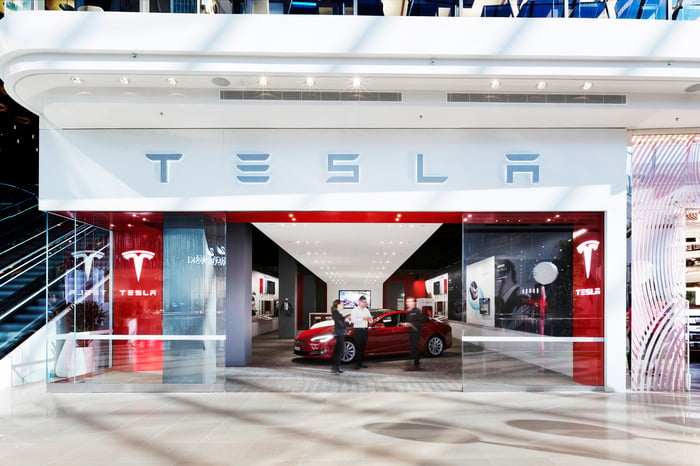 Potter and his team purchased a Tesla vehicle for research purposes, and have been driving it regularly for the past seven months. The analyst writes that Tesla vehicles have a "captivating impact" on both customers and investors, which peers have a hard time replicating. "Tesla isn't just another company" to customers, employees, and investors, according to Potter. He doesn't even think a botched Model 3 launch could hurt investor optimism, believing that shareholders would simply "withhold judgment."

Piper notes that Tesla faces plenty of risks going forward, but these risks don't faze the stock at all. "Even with all the risks, we think growth investors can't afford to ignore this stock," the analyst writes. In terms of unit estimates, Potter expects Tesla to miss its 2018 target of 500,000 deliveries, but thinks the company can make up for this in 2019 by delivering over 750,000 units. Gross margin is expected in the low- to mid-20s range on the automotive side (in line with Tesla's current profitability levels), and Potter does not expect Tesla to need additional capital raises going forward.

The analyst concedes that trying to assign a price target for Tesla requires a "creative" approach to valuation. This is likely due to the fact that Tesla has no directly comparable peers, given its ambitions for the energy sector as well as its different approaches to the auto industry, as seen in direct sales.

It's no secret that Tesla shares are almost impossible to value, which is also why bearish theses that are predicated entirely on valuation alone using conventional metrics may be doomed. That's not to say that Tesla doesn't make mistakes in terms of operations and execution, another common theme among bears, but misaligned body panels aren't bringing down the company anytime soon. Tesla is, and will remain for the foreseeable future, the ultimate story stock.