Please ensure Javascript is enabled for purposes of website accessibility
Log In Help Join The Motley Fool
Free Article Join Over 1 Million Premium Members And Get More In-Depth Stock Guidance and Research
By Lee Samaha - Apr 12, 2017 at 10:11AM

An analysis of operating income by segment reveals much about the underlying earnings trends at the company and what to expect in the future.

How does FedEx Corporation (FDX -2.50%) make most of its money? That's a question worth investigating since the company's chief moneymaking segment has changed hands a few times in the past decade. Moreover, a fuller understanding of how the company operates will help investors appreciate what's happening with the investment propositions at FedEx and its main rival, United Parcel Service, Inc. (UPS -0.34%). Let's take a closer look.

A breakout of FedEx's segment operating income shows that, for the first time since 2010, the express segment was the most profitable in 2016. However, ground revenue and profit continue to rise in seemingly inexorable fashion since the last recession. In a sense, you can think of this chart in two periods -- pre- and post-recession: 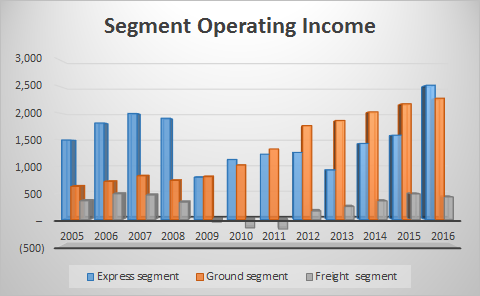 In the pre-recession period, the express segment was clearly the key income generator, but since the 2008-2009 recession, three key underlying trends have changed trading significantly at FedEx.

First, post-recession, the market backdrop changed with global trade failing to outgrow GDP growth in the past as countries increasingly adopted mercantilist trade policies. Indeed, the World Trade Organization has warned of increasing protectionism in the global economy.

In addition, customers at UPS and FedEx started preferring cheaper and less time-sensitive deliveries. The result of this trend is slowing growth in the more expensive delivery options in express -- total composite package yield in express is currently around $20,  compared with around $8 for ground.

The end result was a relative shift in profitability toward the ground segment and away from express.

E-commerce to the rescue

Second, strong e-commerce growth has led to a marked improvement in revenue and profit for the ground operations at FedEx and UPS: 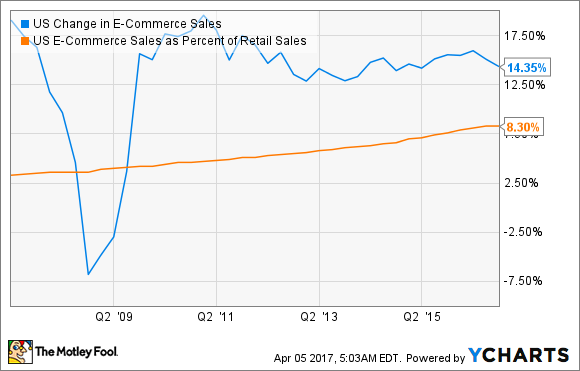 However, e-commerce doesn't come free. UPS and FedEx have both had issues servicing e-commerce deliveries during peak season. Consequently, capital expenditure plans have been increased and ground margin has come under pressure, particularly at UPS. 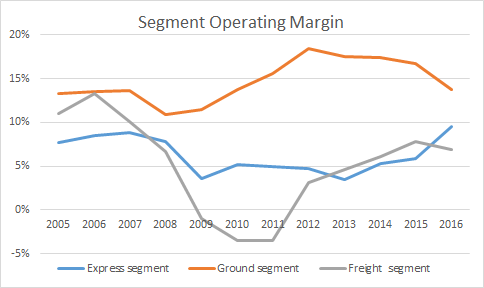 In addition, return on assets, measured here by segment operating income divided by segment assets, has declined in recent years for the ground segment as the ground network has been expanded. 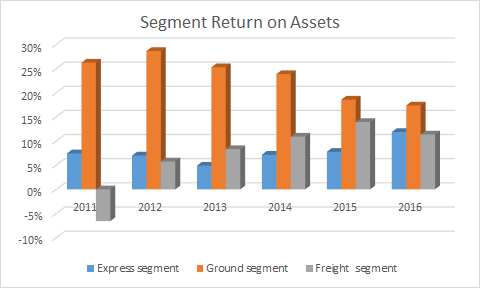 All told, ground income grew strongly post-recession, but it's started to slow in recent years because of margin pressure.

Third, the express segment's productivity has improved since 2013, largely a consequence of the company's profit improvement plan. In late 2012, management announced a three-year plan to cut express costs by some $1.7 billion. The plan involved actions such as modernizing the air fleet, making network efficiencies, and undertaking organizational rationalizations.

These actions have resulted in a margin recovery and a more productive express network in recent years. The end result has helped express take back its position as the leading money spinner for FedEx. For the next few years, management's focus will be on integrating the TNT Express acquisition, but -- in common with UPS -- it also needs to stop the decline in ground margins so it can best take advantage of burgeoning e-commerce growth. Meanwhile, a recovery in overall growth will be good for FedEx freight, and a concomitant pickup in global trade will particularly benefit the express segment.