Many people know Johnson & Johnson (NYSE:JNJ) for its consumer products, but the healthcare giant's pharmaceutical business has become the most important component of its long-term growth strategy. Combined with its medical device business, Johnson & Johnson serves the entire healthcare sector, and investors have been pleased at the progress that the company has made over time. Yet as investors prepare for Tuesday's first-quarter financial report, J&J still needs to convince them that the company can keep overcoming obstacles and produce steady but solid growth in its revenue and earnings.

Let's look more closely at Johnson & Johnson to see what it has been doing and what investors are thinking about going into the coming earnings report. 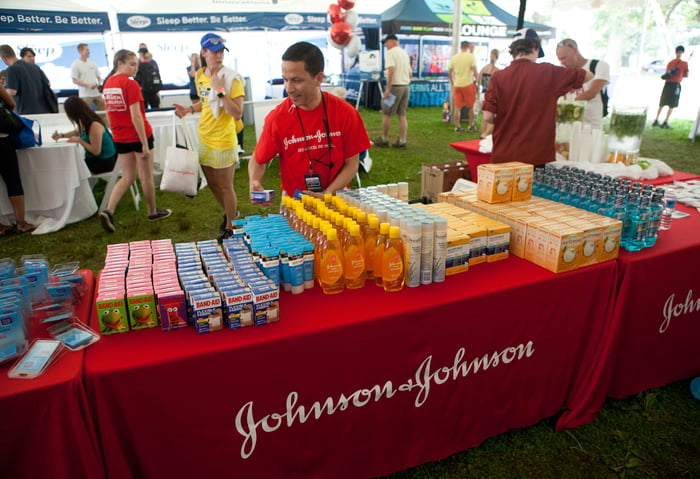 In recent months, investors have had mixed feelings about what's likely to happen to Johnson & Johnson earnings. They've boosted their first-quarter projections by $0.01 per share, but they've made more substantial reductions of 1% to 2% in their predictions for full-year earnings in 2017 and 2018. The stock, however, has done quite well, posting gains of 12% since late January.

Johnson & Johnson's fourth-quarter earnings report pointed to some signs of sluggishness that at first left investors somewhat underwhelmed. Sales climbed at just a 1.7% pace, and although adjusted earnings were better than most had expected, a substantial slowdown in the high-flying pharmaceutical segment's growth led some investors to worry. Moreover, J&J's guidance included projections of sales gains of just 4% to 5%, and projections for $6.93 to $7.08 per share in earnings also left shareholders dealing with mid-single-digit percentage growth that didn't entirely satisfy their hopes.

More recently, things have started looking up for Johnson & Johnson. In February, one of the company's marketing partners, Genmab, said that their Darzalex drug for multiple myeloma was likely to generate between $1.1 billion and $1.3 billion in sales during 2017. Moreover, even more promising is the fact that although Darzalex already serves a growing market of patients in the multiple myeloma space, Genmab believes that the treatment could also expand in use to cover other forms of cancer. Europe's Committee for Medicinal Products for Human Use recommended expanding Darzalex's marketing authorization to include combinations with key competitors' treatments, opening the door for more extensive use that should boost sales further. For Johnson & Johnson, Darzalex is just one of 10 drugs that the company expects to file for approval within the next two years. If even a few of those 10 are as successful as Darzalex is shaping up to be, then it could jump-start growth in the pharmaceutical segment and get J&J moving more quickly again.

Investors are also hoping for a reward in the form of a dividend boost. For 44 straight years, Johnson & Johnson has given shareholders annual increase in its quarterly payout, and recent hikes have been in the 6% to 8% range. That range makes it likely that J&J shareholders will see a $0.05-per-share increase, bringing the total payout to $0.85 per share quarterly and making the stock's yield an above-market average 2.7% going forward.

Still, Johnson & Johnson faces some hurdles. The Trump administration has been openly critical of pharmaceutical prices, and CEO Alex Gorsky was forced to take the position of defending J&J's pricing practices. As Gorsky pointed out, pharmaceuticals represent just 10% to 15% of spending on healthcare, and so focusing solely on drug prices would leave out a substantial portion of the contributing factors to rising prices. Nevertheless, with initial attempts at healthcare reform having met resistance, it's unclear what the federal government's efforts might end up looking like or how exactly they would affect J&J going forward.

In the Johnson & Johnson earnings report, investors should watch to see how the company plans to balance organic growth and the future of its existing pipeline against the prospects for more acquisitions like its recent bid for Actelion. As more drugmakers turn to mergers and acquisitions to spur growth, J&J has the capacity to use its internal development capacity and existing partnerships to sustain its role as a key leader in the healthcare space going forward.