Please ensure Javascript is enabled for purposes of website accessibility
Log In Help Join The Motley Fool
Free Article Join Over 1 Million Premium Members And Get More In-Depth Stock Guidance and Research
By Tyler Crowe - Apr 20, 2017 at 10:47AM

There is a very real chance that Seadrill Partners, Suburban Propane Partners, and The Buckle will see payout cuts soon.

There's nothing worse than buying a dividend stock and then seeing it slash its dividend payment only a year or two later (trust me, I've experienced my fair share of dividend disappointments). While some dividend cuts can come unexpectedly, others can be seen from miles out. If you are looking to buy dividend stocks, knowing which ones are already at high risk of a payout cut can help you avoid that kind of portfolio pain.

Three companies that look particularly vulnerable to a dividend cut are offshore rig owner Seadrill Partners (SDLP), home heating fuel distributor Suburban Propane Partners (SPH 1.76%), and clothing retailer The Buckle (BKE -0.60%). Here's a quick look at why these companies are headed for trouble and why you may want to avoid them for now. 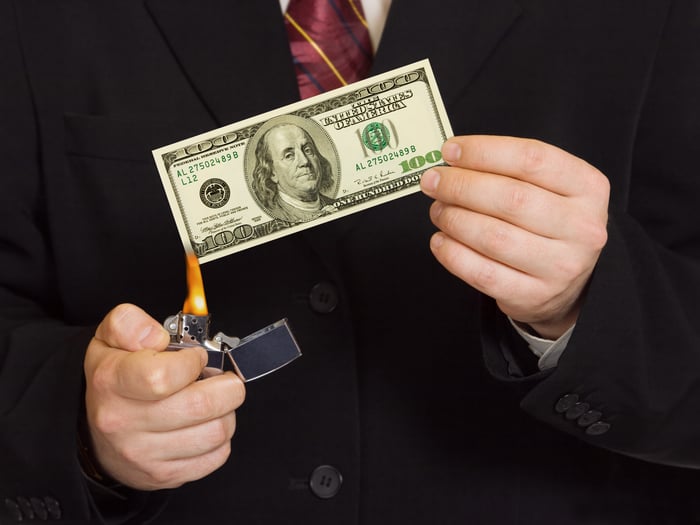 Too much trouble with the parent

There is no scenario where an offshore rig company should be paying any dividend at all, let alone a high-yield dividend. Yet that is where we find Seadrill Partners and its distribution yield of 13.5%. Despite oil prices hovering around $50 a barrel, which has led to an uptick in onshore activity, it hasn't been enough financial incentive for producers to add more offshore exploration and development projects to their plate. As a result, offshore rigs are completing their existing contracts without new work to follow. In Seadrill Partners' case, this has meant three of its nine rigs have rolled off contract, with another two set to expire by September 2017. Without these rigs under contract, cash flows will dry up fast. The partnership has already slashed its payout twice already, but it's highly likely it will happen again.

The problem for Seadrill Partners is that its parent company, Seadrill Limited (SDRL) needs as much cash as it can get its hands on right now. So the parent company will be hesitant to cut itself off completely from the cash source. With several short-term debts due in the coming weeks, Seadrill doesn't have the cash on hand to pay them. Management at Seadrill has already said it's very likely that it will make some drastic moves to restructure the business that will likely lead to significant shareholder dilution. It has even said that Chapter 11 bankruptcy is in the cards of an agreement isn't reached.

Seadrill Partners is trying to sever as many ties with its parent as possible to avoid being dragged down with it. It's looking to remove Seadrill Limited as a guarantor on several of its debts. If it can do so, then it could avoid the fate of the parent. It will also likely mean, though, that Seadrill Partners will cut, or outright suspend, its payout to weather the ongoing storm in the offshore rig environment.

Will the rebound be enough?

Suburban Propane Partners averted disaster in fiscal year 2016. The record warm 2015/2016 winter meant overall propane and heating fuel demand was way down and it wreaked havoc on the company's balance sheet. The company's distribution coverage ratio for the year was only 0.6, which meant it had to tap its cash reserves to pay for 40% of its annual dividend. Luckily, management had the foresight to stash cash in prior winters for just such an occasion, but it left the company with only $37 million in cash at the end of the fiscal year.

This winter wasn't as bad as the prior one, but it wasn't exactly great, either. Suburban's management estimated that total heating fuel volumes for the first quarter of 2017 (which ended Dec. 31, 2016) were up 8%. Higher volumes and cost cuts the company enacted throughout the past year led to a 25% increase in adjusted earnings before interest, taxes, depreciation, and amortization (EBITDA), but it still wasn't enough to start replenishing the cash coffers.

This upcoming quarterly release will be a telling sign as to whether Suburban Propane will be able to maintain its 13.9% distribution yield. This past winter was better than the prior one for propane distributors, but it was still well below what are considered normal temperatures. Unless management can continue to squeeze out some more efficiencies from its cost structure, then there is a real chance we could see a distribution cut soon.

Declining sales will bite into its special dividend

When you talk about The Buckle as a dividend stock, you have to think of it in two ways. One is the rather low regular dividend that is paid quarter after quarter, the other is the special dividend it pays once a year. This policy has been in place since the Great Recession and has handsomely rewarded shareholders. Based on recent results, though, it looks as though that special dividend could be going away soon.

One of the things that made Buckle unique among many other major clothing retailers in the past was that it was brand agnostic. That meant the company could take on or drop clothing brands as they went in and out of style and allowed the business to stay relevant while others fell to the wayside. The Buckle also avoided the trap of sales and deep discounting that so many others in the business rely upon. For years that was a pretty successful formula, but there is one major flaw in that model today: It is extremely vulnerable to online retailing. Without unique brands or a deep discount sale to get shoppers in the door, there is little incentive for people to shop at The Buckle versus going online for the same things.

This trend is absolutely killing the company's sales lately: 52-week same-store sales ended Jan. 28 declined 13.5% compared to the year prior, and same-store results in February and March 2017 were down 23% and 10%, respectively. Granted, the company is debt-free and its capital expenditures are modest compared to its current operational cash flow, so it can still pay out to shareholders. However, double-digit same-store sales declines can only happen for so long before something drastic needs to happen. If The Buckle can't stop the decline in sales, then the company's special dividend will almost certainly go away, and it will only be a matter of time before its regular dividend gets slashed as well.