There are some reasons to believe that CNX Coal Resources' and Abercrombie & Fitch's dividends aren't on the most stable ground.

High-yield dividend stocks can be great investments if those payouts are built on solid footing. In many cases, though, a high yield can be a sign of troubles on the horizon that could make that particular investment toxic for your portfolio. The best way to not have one of these high-yield investments blow up on your watch is look for a few key red flags.

Two stocks that are throwing off some bad signals lately are coal miner CNX Coal Resources LP (CCR) and clothing retailer Abercrombie & Fitch (ANF -3.06%). Here's a look at why these stocks appear to be headed for troubled waters and why investors may be better off avoiding these stocks despite their attractive dividend yields.

Painted into a corner

When CONSOL Energy (CNX -2.44%) spun off CNX Coal Resources back in 2015, the idea was to monetize a portion of CONSOL's coal assets such that it could shift a large portion of its capital spending toward its shale gas program in the Marcellus region. CNX Coal has taken a 25% working interest and operational control of CONSOL's Pennsylvania mining complex. CNX Coal has been marketed as a growth MLP that would buy the remaining 75% stake in the coal mining operations from CONSOL.

The trouble with this strategy: Where that cash will come from? During the fiscal year 2016, CNX Coal beat management's own expectations and sold 6.2 million tons of coal. Despite this outperformance, the company just barely covered its capital spending and distribution requirements for the year. That means there is no excess cash building up to make a future purchase, which implies the company will have to rely on external capital to finance any new acquisitions.

Last September, CNX bought an additional 5% stake in the mining complex for $88.8 million, which it used on some debt and issued preferred shares to CONSOL that will pay either cash or additional units at a rate of 11%. That is a pretty high cost for new capital, but it's lower than the current cost of issuing new stock today with a distribution yield of 13.3%.

That leaves debt as one of the few ways CNX Coal can grow the business, and that can lead to a whole world of trouble. Based on its current net-debt-to-EBITDA ratio of 2.5, the company has a little wiggle room to take on more debt, but not much.

Barring any large gain in coal prices or coal volume -- which isn't expected, as CNX has already contracted out 98% of its 2017 volume -- CNX Coal is faced with the fact that its sources of capital to grow the business are quite constrained. The two best paths forward are to either operate with the ownership stake it currently has for a long time and build up some cash to buy a greater stake, or to slash its payout to use equity. Neither option is really desirable for a growth-oriented master limited partnership. From an investor's standpoint, it may be best to wait until CNX Coal comes up with a better long-term strategy to grow the business.

Taste and fashion can be fickle for retailers, and Abercrombie & Fitch has been on the losing end of those trends for some time. The company has reported declines in comparable-store sales across the company since 2012, and the gains from its Hollister brand have not been enough to offset losses at the A&F brand. Over that time period, net income per share has precipitously declined such that the company recently posted its first normalized EPS loss since the company went public more than 20 years ago. 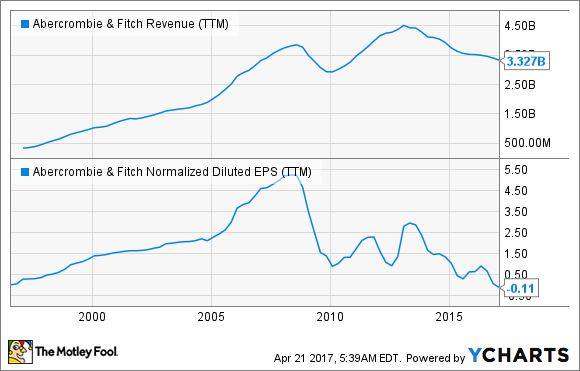 Management has stemmed the tide of declining sales by cutting operating expenses and closing several stores. In 2017, it expects to close about 60 stores and has an opportunity to renegotiate 50% of storefront leases by the end of fiscal 2018.

There are only so many operational patches the company can use to plug the holes created by these revenue declines, though. Even with these initiatives, cash from operations has declined 73% since the fiscal year 2013 to just $184 million. This drop has resulted in the company suspending its share buyback plans, and its current cash outlays for capital spending and dividends are greater than the cash coming in the door.

This really puts the company in a quandary. It needs to invest in the few places where sales are growing -- Hollister and e-commerce -- as well as reboot its signature brand (there already is a new A&F logo and store remodel prototype). That will take away from cash going to dividends, though. Eventually, something is going to have to give, and chances are it will be the dividend.