NVIDIA is perfectly positioned, in nearly every way, for the coming VR market.

There's a lot of buzz around virtual reality (VR) right now and its potential to transform how we interact with technology and video content and as a catalyst for an entirely new computing platform, as Facebook CEO Mark Zuckerberg has suggested.

It's still unclear when, or even if, VR will truly take off -- and even more ambiguous is whether it will truly benefit the companies that are betting on it. But in this space, NVIDIA ( NVDA -4.46% ) is emerging as not just a leader but also a company that's poised to bring in significant gains from its VR pursuits. Here's why. 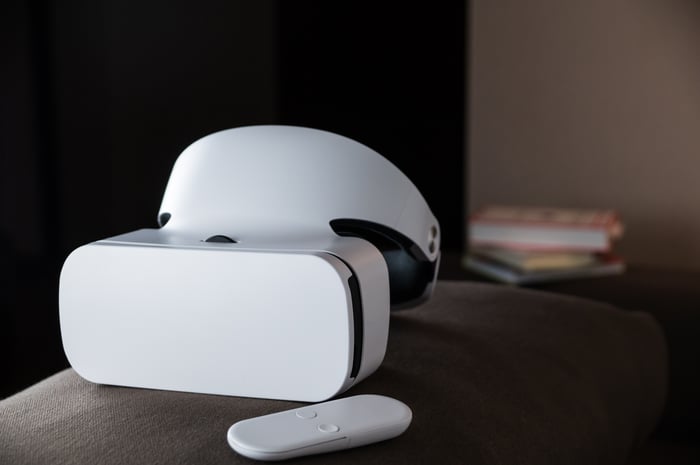 Early last year, NVIDIA itself noted that only 1% of PCs sold in 2016 were capable of running high-end VR devices. The vast majority simply didn't have the processing power to keep up.

AMD has made some market share gains over the past couple of years and could put additional pressure on NVIDIA when it releases its new Vega architecture later this year. But NVIDIA's current lead and its ability to continually release new VR-ready graphics cards (even for notebooks) mean that its GPU sales will likely benefit as the VR market grows.

As Jon Peddie Research noted last year, "VR will be a multi-tier experience, like all entertainment platforms. Consoles will appeal to the casual user, whereas the PC with three to four times the processing power will be the platform for the intense gamer. In the PC market, NVIDIA has a substantial market share in enthusiast graphics boards, the type needed for Oculus and HTC VR experiences."

Aside from its leadership in the GPU space, the company has already created its own VR game and has its own VRWorks suit of APIs for developers to create their own VR games and apps, as well as a separate suit of APIs specifically for VR headset developers. It also has its GameWorks apps that help gamers buildVR experiences, and even taps into the company's deep learning systems to make the process much faster. In short, it's creating both the hardware and some of the tools that developers will need to grow the VR market.

It would take a lot to miss this opportunity

NVIDIA already brings in 58% of its total revenue from selling GPUs in the gaming market, and as PC makers begin to bring more VR readiness to their devices, it's likely that NVIDIA's GPU sales will continue to expand. The move from desktop gaming to VR is a logical step in the gaming space, and there's no reason to believe that NVIDIA won't bridge that gap smoothly.

The huge advantage for NVIDIA right now is that it already has a solid position in gaming, and knows how to build on its GPU strengths and apply them to other markets. Its dominance in the GPU world and its own pursuits in building out new VR-ready graphics cards and tools for developers mean that the only way the company won't benefit from VR is if the market itself flops.