While enrollment is slowing, there's a good reason for it.

A few years back, New Oriental Education (EDU -2.91%) made a key decision. Instead of focusing on test prep for high school students taking English tests to attend university in America, the company would hone in on after-school tutoring for younger Chinese kids.

It wasn't a cheap transition. For a long time, enrollment in the after-school programs was robust, but so was spending on infrastructure and teacher salaries. Therefore, while revenue was booming, earnings simply couldn't keep up the pace.

But that's beginning to change. When the company announced earnings on Monday for its third quarter, it was clear that the profit levers were finally working in its favor. 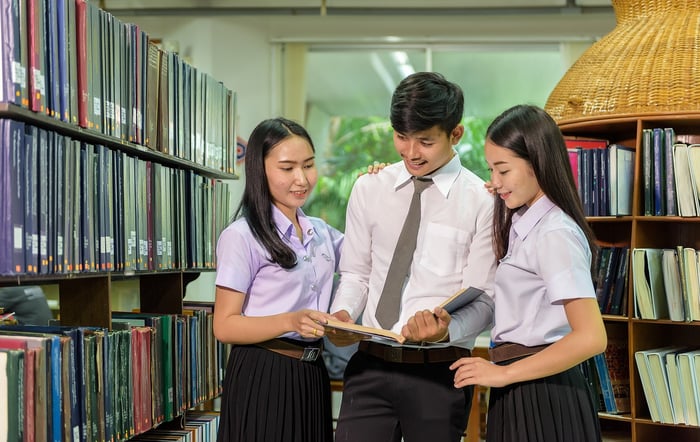 Before we get into the nuts and bolts, let's check out how the company performed on the headline numbers.

This is more or less a 180 from previous quarters, which saw blazing growth of enrollments but muted growth for earnings. Revenue growth would have actually come in at 33% in constant currencies, which is an important distinction.

At the same time, selling, marketing, general, and administrative costs all grew at a slower pace than revenue, which helped juice the company's results.

According to founder and Executive Chairman Michael Yu:

We achieved both accelerated top-line growth and continued solid bottom-line performance in the third fiscal quarter... The main driving force for this was the significant increase in student enrollments in the recent two quarters, which reached a year-over-year growth of 32% for the second and third quarters of fiscal year 2017.

Yu's comment about 32% growth for the combined second and third quarters is important. He's pointing out that one of the reasons for the slower enrollment growth in the most recent quarter was that the composition of the 2017 calendar pushed much of the enrollment toward the end of the previous quarter -- which helps explain the 56%  jump three months ago.

Here's a rundown of other important information from the company's release:

For the next fiscal quarter, management expects revenue to come in between $465 million and $480 million. That represents growth of 18% to 22% in U.S. dollars and 25% to 29% in constant currencies.

Perhaps the most important takeaway is that the company's attempt to pull students into the ecosystem appears to be working. Deep discounts were given at the start in hopes that the students would stay, and that appears to be happening.