Shares of Deutsche Bank AG are surging on the French election results and a stronger euro.

Shares of Deutsche Bank AG (DB 0.90%) are rising by about 11% as of 1:45 p.m. EDT on news that centrist candidate Emmanuel Macron will face far-right candidate Marine Le Pen in a May runoff for president.

Le Pen campaigned on a protectionist message that the European Union is bad for France's economy. Many feared that her election would potentially bring about calls for a "Frexit" from the EU and more instability after the United Kingdom voted to leave the EU in the 2016 "Brexit" vote. 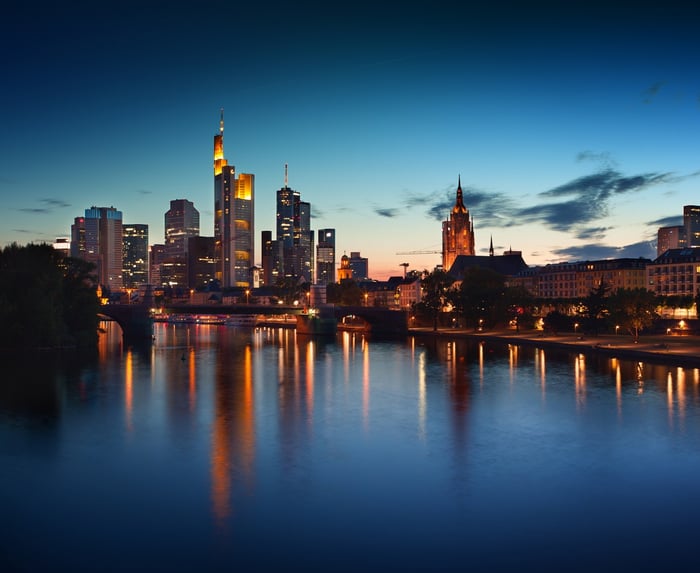 Political observers now see the odds of her election being less likely following the results of the preliminary vote on Sunday. European bond yields, which declined in February as Le Pen's election appeared more likely, threatened to weaken bank earnings, which have suffered due to low yields on loan and securities portfolios.

Deutsche Bank has been particularly hard hit by a sluggish European economy. The company's loan-loss provisions jumped 45% in 2016 due to elevated expectations for credit losses stemming from shipping, oil and gas, and metals and mining industries.

An overnight increase in the value of the euro against the dollar is helping to boost Deutsche Bank's value in the United States, where the stock is traded in dollars. The euro rose about 1.2% against the U.S. dollar following France's election results, adding to its gains in overseas trading.

Investors are willing to pay a higher price for visibility and stability. With Le Pen's election looking less likely, traders were happy to pay up for Deutsche Bank following news of the weekend vote in France.