Uranium miner Cameco is suffering through a downturn not of management's making. The question is, what's it doing about it?

Shares of Cameco Corp (CCJ 2.37%), the largest publicly traded uranium miner, are down roughly 75% from their highs in 2011. That's not an issue of mismanagement -- the entire mining industry has been hard-hit by a commodity downturn. But even though Cameco's management team isn't to blame for the company's woes, what exactly has it been doing about the problem?

The mining industry tends to move in boom and bust cycles. The downturn that started in 2011 has been particularly deep, but in essence no different than other downturns throughout history. Commodity prices rose, miners invested in new projects that would take years to bring on line, and when supply caught up to demand, commodity prices collapsed. Things only got worse as big new projects started producing. 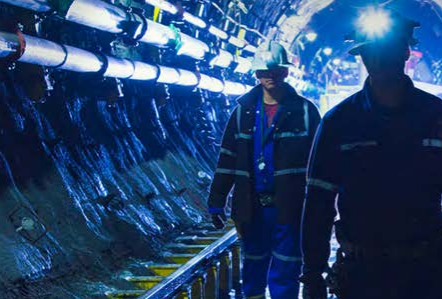 Uranium miners got hit extra hard because of the Fukushima reactor meltdown that took place in 2011 after an earthquake and tsunami. The accident led Japan to shut all of its reactor fleet and pushed other countries, like Germany, to shy away from nuclear power, too. Not surprisingly, those decisions turned into an emotional headwind for uranium prices.

Just how bad did it get? When Cameco released full-year 2016 results, its CEO, Tim Gitzel, noted that uranium spot prices had hit a 12-year low last year. Write-offs pushed the company's earnings into the red. That's not great news, but the vast majority of the problems Cameco is facing are out of its control. In other words, management really isn't to blame for Cameco's woes. 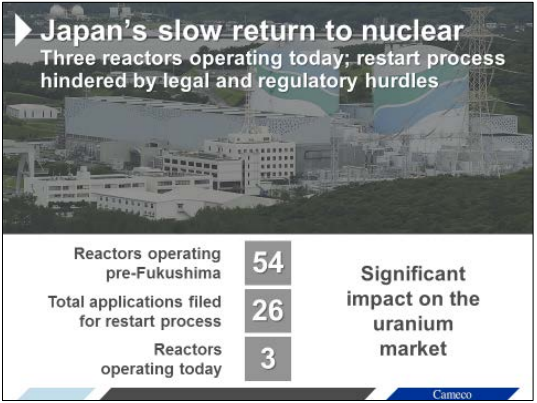 Japan has had a big impact on uranium markets. Image source: Cameco Corp.

What management is doing

Cameco's management hasn't been sitting still waiting for a rebound. It's been actively working to adjust to the new market environment. For example, the write-off was taken because of efforts to reduce production from higher-cost mines. That will help protect Cameco's margins and pull some supply out of the market.

But there's more here than meets the eye. That's because Cameco didn't wait until 2017 to start taking action in response to a tough market. It's been doing a good job throughout the downturn. Case in point: It turned a profit every year through the downturn except last year. And if you take out the one-time charge in 2016, the company would have made money. That's an impressive showing during a downturn that's pushed more than one miner into bankruptcy court.

The key to Cameco's success is a focus on long-term contracts. These can limit the upside when prices are rising, but they clearly help protect the downside when prices are falling. For example, in 2016 Cameco's average contract price was a full 60% higher than the spot price. That's not luck; it's a management decision. 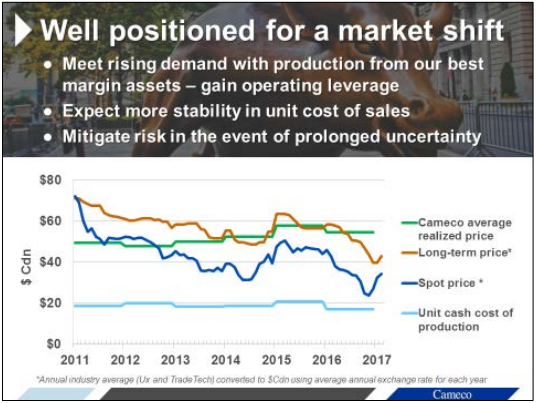 And conservative decisions like that have helped Cameco weather the uranium downturn in relative stride. For example, while its dividend hasn't been increased, it hasn't been cut either. And debt remains at a modest 20% or so of the capital structure. That says a lot about management's choices and is a testament to the company's solid financial foundation.

Ready for an upturn

In the end, Cameco is working through a very difficult period in the uranium market. The biggest headwinds, including weak uranium prices and a nuclear power plant meltdown, were basically out of management's control. For the most part, Cameco's management isn't to blame for the miner's current woes.

But management can take credit for positive developments that resulted from its decisions, such as conservative business practices and the use of modest levels of leverage. Thanks to those steps, Cameco has long been prepared to deal with adversity, and that shouldn't change any time soon. On balance, Cameco is easily one of the best ways to invest in uranium today.