3D Systems(NYSE:DDD) is slated to report its first-quarter 2017 earnings after the market closes on Wednesday, May 3. It's on track to be the first of the two leading diversified 3D printing companies to report, as prime rival Stratasys is scheduled to report on May 16.

This will be the fourth quarterly report that covers a period for which Vyomesh Joshi has been CEO, as he was hired in April 2016.

To provide some context -- though investors shouldn't give much weight to Wall Street's short-term estimates -- analysts expect 3D Systems to deliver adjusted EPS of $0.11 on revenue of $156.3 million, representing year-over-year growth of 120% and 2.4%, respectively. 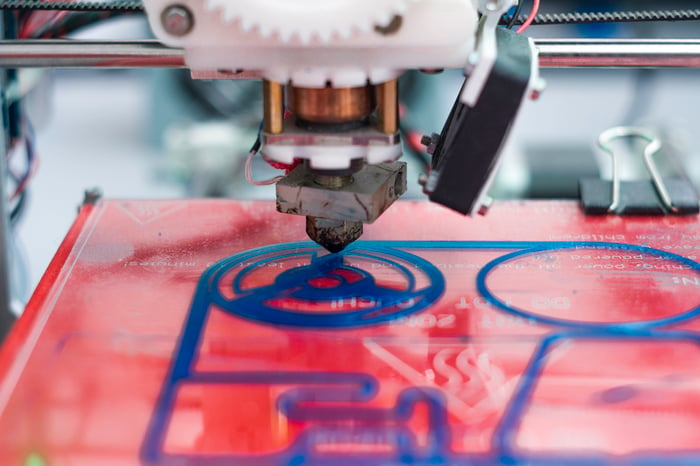 1. Revenue from sales of 3D printers

Investors' primary focus, in my opinion, should be on the revenue 3D Systems generated in the quarter from sales of 3D printers, which the company has traditionally broken out from its broader product category sales. We'd obviously like to see an improvement on this front.

3D Systems' healthcare business, which includes both products and services, has generally been a bright spot amid what's proved to be challenging overall 3D printing market conditions since 2015. We'd like to see this revenue growth driver continue to chug along. (The company only breaks out revenue, not operating income or any form of earnings.)

As for benchmarks, the healthcare business' year-over-year revenue increased 12%, 11%, and 23% in the first, second, and third quarters of 2016, respectively, and 5% in full-year 2016. As with 3D printer revenue, 3D Systems did not break out the year-over-year revenue change in the fourth quarter of last year. However, it's obvious from the numbers we do have that the healthcare business performed poorly in the fourth quarter.

One thing investors should keep in mind is that healthcare revenue and total revenue will get a boost from the company's January acquisition of NextDent's portfolio of 12 dental materials, which have regulatory approvals in numerous countries. Ideally, 3D Systems will also provide an organic growth rate for its healthcare business, stripping out the revenue contribution that this acquisition made in the first quarter, so we can compare apples to apples. (Organic growth is growth in businesses owned for at least one year.)

Hopefully, management will provide some information on the conference call about interest in Figure 4, which is 3D Systems' next-generation technology designed for the production of plastic parts. Figure 4 is a robotic, modular stereolithography (SLA) 3D printing system that the company claims is up to 50 times faster than conventional SLA 3D printing systems.

For background, 3D Systems introduced Figure 4 in early 2016, demonstrated it at a major industry trade show in the fall, and announced in March that it had recently shipped its first system to an unnamed "Fortune 50 industrial customer." At the same time, the company also unveiled a Figure 4 platform designed for dental applications, which it expects to be available for delivery this fall.

And the metals business?

Like many investors, I'd like to know how 3D Systems' metals business is performing, but I don't think the company will release this data. Hopefully, management share a little color on the earnings call about this business.

My guess -- and this is an educated guess only -- is that revenue in the metals business has stagnated at best since the company ceased breaking out the performance of this business. What we do know is that in 2014, the metals business accounted for about 6% of 3D Systems' total revenue.