Please ensure Javascript is enabled for purposes of website accessibility
Log In Help Join The Motley Fool
Free Article Join Over 1 Million Premium Members And Get More In-Depth Stock Guidance and Research
By Timothy Green – Updated Jun 14, 2017 at 10:36AM

Quarterly earnings reports from NVIDIA, Cisco, and Wal-Mart are on tap for May.

With quarterly reports scheduled to release in May, these companies deserve special attention. Shares of NVIDIA soared last year as the company's gaming business exploded, but the graphics chip specialist now needs to prove that it can sustain that rapid growth. Cisco stock is near its decade high even as its core business stagnates, and the company will need to convince investors that its software and services strategy can drive growth once again. And Wal-Mart, after a string of aggressive e-commerce moves, faces the challenge of catching up to Amazon while maintaining the bottom line.

Here's what to look for in these three upcoming earnings reports.

The big question going into NVIDIA's first-quarter earnings report on May 9 is whether the company can sustain the incredible growth of its gaming business. While NVIDIA's enterprise and automotive businesses garner plenty of headlines, the gaming business has been the main driver of the recent surge in revenue and profit. 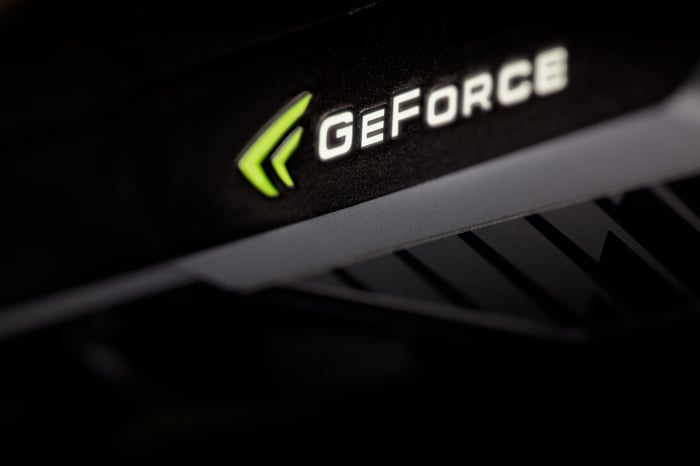 During the fourth quarter, gaming revenue surged 66% year over year to $1.35 billion, driven by both strong sales of the company's GeForce graphics cards and revenue from the Nintendo Switch. NVIDIA expects a sequential decline in revenue during the seasonally weak first quarter, but its guidance still calls for a solid year-over-year revenue increase.

Advanced Micro Devices will be launching its Vega high-end GPUs in the next two months, providing some competition for NVIDIA, which has dominated the high-end portion of the market for the past few years. NVIDIA's second-quarter guidance may provide some clues as to how big of a threat NVIDIA views AMD.

NVIDIA's stock has surged over the past year, up nearly 200%. The elevated stock price comes with lofty expectations, and any sign that NVIDIA's gaming business is slowing down could lead to a steep decline.

The story at Cisco, the dominant networking hardware company, is one of reinvention. The company is pushing both software and services as it aims to diversify away from its core business. Acquisitions have been a key tool, and Cisco has shown that it's willing to pay a high price to build out its software portfolio. The $3.7 billion purchase of AppDynamics in January and the recent $610 million purchase of networking start-up Viptela are just two examples.

The networking giant will report its fiscal third-quarter results on May 17. Analysts are expecting a slight decline in revenue and a slight increase in adjusted earnings per share, with the smaller growth businesses not quite offsetting sluggishness elsewhere. Both the switching and routing segments posted year-over-year revenue declines during the second quarter, while service revenue jumped 5% and security revenue soared 14%. The third quarter will likely look similar.

Despite Cisco's stagnating revenue, the stock is near its highest level since the dot-com bubble nearly two decades ago. Investors may be buying into the company's software story, and Cisco's cash-rich balance sheet gives it plenty of ammunition to continue to make acquisitions. There likely won't be too many surprises in Cisco's third-quarter report, but expect management to talk up the software business.

Wal-Mart is no longer sitting idly by as Amazon scoops up an increasing percentage of retail sales. The company's e-commerce operations are now led by Marc Lore, who was the CEO of Jet.com prior to its acquisition by Wal-Mart for $3.3 billion. It now offers free two-day shipping on orders over $35, free pickup of online grocery orders, and discounts on certain online items that are picked up in-store.

Wal-Mart will report its first-quarter results on May 18, and e-commerce sales growth will be a closely watched number. It managed to grow online sales by 29% year over year during the fourth quarter, a pace it will need to maintain to have any chance at catching up with Amazon.

Amid the e-commerce push, the stores are performing well. Wal-Mart has racked up a long streak of comparable-sales growth in the U.S., and it will look to continue that growth by focusing on offering the lowest prices. Its goal is to offer prices that are 15% lower than its competitors 80% of the time, a move that targets both brick-and-mortar retailers like supermarkets and online retailers like Amazon.

This focus on e-commerce and low prices won't be cheap, and investors should expect earnings to continue to lag revenue as the company builds up its online business. Analysts are expecting a slight increase in revenue and a slight decrease in earnings for the first quarter, a trend that will likely persist for the rest of the year.

Walmart and Oracle's Bid to Acquire TikTok is Dead. Now What?
351%