The mortgage lending arena has been one of the most prominent targets of regulators over the past decade, and mortgage servicing company Ocwen Financial (NYSE:OCN) has been in the crosshairs of government overseers for a long time. Despite solid efforts to resolve past issues, Ocwen got bad news from the Consumer Financial Protection Bureau last month, as the federal regulator filed suit alleging costly errors in its mortgage operations.

Coming into Wednesday's first-quarter financial report, Ocwen investors anticipated revenue weakness and more red ink from the company, but they wanted to see signs of forward progress to resolve outstanding issues. Ocwen's results were mixed, but they were enough to convince investors of the fundamental strength underlying the business and its future prospects. Let's take a closer look at Ocwen Financial and what it said about the past few months. 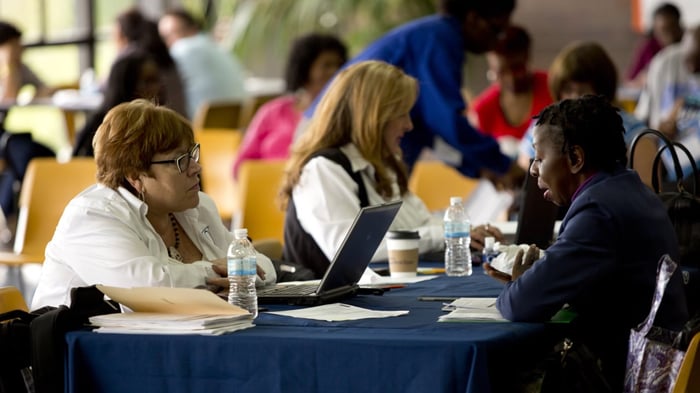 Ocwen Financial's first-quarter results weren't pretty, but they also weren't as bad as some had feared. Revenue was down 3% to $321.9 million, but that was a far cry from the 8% drop most investors were expecting to see. Net losses narrowed by more than 70% to $32.7 million, and that produced a per-share loss of $0.26. Although that figure was worse than the consensus forecast for a loss of $0.19 per share, Ocwen's GAAP figures included one-time items for litigation reserves, regulatory monitor costs, and various other items that represented about 40% of its pre-tax losses for the quarter.

Taking a closer look at the report, Ocwen's servicing segment got a lot healthier. Revenue was down nearly 8%, but the company slashed expenses by more than a fifth, improving margin dramatically. With an impressive decline in other costs allocated to the segment, servicing pre-tax profits came in at $3.1 million, turning around a $66 million loss in the year-ago quarter. Ocwen attributed the better performance to lower legal fees, a more stable bond rating, and general efforts to cut costs during the quarter.

Fundamentally, Ocwen's business showed some interesting trends. Delinquencies were down by half a percentage point over the past three months to 10.7%, showing strength in the economy. Ocwen completed nearly 18,400 loan modifications during the quarter, of which roughly half were done under the federal Home Affordable Modification Program. Mortgage originations were split roughly three-to-one between conventional mortgages and reverse mortgages., and prepayment rates on mortgages continued to drop.

What's ahead for Ocwen?

CEO Ron Faris was happy about the progress  Ocwen made with its business. "I am pleased that our servicing business had its third consecutive profitable quarter," Faris said, "and that our origination business returned to profitability this quarter."

Despite recent regulatory allegations, which we believe unfairly characterize our progress and current performance, our recent reviews have not identified past or present systematic issues with our foreclosure sale processes, which is always a last resort for us.

The company can point to its experience with monitoring from California and New York government entities, which ended during the quarter.

Ocwen did get a vote of confidence earlier in the week from industry peer New Residential (NYSE:NRZ). The two companies are working together toward an agreement to enhance their relationship, with a possible transfer of roughly $117 billion in mortgage servicing rights to a traditional subservicing arrangement involving a $425 million upfront payment to Ocwen. New Residential would also take an almost 5% equity stake in Ocwen.

Ocwen investors were satisfied with the mortgage servicing specialist's performance, and the stock climbed 4% in pre-market trading following the announcement. There's still considerable uncertainty with respect to the CFPB lawsuit, and investors want more evidence of growth potential going forward. However, Ocwen isn't giving up, and strength in the mortgage business generally should help it with its recovery efforts going forward.